How Conflict in Iraq Has Made Women and Girls More Vulnerable

Iraq has seen decades of conflict, from war with Iran in the 1980s to the 1991 Gulf War, the U.S. invasion in 2003, and most recently the brutal fight against the terror group ISIS.

The years of turmoil have widowed women and orphaned children, further worsening the conditions in which they live. In Iraq’s Secret Sex Trade, FRONTLINE and the BBC examine one aspect of how deepening poverty and weakened state institutions have made women and girls more vulnerable to exploitation, investigating an illegal sex trade carried out by some clerics under the guise of religious sanction.

But this disturbing trend is just one consequence of the devastation of postwar Iraq. Oxfam and UN Women released a report on the country last year partly based on interviews with Iraqi women, activists, government representatives and experts, who raised concerns about everything from domestic violence to the barriers women face to participating more fully in politics.

“Even before a lot of the conflict started — and we’re talking about 2003 primarily — there was a lack of gender equality in Iraq, across the country,” said Daryl Grisgraber, humanitarian policy lead at Oxfam America. “Economic disempowerment, social disempowerment and the general state of governance all unfortunately worked against women. And all of those things have been really aggravated by the conflicts and the aftermath.”

Around 85 percent of women age 15 and up, don’t participate in Iraq’s labor force, putting them at higher risk of falling into poverty — though they may take part in the informal economy doing work like sewing or handicrafts. A survey conducted in 2012 cited by the Oxfam report indicated that 35 percent of women who didn’t work were willing to, if the right opportunity came along.

Women who do have formal jobs face harassment and intimidation in the workplace, as is often the case elsewhere, and still don’t receive the same salaries as men for equal work. That’s in part, Grisgraber said, because they are generally expected to remain responsible for life at home.

Iraqi women are the heads of household in one in 10 households, according to the United Nations Development Program in Iraq, and around 80 percent of that population are widows. Losing the main male figure of their household might leave them as the primary breadwinner for the family.

“A widow who’s raising four children — she might be able to find a job, but it’s going to be harder for her,” Grisgraber said. “She’s going to be looked at with some suspicion. She’s going to be much more vulnerable to sexual violence and gender-based violence, and she’s generally going to have fewer chances for access to things like the judicial system or better education or the workforce, than a woman who’s not in that position.”

The Oxfam/UN Women report noted that during recent years of conflict, more women filled jobs traditionally held by men. But the Iraqi women told interviewers they don’t expect that to lead to long-lasting change once the situation improves.

As women struggle to rebuild their lives, many are also dealing with the loss or disappearance of their loved ones. When ISIS captured Mosul and other territory in Iraq in 2014, it rounded up thousands of soldiers, police and government employees and took them away. Most are presumed dead, buried in one of the many mass graves in the area, said Belkis Wille, Human Rights Watch’s senior Iraq researcher. But the families were never notified of their deaths.

“You come across a lot of families who still believe their loved ones are alive,” she said. The uncertainty is particularly cruel. Women whose husbands disappeared during the war have a hard time remarrying without a death certificate. And as they grieve, they must also find a way to survive. “They’re living day by day, trying to get handouts from family members, from local charities,” she said.

Additional hurdles for the displaced

Women who lived in areas that were re-taken from ISIS or were displaced by fighting are often suspected of being ISIS sympathizers, and therefore deprived of certain services and opportunities. For example, Wille’s report from June noted that an Interior Ministry official estimated 250,000 people could not return home due to objections from authorities over their perceived ties or sympathies for ISIS.

“If they’re Sunni Arab and their husband is gone, there’s usually a presumption that he was ISIS,” Wille said. “They’re being punished because they’re seen as ISIS-affiliated.”

Many of these families also lack documentation, making it harder to access services or move freely. Around 80,000 families are estimated to have family members missing at least one document, such as an ID card or birth or marriage certificate, per a September report by the Norwegian Refugee Council. At least 45,000 displaced children living in camps are estimated to be missing birth certificates. Some lost their documentation as they fled the fighting, some may have had papers confiscated by fighters, and some who lived in territory controlled by ISIS were issued documentation by the terror group, which set up its own bureaucracy.

Lacking the proper papers “limits access to formal employment, government schemes for compensation for damaged housing, and opportunities to own or rent property,” the NRC report noted. People without papers also face a higher risk of being detained or arrested.

Basma Alloush, advocacy and communications officer for Norwegian Refugee Council USA, said the lack of legal documentation is “essentially creating a paperless — could lead to potentially stateless — population that don’t have access to schools, don’t have access to health care.” These families are also becoming more dependent on aid and humanitarian assistance, she said, because of the lack of documents, and the stigma and marginalization surrounding their situations.

Many such families still languish in camps despite the end of fighting, with little freedom of movement. Wille said HRW knows of cases where women have faced sexual exploitation and abuse in these camps, or have had to engage in sex in order to get food or other basic necessities, or even to get permission to go to the hospital. Amnesty International also documented sexual exploitation and violence at these camps in a report released last year.

“The conflict with ISIS has had very particularly damaging effects for women and children, even more so than what came before,” Grisgraber noted. “Women in Iraq are starting out with disadvantage and every conflict and every wave of displacements only deepens the difficulties for them.” 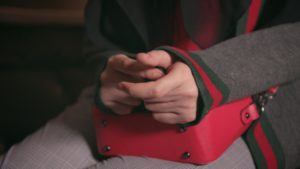