How States and Cities Are Bracing for the Next Disaster

A non-profit worker in Staten Island shows which areas of the New York bureau were flooded during Superstorm Sandy.

Along the east coast and Gulf region, communities have been facing an increasing threat of inundation from storms. The stakes are high. Flooding is the most costly natural disaster in the United States, costing an average of $8 billion in damages annually — and now it’s also the most deadly. Floodwaters killed more people than any other kind of natural disaster last year.

Yet preparations for coming disasters in many states are still hamstrung by political divisions, financial constraints, bureaucratic red tape and pushback from developers and residents who want to build in at-risk areas, according to climate and industry experts.

The center has been tracking planning for climate change mitigation at the local, state and regional level. Two years ago, the most recent year for which data is available, only 14 states had a plan in place to prepare for the risks posed by climate change; nine more were working on one. The rest had no finalized plan.

“It’s probably safe to say Republicans are less likely to take climate change seriously and more likely that Democrats are more likely to take climate change seriously,” said Robert Moore, a senior policy analyst at the Natural Resources Defense Council. The best indicator, he added, is “do you have leadership that actually recognizes that there’s a problem that needs solving, even if that solution isn’t going to benefit you during your term in office?”

It can be difficult for cities to take action on their own, because often they need funding and cooperation from surrounding municipalities and state agencies to implement broader change. Georgetown’s tracker found that in states without a comprehensive plan, only a handful had local, regional or agency level plans in place.

Despite the political dynamics, some communities are starting to take action, particularly those who have faced disasters or see an imminent threat, noted Arroyo, who said she’s sat in on statewide planning meetings around the country. “It is sinking in for some places that are vulnerable and aren’t going to be more resilient because the land is subsiding and sea levels are rising and they have to think of a plan B,” Arroyo said. “You could see the light bulb going off in people’s heads.”

In southern Florida, for example, several communities have banded together to form a regional compact to mitigate climate change, which includes efforts to monitor and restore Florida’s coral reefs and provide financial incentives to businesses to become more energy efficient.

Cities like Seattle, Portland and Chicago have invested in “green” infrastructure, building up the amount of grass and foliage in city spaces to both decrease storm water runoff, filter pollutants and cut down on urban heat. San Francisco has reinforced part of its bay shoreline with oyster reefs and grasses to help minimize erosion and provide a habitat for native wildlife. In the wake of Hurricane Katrina, New Orleans has built a bigger storm surge barrier and requires homes in some areas to be elevated above projected flood levels.

The federal government is trying to push states to do more to prepare for disasters. Every five years, states must submit reports to the Federal Emergency Management Agency detailing their vulnerability to disasters and what steps they’re taking to address them. Beginning this year, at the risk of losing federal funding, the plans must also include considerations of the effects of climate change.

While FEMA has limited pre-disaster funding available, the Department of Housing and Urban Development has begun providing support for some communities facing imminent threats. Earlier this month, a tiny community in Louisiana relocated with a $48 million federal grant. The 60 residents of Isle de Jean Charles are the first to be completely relocated with federal assistance. The U.S. is also providing nearly $1 billion to 13 states and communities already devastated by disasters to invest in infrastructure and resilient housing that can withstand future flooding.

Constructing or redeveloping homes, business and government buildings to ensure they can withstand major disasters — what is known as building for resiliency — can be costly. Absent federal funding, expenses must be borne by developers and homeowners, who may be reluctant to pay more up front for something that may or may not happen to their property in the years to come.

And building codes — which set baseline standards and are adopted at-will by local bodies — are still catching up. Only 65 percent of the U.S. population lives in an area covered by building codes, according to FEMA. In many of those communities, codes are often out of date.

Even in areas with up-to-date codes, resiliency is a relatively new concept, according to Ryan Colker, director of the consultative council at the National Institute of Building Sciences. “The code is very much focused on life safety — that if there’s a hurricane or earthquake that people have time to get out,” he said. “It’s not about the long-term functionality of that building.”

Meanwhile, the coasts are becoming increasingly crowded, with a population increase of 39 percent since 1970, according to the National Oceanic and Atmospheric Administration’s National Ocean Service. That increase is expected to grow more than three times faster than the total U.S. population, at a rate of 37 people per square mile, through 2020. 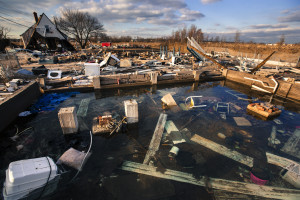