Maria Ressa on Covering Duterte, Her Upcoming Verdict & the Fight for the Free Press

Independent journalism is an essential component of a functioning democracy, but reporters in the U.S. and across the globe have come under attack for doing their jobs.

The story of Maria Ressa, one of the most prominent journalists in the world, is a case in point.

The co-founder of the independent Philippine news site Rappler.com, Maria was named a TIME Person of the Year for Rappler’s tough reporting on President Rodrigo Duterte, his brutal war on drugs, and his weaponization of social media to spread disinformation and target critics.

That coverage has been met with an escalating government crackdown — and this Monday, Maria expects to learn whether she’ll be sentenced to prison time on cyber libel charges.

As she awaits the verdict, I spoke with Maria from her home in the Philippines about her ongoing commitment to accountability journalism, Duterte’s crackdown on the press, and how she’s preparing for what happens next.

“You know, I gave a commencement speech at Princeton University for the class of 2020. And one of the three things I told them was, ‘whatever it is, you have to embrace your fear,’” Maria tells me in today’s special episode of our FRONTLINE Dispatch podcast. “And that’s what I’ve spent the last few days doing.”

We’ve just announced that we’ll be featuring Maria’s story in a new documentary, A Thousand Cuts, that will see a summer theatrical release and a fall FRONTLINE broadcast.

And tomorrow morning at 8/7c, you can join me, Maria, the film’s director Ramona Diaz, and Dr. Julie Posetti of the International Center for Journalists for an exclusive virtual conversation about reporting, truth, power and democracy.

Maria’s conviction about what she does is undaunted. “All it has done is to make us stronger in our intent to continue to hold government to account,” she told me about what she’s faced.

You can listen to “Maria Ressa, Duterte & the Fight for the Free Press” from the FRONTLINE Dispatch on Apple Podcasts, Stitcher, RadioPublic, Google Podcasts or wherever you get your podcasts.

I hope you find her words and her story as important and timely as I do. 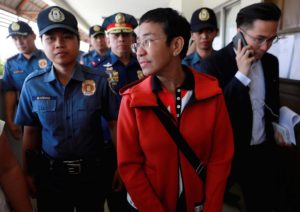 Maria Ressa, Duterte & the Fight for the Free Press