The biggest war-crimes case out of the war in Iraq came to a close this morning when Staff Sgt. Frank Wuterich pleaded guilty to one count of dereliction of duty in the November 2005 deaths of unarmed Iraqi civilians in Haditha.

Wuterich’s sentencing hearing will begin tomorrow.  The maximum sentence for negligent dereliction of duty is three months imprisonment, two-thirds forfeiture in pay for three months, and reduction in rank to E1 (private, the lowest enlisted rank and pay scale).  Lt. Col. David Jones will determine Wuterich’s sentence, which will then be sent to Lt. Gen. Thomas Waldhauser, the “convening authority,” for a final adjudication.  The convening authority can reduce the sentence or leave it unchanged.

Wuterich’s guilty plea comes after a dramatic few days in court last week; on Wednesday a judge abruptly halted the court-martial, dismissing the jury and telling the prosecution and defense attorneys to explore “other options.”

But on Friday, the trial resumed, suggesting that any negotiations over a possible deal had failed.

Wuterich is one of eight Marines who were charged in the case. Over the past several years, charges against the seven other Marines were dropped, dismissed or fell apart in court.

Depending on tomorrow’s sentencing, Wuterich may be the only Marine to serve prison time in the case; the judge or convening authority could also decide that Wuterich deserves no additional punishment beyond the guilty plea itself. 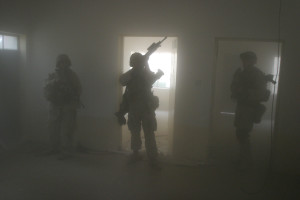