by
Sarah Childress
Cliffhanger, FRONTLINE’s investigation inside how Washington has failed to solve the country’s debt and deficit problems, airs tonight at a special time on the night of President Obama’s State of the Union address. Check your local listings to find out when it will be broadcast on your local station.

The self-proclaimed “Young Guns” began plotting their rise just as many Republicans feared the party was doomed.

But Eric Cantor, Kevin McCarthy and Paul Ryan, three young House Republicans, had a plan to move the party away from the dusty establishment and into the 21st century.

“They fancied themselves the new Reagan revolution, but they represented a conservatism that Ronald Reagan never even attempted,” said Jackie Calmes, who covered their rise for The New York Times. “And it was an uncompromising conservatism, when in fact, as we remember, Ronald Reagan compromised many times. … They represent the face of a Republican Party that has moved ever-rightward as the base of the party moved South and West.”

The Young Guns created a model for candidates who shared their values that explained the steps that they could take to running for office. They set up a website, wrote a book, and started looking for strong candidates who could run for office and take back the House in 2010.

The trio also produced an ad, bedecked with American flags, that critiques the gridlock in Washington and promises a “better way.”

Each Gun contributed a set of skills that, when combined, would allow them to become arguably the most influential triumvirate in Washington.

Smart and ambitious, Cantor rose quickly through the ranks of the House leadership. He was first elected to the House in 2000 election and was appointed chief deputy whip in 2003. When the mood shifted in the party as Obama came into office, Cantor, then the House minority whip, pivoted to position himself as a reformer, aligning with newcomer Paul Ryan.

Cantor became House majority leader in 2011, when the Republicans took back the House. As House Speaker John Boehner’s heir apparent, he served as a kind of go-between for the Tea Party and the establishment. It was a difficult line to walk: While he had the respect of the Tea Partiers, he only had their loyalty as long as he remained aligned with their values. “In a sense, the battle between Boehner and Cantor is a sort of battle for control of the soul of the Republican coalition,” Joshua Green, a Bloomberg Businessweek reporter, told FRONTLINE.

Well-liked and trusted by many House Republicans, McCarthy had an eye for recruiting new talent outside of traditional beltway politics. He helped find many of the 87 when he was nearly a freshman himself, having served only two terms by the time the House flipped in 2010. “He understood that you couldn’t send to Washington the same old political crap and expect them to get elected, that you had to find people who came from outside the world of politics if you really wanted to seize that majority,” Frank Luntz, a Republican strategist, told FRONTLINE.

Gregarious and friendly, McCarthy spent time with the freshmen, heading out on early-morning bike rides and holding pizza parties in his office. His closely cultivated relationships meant that he knew better than Boehner or Cantor where the votes would fall when it came time to count them.

Ryan was considered the intellectual leader of the conservatives, and his work on the budget would position him as an ideological leader of the Republican Party. Ryan’s budget, which he called the Path to Prosperity, offered a bold new blueprint in line with Tea Party values: slashing entitlements, lowering taxes, and curbing debt. Instead of only opposing the president, Republicans now had a plan to stand behind.

As good a salesman as he is a policy wonk, Ryan was able to sell the plan to the Tea Party Republicans, gathering grassroots support to push the Republican leadership to get on board.  “Paul Ryan is simply the best communicator on a face-to-face, 10-to-one, 100-to-one, a million-to-one,” Luntz told FRONTLINE.

As they saw the Tea Party anger forming, the Young Guns sensed an opportunity to capitalize on the grassroots movement in a way the Republican establishment did not. Kevin McCarthy, for example, was the one who first took Boehner to a Tea Party gathering in April 2010 to show him the power the movement had gathered.

The Young Guns decided to bring some of that Tea Party anger to the House. They set up a SuperPAC, the YG Action Fund, and they found new candidates to support, many of whom had never been in office before. They spent time in local districts and taught them the basics of running a campaign. The Young Guns said that 62 of the 90 candidates they backed in 2010 were elected to the House, helping to form the base of a new Republican majority.

“A number of the freshmen really felt like they owed McCarthy and Ryan and Cantor for this,” Jason Zengerle, a contributing editor at New York magazine and GQ told FRONTLINE. “They were accessible at all times. Cantor would call them on the phone nightly to check in: ‘How was your day? How’s the money? How’s the fundraising going? How’s your family holding up?’ So that by the time these guys got to the Hill, they didn’t maybe know John Boehner, but they knew Cantor because they’d been talking to him all the time, and he had been just absolutely generous with his time in trying to help them get elected.”

Because of their investments and their own ideology, the Young Guns understood the Tea Party in a way that the Republican establishment didn’t. McCarthy started holding what came to be called “listening sessions” on Tuesday, Wednesday and Thursday nights for any of the 87 freshmen who cared to come. Ryan taught them about his budget, and listened to their concerns. They discussed any major bill the leadership thought would be controversial. They talked about the implication of the debt ceiling.

In a sign of the Guns’ growing influence, Boehner backed Ryan’s budget when he assumed the speakership. “John Boehner blessed what Paul Ryan did,” Calmes, The New York Times reporter, told FRONTLINE. “It’s a reflection of just how powerful this group of younger, more militant and ideologically conservative members [was].”

Despite being Tea Party rockstars, the Young Guns understood as the debt-ceiling negotiations progressed that they didn’t have full control over the freshmen caucus.

“I don’t think it’s a full-throated loyalty,” Matt Bai, a reporter for The New York Times, told FRONTLINE. “In other words, it’s not as if the Tea Party caucus, if you want to call it that, is sitting around saying, ‘Well, when Eric Cantor says jump, we jump; and if Eric Cantor’s good with a deal, well, darn it, we’re good with it, too.”

For instance, when Boehner drew up his Plan B in December last year, hoping to rally the Republicans around a plan and force the White House to bargain anew, the House leadership worked to get the freshmen to support it. As the whip, McCarthy called them to his office the night of the vote for take-out from Chick-fil-A. They ate the sandwiches, but refused to back Plan B. Without enough votes to pass it, Boehner was forced to pull the bill from the floor in a major embarrassment for the leadership.

The Guns also had mixed success in supporting candidates in the 2012 election. The YG Action Fund, the Guns’ SuperPAC, together with the YG Network, a 501(c)4, said they spent more than $10 million in the 2012 election, focusing on next-generation conservatives running in primarily Democratic districts. Of the 10 incumbents they supported, six kept their seats. They also backed 17 new candidates, but only seven won their races.

The three original Young Guns still have their positions in the House. But the dynamics of their alliance seem to have shifted. Since the election, Ryan has moved to a more prominent leadership role in the House. Boehner reinstated Ryan on the powerful Budget Committee and made him part of the House negotiating team on the fiscal cliff deal. The two have developed a closer relationship: Ryan sided with Boehner in voting to pass the tax deal. Cantor, however, did not.

In a recent interview, McCarthy announced the House Republicans’ new plan last month to force the Senate to pass a budget or forgo their paychecks. He also blasted Obama for appearing too partisan in his inaugural address.

The House majority leader, meanwhile, has stepped out on his own to to address concerns among some Republicans after the election that the party must change to survive. Cantor gave a speech on Feb. 5 that sought to recast Republican policies in a gentler light, pivoting for a moment from the debt negotiations to emphasize the need to improve education, reform immigration policy and lowering health-care costs. “Our goal — to ensure every American has a fair shot at earning their success and achieving their dreams,” he said, outlining a plan he said the House would pursue over the next two years. 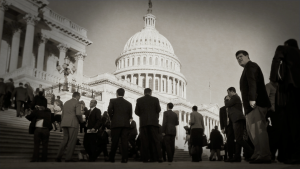