Jon Corzine and other former executives of MF Global Holdings Ltd. could face claims for negligence and breach of fiduciary responsibility, the trustee working to recoup an estimated $1.6 billion in missing customer money said on Monday.

In a 275-page report [PDF] issued today, James W. Giddens details the chaotic final days that culminated in MF Global’s bankruptcy filing in October 2011. Giddens’ report concludes that as MF Global sought to transform from a traditional commodities brokerage firm into a full-service global investment bank, its management failed to properly prepare for the strains on “global money management and liquidity” that such a strategy would present.

The strategy was largely centered around bets on European sovereign debt, which, according to the report, peaked at $7 billion in October 2011. The plan took on “a level of risk that was orders of magnitude greater than the relative exposure at other, larger institutions” he wrote. When the investments soured, MF Global quickly unraveled, and as the firm neared collapse, client money was allegedly misused to fund the brokerage’s obligations at other institutions.

Management’s failures, Giddens wrote, “resulted in customer property being used during the liquidity crisis to fund the extraordinary drains elsewhere in the business, including margin calls on European sovereign debt positions.”

Giddens did not offer recommendations on whether MF Global executives should face criminal action, but did say he would decide on whether to file suit against top officers within 60 days. Among those named by Giddens as possible litigation targets were Corzine, the firm’s former CEO, Henri Steenkamp, its former chief financial officer, and Edith O’Brien, its former global assistant treasurer.

“As trustee, I will make every effort to ensure that such claims result in the greatest possible returns to customers in an efficient and fair manner,” Giddens said today.

The report also provided an update on the trustee’s effort to recover client funds from outside firms. Giddens said he is in discussions with JPMorgan Chase over transfers he believes “may be voidable or otherwise recoverable.” MF Global counted JPMorgan among its largest creditors, and according to congressional testimony, it transferred $200 million to the bank before its collapse to help cover a $175 million overdraft. To date, JPMorgan has returned $89.2 million in customer money and $518.4 million in separate MF Global assets. Giddens warned he may file suit against the bank if both sides are unable to agree on further returns.

Giddens added he was also investigating transactions with Bank of New York Mellon in the week before MF Global’s bankruptcy filing, and whether the Depository Trust Clearing Corporation — which processed trades for MF Global in its final days — “should have been aware that it received customer funds.”

In all, roughly $3.9 billion from accounts frozen when MF Global entered bankruptcy has been returned to customers. For the firm’s U.S. customers, that translates to a recovery of about 72 cents for every $1 dollar they had with MF Global. 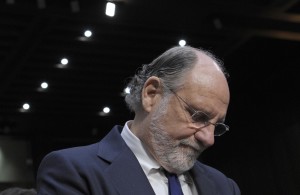