Laurencin attended Miramar High School in Florida, and died after preseason drills. According to his autopsy, he had sickle cell trait anemia, which can make someone more susceptible to heatstroke. There was also evidence he had hypertension and asthma.

Searcy, who attended Fitzgerald High School in Georgia, collapsed while attending a summer football camp run by the school. He had been practicing three times a day, and despite passing out on Aug. 1, returned to practice the next day. He died on Aug. 2.

“There should never, ever be a person die from exertional heatstroke because it’s 100 percent survivable,” Dr. Doug Casa told FRONTLINE in 2010 for our film Football High. Casa is the director of the Korey Stringer Institute, named for the Minnesota Vikings’ offensive lineman who died of heatstroke in 2001. “The key to surviving an exertional heat stroke is what you do in the first five to 10 minutes,” he explains. “How many minutes are you above this critical threshold for cell damage will impact if the athlete lives or dies.”

Over the past 20 years, 40 high school football players have died after suffering heatstroke, according to the National Center for Catastrophic Sport Injury Research. Following Searcy’s death, Georgia implemented new rules addressing heat stroke — which include limits on how many times a day, and how many days in a row teams can practice, to better acclimate athletes to high temperatures. But Florida still leaves decisions up to individual parents and players. Both schools being sued declined to give a comment to the Times, citing the ongoing litigation.

In Football High, FRONTLINE profiled two high school football players in Arkansas who suffered from heatstroke. One, 16-year-old Tyler Davenport, died. The other, Will James, survived, largely due to what happened during those critical five to 10 minutes Casa describes. Watch their stories, and read more about heatstroke and how you can prevent it.

“Please Don’t Let This Happen to Someone Else’s Son”

In an moving letter, the parents of Tyler Davenport, tell their son’s story to FRONTLINE. “We told Tyler that if he was too tired to fight any longer that it was okay. We told him we were so proud of him for fighting as long as he could. We asked him if he was tired would he squeeze our hands. He did. On the early morning of October 12th, Tyler lost his battle with heatstroke, but became a true warrior in our eyes.” 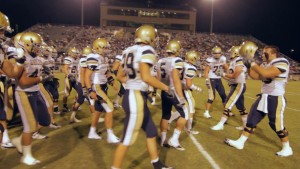