by
Steve Fainaru
Mark Fainaru-Wada
ESPN reporters Mark Fainaru-Wada and Steve Fainaru are writing a book about football and brain injuries, to be published in 2013 by Crown Books, a division of Random House, and FRONTLINE is producing a documentary based on the reporters’ research. This article was produced as part of a collaboration with ESPN. League of Denial airs Oct. 8 on FRONTLINE.

Researchers who conducted the pilot study at UCLA described the findings as a significant step toward being able to diagnose the disease known as Chronic Traumatic Encephalopathy, or CTE, in living patients.

“I’ve been saying that identifying CTE in a living person is the Holy Grail for this disease and for us to be able make advances in treatment,” said Dr. Julian Bailes, co-director of NorthShore Neurological Institute in Evanston, Ill., and one of the study’s co-authors. “It’s not definitive and there’s a lot we still need to discover to help these people, but it’s very compelling. It’s a new discovery.”

Dozens of former players — including 34 who played in the NFL — have been diagnosed with CTE, a neurodegenerative disease linked to dementia, memory loss and depression. The disease, which researchers say is triggered by repeated head trauma, can be confirmed only by examining the brain after death. CTE was discovered earlier this month in the brain of former Chargers linebacker Junior Seau, who committed suicide last May by shooting himself in the chest.

CTE is caused by a buildup of tau, an abnormal protein that strangles brain cells. The scan lit up for tau in all five former players, according to the study. The protein was concentrated in areas that control memory, emotions and other functions — a pattern consistent with the distribution of tau in CTE brains that have been studied following autopsy, according to the researchers. 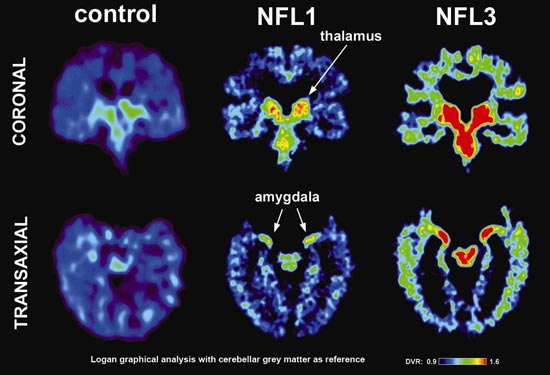 “The findings are preliminary — we only had five players — but if they hold up in future studies, this may be an opportunity to identify CTE before players have symptoms so we can develop preventative treatment,” said Dr. Gary W. Small, the study’s lead author and a professor of psychiatry and biobehavioral sciences at UCLA.

The findings were published Tuesday in the American Journal of Geriatric Psychiatry.

The study could open up new areas for CTE research — and provide additional fuel for the controversy surrounding it. The ability to diagnose CTE in living patients would raise thorny questions about the need for mandatory testing and whether players at all levels can be forced to find out if they are vulnerable to a devastating disease.

The study was funded by a $100,000 grant from the Brain Injury Research Institute, a non-profit organization founded by Bailes, Dr. Bennet Omalu, a pathologist who in 2005 identified the first case of CTE in a former NFL player, and Bob Fitzsimmons, a Wheeling, W.Va., attorney who represented late Steelers center Mike Webster, the first NFL player to be diagnosed with CTE.

Omalu, now chief medical examiner for San Joaquin (Calif.) County, is a co-author on the study.

Dr. Richard Ellenbogen, a Seattle neurosurgeon who serves as co-chair of the NFL’s Head, Neck and Spine Committee, described the study as “promising work,” adding the researchers were “honest about the limitations as well as being excited about the findings.”

“This is the Holy Grail if it works. This is what we’ve been waiting for, but it looks like it’s probably preliminary to say they’ve got it,” said Dr. Robert Cantu, a senior adviser to the NFL’s Head, Neck & Spine Committee and co-director of Boston University’s Center for the Study of Traumatic Encephalopathy. “But if they do have it, this is exactly what we need.”

McNeill, a first-round draft pick in 1974, played 12 seasons in Minnesota and was the subject of a 2011 Outside the Lines story. McNeill had a successful post-football career as a lawyer before being becoming afflicted by early-onset dementia. Now 60, McNeill no longer practices law and is primarily looked after by his family and professional caretakers.

Tia McNeill said Omalu contacted her a year-and-a-half ago to see about her ex-husband, Fred, participating in the UCLA study. She said she was eager to have him included and even worked to recruit other former players.

“When Dr. Omalu first called, because you hear so many stories of people committing suicide and other things, I thought, ‘Wow, if this test that can determine prior to someone’s passing they have it, absolutely, I’m all in,” she said. “And I felt it would be important to tell as many people as I could.”

Bailes, who once worked with the Pittsburgh Steelers, said the ability to make the diagnosis in living patients could provide several treatment options and help prevent the kind of suicides seen in cases like Seau and former Chicago Bears defensive back Dave Duerson. Duerson shot himself in the chest in February 2011, leaving behind a note that directed his brain be donated to research. It was later shown that Duerson suffered from CTE.

Active players who show signs of CTE could use the information to make decisions about when to retire and thus prevent further injury, according to Bailes. He said additional research involving a much larger number of players is needed before that can happen.

Bailes and Small said they have applied for several grants, including one through the National Institutes of Health. In September, the NFL donated $30 million to the NIH for brain injury research.

Another ex-player who took part in the UCLA study was Wayne Clark, a back-up quarterback with San Diego, Cincinnati and Kansas City who started five games during his 5-year career. Clark’s most-active season was 1973, when he started four games for the Chargers while splitting time with Johnny Unitas and Dan Fouts.

Clark, now 65, said in an interview that he was exposed to limited contact and sustained only one major concussion during his career. During a 1972 game at Miami, he was holding on a field-goal attempt that was blocked and was injured while trying to make the tackle.

Film of the play failed to show how the injury occurred, and Clark didn’t remember. “It was a total blackout,” he said.

Clark, who ran a Southern California video services business and officiated high school football games after his playing career ended, said he reacted with “interest, not alarm,” after being told that he had signs of CTE.

“I don’t feel like I’m suffering from any real symptoms at this point, and didn’t have any sense of anything going on except normal age-related issues,” he said. He decided to participate in the hope that “it could help other people and maybe help me.”

* An earlier version of this story identified Dr. Julian Bailes as a Chicago neurosurgeon. He is co-director of the NorthShore Neurological Institute in Evanston, Ill.