The State Attorney General Is Scrutinizing This Assisted Living Facility Over Its Handling of COVID-19. Some Residents Are Suing It, Too.

New York Attorney General Letitia James is looking into allegations that a Queens adult care facility has failed to protect residents from the deadly coronavirus and misled families about its spread, according to two lawmakers who asked for the inquiry and a relative of a resident who spoke to an investigator with the attorney general’s office.

In a separate action Tuesday, three residents of the Queens Adult Care Center sued the facility in federal court over similar allegations.

Both developments were prompted largely by ProPublica’s recent coverage of the facility, which houses both frail elderly residents and those with mental health issues. On April 2, we reported that workers and residents at the home were becoming ill with the coronavirus as residents wandered in and out of the home without any personal protective equipment. Family members later told ProPublica the management said no residents were sick with the virus at the time.

On April 25, ProPublica published a story and a short film with the PBS series Frontline about the harrowing experience of Natasha Roland, who rescued her father in the middle of the night as he suffered coronavirus symptoms so severe he could barely breathe. Roland, in heart-wrenching detail, described how the management of the Queens Adult Care Center repeatedly assured her that her 82-year-old father, Willie Roland, was safe, even as the virus swept through the facility. She said workers were too scared to care for him, forcing his girlfriend, Annetta King-Simpson, to do so. King-Simpson later fell ill herself. Roland and King-Simpson are now suing the facility in federal court.

In an interview, Assemblywoman Catalina Cruz, whose district covers Corona, Elmhurst and Jackson Heights, said she was troubled by what ProPublica reported. She said she hoped the attorney general can determine whether the Queens Adult Care Center had broken any laws.

“It didn’t sit right with me. I thought something was off here. So I said let’s have the experts look at whether there was a crime or a civil violation,” she said. “Folks who live in this adult home deserve the same dignity as everyone else, and if their rights have been violated, someone needs to pay for that.”

Cruz said she had been suspicious of the facility for several years and had come across a community Facebook page where people posted complaints about treatment of residents at the center. When she saw the ProPublica stories, she said she decided to take action, along with City Council member Daniel Dromm, who had already written to the New York State Department of Health and the office of Gov. Andrew Cuomo about the spread of the coronavirus in the facility on several occasions.

“The plight of those living in adult care centers during this crisis was highlighted in a recent article published by ProPublica, which focused on the perils faced by the residents at the Queens Adult Day Care Center,” the lawmakers wrote in their April 27 letter to the attorney general and the governor’s office. “Failure to inform families about the health of loved ones, to lying and covering up deaths have become regular concerns we have received. We are aware that adult care centers are struggling to keep COVID-19 from affecting their residents and we also know that minorities have been disproportionately affected by the virus. It seems to us that management at this particular center have struggled to implement procedures and policies to protect the lives of its residents.”

Cruz said she received an update from the attorney general’s office on May 5, saying it was looking into the matter but would not provide specific details.

Days after the lawmakers sent the letter, Natasha Roland, 35, said she received a phone call from an investigator with the attorney general’s office. Roland said she recapped what she had previously told ProPublica: She began to worry about her father’s safety when nearby Elmhurst Hospital became a viral hot spot, but the management repeatedly told her there were no coronavirus cases in the facility. She said she only found out the truth weeks later when a worker she was friendly with advised her to come and pick up her father because the virus was raging through the facility and aides were becoming too scared to check on residents. In a subsequent interview, that worker denied telling Roland to pick up her dad.

READ: ‘Did I Mess This Up?’ A Father Dying From Coronavirus, a Distraught Daughter and a Midnight Rescue.

A spokesperson for the attorney general would not confirm or deny a specific, active investigation into the Queens Adult Care Center, but said James has received hundreds of complaints related to COVID-19 inside nursing homes and adult care facilities across the state and is investigating many of them.

For its part, the Queens Adult Care Center has denied any wrongdoing and repeated its belief that Roland’s allegations are “baseless.”

“Sadly, select elected officials and ProPublica have been intentionally misled with baseless assertions and utter fabrications crafted by the daughter of one of our long-term residents,” said Hank Sheinkopf, a crisis communications spokesperson hired by the facility. “We have strong reason to believe that this individual is seeking to use her father and other select residents as pawns in an attempt to extort the facility. We are considering our legal options.”

He said the facility has “worked tirelessly” to protect its residents and is unaware of a “potential investigation,” but understood that “the AG’s office has contacted many nursing homes, adult care, and assisted living facilities seeking information. We are glad to be a resource to the AG’s office and have nothing to hide.”

Bruce Schoengood’s 61-year-old brother, Bryan, lives in the facility and shared a room with one of the first residents to become infected with COVID-19 and subsequently die of the disease. Bruce told ProPublica he only learned that his brother’s roommate had died by happenstance during a casual conversation with his brother, and that he has complained for more than a month about a lack of communication from the facility. He said he had not yet heard from anyone with the attorney general’s office but would welcome such a conversation.

In the meantime, Bryan Schoengood, Willie Roland and King-Simpson are suing the facility under the Americans with Disabilities Act. In a 59-page complaint, the group has asked a federal judge to appoint a special master to oversee the facility at the home’s expense to ensure that residents there are safe.

The lawsuit argues that residents have experienced a “gross failure to provide the most basic level of care to safeguard their health and safety in the context of a global health pandemic. People with disabilities are exposed to high risks of contracting the virus with no or few preventative measures in place. Residents who fall sick are left to languish in their room without proper access to medical care.”

The lawsuit claims that because the facility has failed to follow state and federal guidelines, “COVID-19 is rampant in the facility among residents and staff alike.”

In an interview, he said that the facility may not have the resources to properly follow the guidelines, which is why a special master should be assigned to work with a team of outside experts to make sure it can.

“Right now the residents are in a tinderbox,” he said. “And if you drop a match in there, all hell breaks loose. It should be run right. We don’t need dozens of people dying in all our nursing homes and adult care facilities. Some are running better than others and QACC sounds like a place that is not run up to standards.”

He and Bruce Schoengood pointed out that they are not currently suing for damages, but rather to persuade a court to immediately intervene and offer support to the facility’s roughly 350 residents.

Schoengood said the goals of the lawsuit are twofold.

“I think it is both short term and long term,” he said. “Immediate intervention to put proper protocols in place to treat the sick and stop the spread of coronavirus and to communicate with family members. And in the long term I would like to see this facility much better prepared to handle another pandemic or a second wave.”

Responding to the charges in the lawsuit, Sheinkopf again said that “the allegations are baseless and utter fabrications. Queens Adult Care Center (QACC) continues to meet all state issued guidelines.” 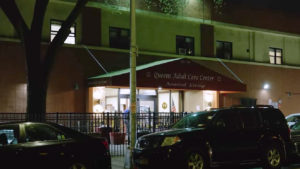