Jeff Soracco of Oxford, Conn. waits to sign up to speak at a hearing of a legislative subcommittee reviewing gun laws at the Legislative Office Building in Hartford, Conn., Monday, Jan. 28, 2013. (AP Photo/Jessica Hill)

The National Shooting Sports Foundation, which represents gun manufacturers, has maintained a relatively low profile in the wake of the Sandy Hook shootings.

But today it waded further into the debate in Connecticut over firearms legislation, releasing a radio advertisement warning that current proposed gun-control legislation would only “punish” law-abiding firearms owners. (Listen to the full ad here.)

We were told we would find common ground to prevent future violence. That’s not what happened. While we await a full police report, political agendas have crept in. Now the general assembly may pass laws that do nothing to make us safer. … Banning firearms and arbitrarily restricting their features? It won’t work.

The ad comes as the governor’s Sandy Hook Advisory Commission, a 16-member panel tasked with studying gun-violence prevention, released its first report (pdf) this week with recommendations on possible legislation.

The report reads like a gun-control advocate’s wish-list: a ban on high-capacity magazines and assault rifles, limits on ammunition purchases, mandatory background checks for all guns sales, registration requirements for every firearm, and permits that can be renewed only after the user proves they can safely handle the weapon and understand current laws.

There appears to be public support for some kind of new gun-control laws. Connecticut voters support most gun-control measures by margins of 2-to-1 or more, according to a Quinnipiac University poll conducted earlier this month. A majority, 54 percent, said the Newtown shooting makes them more likely to support such measures.

But the NSSF wields considerable influence in Connecticut. Before Newtown, the NSSF helped kill two other gun bills — a ban on high-capacity magazines, and another on a micro-stamping process that would help track firearms — by arguing the laws would hurt the state economy.

Since the shooting, the NSSF has made a similar argument, pointing out that major manufacturers such as Mossberg and Sons, and Colt, might leave the state if gun-control laws are passed, taking valuable jobs with them.

Today’s advertisement represents a more public step forward by the NSSF into the general gun-rights cause, which until recently has been defended mainly by local pro-gun groups who have turned out in force at public hearings on proposed reforms.

The fate of new legislation in Connecticut remains unclear. Lawmakers have proposed more than 100 bills since Newtown, all but five of which are gun-control measures. But nothing has gained significant momentum. A bipartisan panel composed of Connecticut senators and representatives has held several hearings but has yet to back any legal measures.

As we reported in our film Newtown Divided, Connecticut historically has been and remains divided on guns. That rift hasn’t healed in the wake of Newtown.

Despite the general support for gun-control among Connecticut voters, only 45 percent of Republicans said they support stricter gun control laws, while 48 percent oppose them. More than half of Republicans also disapprove of the way the governor is handling gun policy, while a majority of Democrats and Independents approve.

There is, however, bipartisan agreement on the state legislature: 54 percent of Connecticut voters believe that their politicians won’t be able to come to any consensus on gun violence. 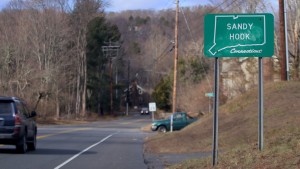