“On Paper, Ebola Should Be Stamped Out”: A Q&A With “Ebola in Congo” Filmmaker Ben C. Solomon

The Democratic Republic of Congo is currently experiencing the second deadliest Ebola outbreak on record. More than 3,350 people have been infected and 2,200 have died.

When Ben C. Solomon, FRONTLINE’s filmmaker-in-residence, went to North Kivu province to document the outbreak, he was drawn to tell the story of the brave health care workers and volunteers battling Ebola in the midst of a war zone.

“What we found were hundreds of health care workers that truly loved their country, and loved their communities and wanted to put an end to this regardless of the history, the conflict and the problems,” Solomon said.

He spoke to FRONTLINE about his experience filming the documentary Ebola in Congo, how being in the midst of the outbreak helped him understand people’s reactions — from mistrust to anger — and why this outbreak has continued despite medical advances since the 2014-2016 epidemic in West Africa.

How did you prepare to make a film about Ebola spreading in a war zone? What were the logistics, the concerns?

From a security standpoint, it was one of the more challenging preparations that I’ve done. Just because it is these two things where one is already a lot to manage, which is conflict, and the other is infectious disease. I have a lot of experience with both conflict and Ebola outbreaks. I covered the outbreak in 2014, and I’ve covered four wars.

This is now the second deadliest Ebola outbreak ever. What did the responders in Congo say about how and why that happened?

Ebola is an epidemic that roots itself in poverty. It roots itself in lack of infrastructure, and lack of education. I’ve seen that already in West Africa from my experiences there. Here, it was the same kind of lack of infrastructure, lack of support, but what was different was that there was all this experience from foreign health organizations that were trying to help there. The WHO had all sorts of new medical practices that they had learned. [An NGO called ALIMA (The Alliance for International Medical Action)] had designed these things called cubes which were standalone rooms, which you could reach in through plastic and help people.

The thing that was most amazing to me, having experienced the outbreak in 2014 and seeing none of this stuff, was how medically they had progressed so intensely and so quickly. But even with all of that, the problem is the infrastructure and the corruption and the systemic problems that had been there long before an outbreak happened. …

You reported extensively from West Africa during the outbreak that’s now known as the deadliest in history – what knowledge were you bringing from covering that one to this one?

The first time I covered Ebola, I was scared. It was a lot more intimidating to work there, because most people — not just reporters but also health care workers and local people getting sick — no one really knew how to deal with it. …It was just this big, scary, intimidating disease that was killing all these people left and right.

Was there anything about this outbreak that caught you off guard?

Ebola causes a lot of fear. An outbreak is unseen, it’s unsaid, and a lot of the time the problem is people just don’t believe it’s real. And that was much more in Congo than in West Africa, because of the lack of trust in the government. This is historically a pretty dissident part of the nation against the central government, so when people were coming in and saying, “Oh, we have to worry about Ebola,” They’re like, “Ebola? We’ve got measles here — measles has killed more people than Ebola this year. We have war. My neighbor has been chopped with a machete just a few weeks ago. What is this thing that’s intangible and that you’re putting all this money into stopping? How does it affect me? All these other things are affecting me just as much.”

That was something that I didn’t understand going into it. I couldn’t understand it from a distance, but once I was there it made total sense. A lot of the protests, a lot of the anger, a lot of the mistrust is stifling, and it’s hard for the [Ebola] response, but it’s also completely understandable in the situation that people have there, which is just decades of a government that has pushed them aside, cast them out, zero support. …

The thing that was the most surprising was the fake news of it. There were a lot of political entities that wanted people to not believe in Ebola. There were a lot of opposition politicians who had, early on, questioned if Ebola was real. That was both horrifying and also really surprising. And that again ties into the complete lack of trust. …

Why did you choose to tell the story through the Ebola responders?

We made a conscious decision to focus on people that are faced with these circumstances. I wanted to be able to understand how — with all of these problems and all this mistrust — people could go into this and keep fighting [Ebola] anyway.

What we found were hundreds of health care workers that truly loved their country, and loved their communities and wanted to put an end to this regardless of the history, the conflict and the problems. I thought that was an inspiring way to understand this part of the world.

When places are so torn by war and torn by conflict, it’s sometimes hard to make these personal connections with people, to understand how people in these situations can make sense of their lives and make sense of the world around them. I wanted to make a film that gave those people a voice and gave them the means to tell their stories, but also helped understand the dynamics of why this was happening — through their experiences and through their lens.

I don’t want people to walk away from this like, “Oh, it’s just a place where there’s lots of war, and lots of disease and that’s just how it is there.” Understanding the context and understanding the people that are trying to fight this is an important way to understand that they have the same wants and hopes as the rest of us, which is safety, good schools for their kids, decent access to health care and food. …

It was so moving to see Jophet — an Ebola survivor who lost his mother, his wife and his son to the disease — taking care of children whose parents had been infected. How did you meet him and hear his story?

When we got there, we were basically just searching for all these different people. …Everybody’s story was so interesting and amazing. But a colleague who’s a UN photographer there just mentioned this guy who had lost his entire family and loves kids. We saw a picture of him and saw his amazing way with kids and immediately said, “Oh yeah, we’ve got to go meet him.”

When we first met him, he seemed really reluctant to talk, he seemed a little reserved, seemed like a quiet guy. But as soon as we started the interview, we could tell that he was full of so much pain and so much character. …To be able to spend time with him was so rewarding.

Did you meet other survivors playing an active role in the response?

[In this outbreak] when survivors got out, they were applied much more as workers. There was much more outreach for them to be brought into the fold, because they were already believers in the disease and could reach out to the communities. Also they were people who were experienced with it and understood the fears and the complications of being in the treatment centers. So, yeah, there was a big community of survivors who were immediately hired, and sometimes volunteered, for this kind of work.

It comes from a really honest and caring place, which is that they really want to help and give people the same chance that they got. It was really inspiring.

There have been some hopeful advances in Ebola vaccines and treatments in recent years. Based on what you saw on the ground, what difference have those advancements made?

…On paper, Ebola should be stamped out. Ebola should not last very long. But it’s really human error that gets in the way… And that’s not just to blame the people of eastern Congo. It happens anywhere. It happens with measles. We have polio outbreaks around the world, and we have a polio vaccine.

This is less about our ability to make the medicine and have these medical advances, and more about our ability to spread them, distribute them, make people believe in them. Ebola as an outbreak now stands to represent our inability to trust, our confusion with medical work. That part of the world is not much different from the anti-vaccine problems you see in this part of the world. The core of it is a similar mentality, which is that people just don’t believe that they’re real. …

Correction: This article was updated to specify the name of the NGO that designed cubes for treating Ebola patients. 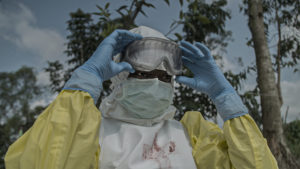