A local resident stands in front of a makeshift memorial honoring George Floyd, at the spot where he was taken into custody, in Minneapolis, Minnesota, U.S., June 1, 2020. REUTERS/Carlos Barria

George Floyd’s death beneath the knee of a police officer has sparked grief and rage in the streets of Minneapolis and across the country.

As I watched all this over the weekend, there was one person I wanted to talk to about it: Jelani Cobb, historian, professor of journalism at Columbia University, New Yorker writer, and one of the most insightful voices on issues of race and policing in America.

That’s the conversation in today’s new episode of our FRONTLINE Dispatch podcast.

Against the backdrop of the COVID-19 outbreak that is disproportionately killing people of color, Jelani helps put this volatile moment in context, explaining why we’ve reached a boiling point, and what he says needs to happen now.

This is how he encapsulates it: “We really need a kind of gigantic systemic overhaul in so much of the country, things that are seemingly unrelated, but from our educational system, our healthcare system, the number of people who didn’t have health care coverage in the midst of a pandemic — all these things that that ultimately culminate in the explosions that we’ve seen in the past week. Until we’re able to address things in a much broader spectrum of ways, we won’t be able to get policing to where it needs to be, either.”

In 2016, Jelani was the correspondent and writer for FRONTLINE’s documentary, Policing the Police, which examined some of the complex issues once again surfacing today, including the role of the federal government in forcing accountability and reform. It is a story we are continuing to follow with Jelani and our other journalists.

I hope you find this conversation as valuable as I do during these difficult times. You can listen to “Race, Police & the Pandemic” on Apple Podcasts, Stitcher, RadioPublic, Google Podcasts or wherever you get your podcasts. You can also stream Policing the Police on our website, on YouTube and on the PBS Video App. 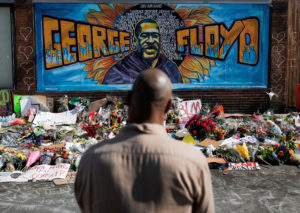