Report: Violence in Syria Amounts to Crimes Against Humanity

They beat with cables and then hanged me by my hands from a pipe under the ceiling so that my feet weren’t touching the floor. I was hanging there for about six hours, although it was hard to tell the time. They were beating me, and pouring water on me, and then using electric tasers.
— A witness describing the torture he says he was subjected to at the Military Intelligence Base in Homs to Human Rights Watch.

Today Human Rights Watch (HRW) released a report detailing abuses — unlawful killings, arbitrary detention, disappearances and torture — it says amount to crimes against humanity committed by Syrian security forces in the restive region of Homs. The group called on the Arab League to suspend Syria’s membership and urged it to support a move by the United Nations Security Council to impose an arms embargo and refer Syria to the International Criminal Court. 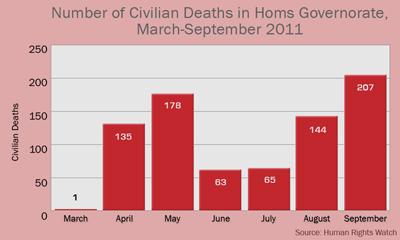 The report asserts most the killings happened in Homs, Syria’s third-largest city, and in the towns of Tal Kalakh, Rastan and Talbiseh during attacks on protesters and funeral processions. Because of media restrictions, it is impossible to confirm the exact death toll.

“Homs is a microcosm of the Syrian government’s brutality,” said Sarah Leah Whitson, Human Rights Watch’s Middle East director, in a statement. “The Arab League needs to tell President Assad that violating their agreement has consequences, and that it now supports Security Council action to end the carnage.”

The revolt in Homs is especially significant because it is increasingly led by an armed opposition made up of Army defectors battling the country’s security forces, “taking on the tone of civil war.” The government claims the violence is being perpetrated by armed gangs and “terrorists,” whom they say have targeted security forces and police officers. Earlier this month, security forces launched a brutal attack to retake Homs.

“Homs is a turning point for now,” an analyst based in Damascus told The New York Times earlier this week. “It’s a successful model of self-defense, if you will, at a time when you really can’t expect people to take any more. They’ve seen too many corpses come back, too many people arrested, disappeared or returned after abominable treatment. It’s too much. And everybody seems to be losing control of the street.”

Analysts warn that Homs could potentially become a hub for sectarian violence if the regime falls. Since the 1970s, the city has been rife with tensions between its majority Sunni population and minority Alawites, who make up a disproportionate percentage of the government.

The Arab League is convening an emergency meeting tomorrow to discuss the Syrian government’s failure to comply with the peace plan it accepted last week.

Bonus: Explore our interactive map to learn how the uprising is playing out in key cities across Syria. Also see how protests and government violence are spread out across Homs in this in-depth map.