Stream “Zero Tolerance” — and Explore 38 Extended Interviews With Our Sources

Now, in the newest installment of the FRONTLINE Transparency Project, you can go even deeper into this important story.

To make the film, Michael and his team conducted more than three dozen on-the-record interviews with former Trump and Obama administration officials, immigration advocates and activists, journalists, scholars and others.

We’ve published 38 of those interviews digitally, for you to explore in-depth — whether it’s Bannon himself describing Trump as an “imperfect instrument”; Stephen Miller’s uncle, David Glosser, criticizing his nephew and explaining how immigrating to America saved the lives of a large proportion of their family; conservative commentator Ann Coulter weighing in on how she feels Trump betrayed his immigration promises; or Sen. Dick Durbin taking you inside the moment when it seemed Trump might be willing to make a deal with Democrats over immigration.

You can use our interactive features to find quotes from the Zero Tolerance film in their original context. You can also discover scores of insights, analysis and stories not included in the final cut — and then share what you’ve found easily on social media through the tools we’ve built.

Both Zero Tolerance itself and these interviews from the making of the film offer remarkable insights into the current politics of immigration in America. Thank you for watching Zero Tolerance, and exploring our journalism surrounding it. 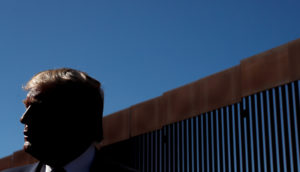