Last month in The Regime, embedded above, we detailed the murder of popular Syrian singer Ibrahim Qashoush. Qashoush’s body was found in a river last July with his vocal cords ripped from his throat.

His crime, it appeared, was recording a blunt and seditious song that became the anthem of anti-regime protestors. Describing it in The New York Times in July, correspondent Anthony Shadid wrote:

[The anthem] is more festive than funny, with an infectious refrain, chanted with the intoxication of doing something forbidden for so long:’Hey Bashar, hey liar. Damn you and your speech, freedom is right at the door. So come on, Bashar, leave.'”

Syrian President Bashar al-Assad, in his first interview with an American journalist since the Syrian crackdown began almost nine months ago, told ABC’s Barbara Walters yesterday that he had never heard of the slain singer.

Walters: A singer, famous singer who wrote a popular song calling for your oust he was found with his throat cut. You have seen these pictures, have you not?

Walters: But in the beginning, what about the singer with his throat cut?

Walters: He was a famous singer, a famous song. You don’t know about it?

Assad: No, I don’t think he’s famous. I don’t know about him.

Walters: You don’t know about him? Well I saw those pictures.

Assad: Famous in the United States, but not in Syria.

Assad also denied that he was behind the crackdown that the U.N. estimates has killed more than 4,000 civilians.

In the face of growing international condemnation from the Arab League, an organization Syria helped found, a bevy of international sanctions, and intense international coverage of Qashoush, both of Assad’s claims are hard to believe.

You can also watch thousands of Syrian protesters chanting the anthem in this video believed to be from the city of Hama, embedded below.

The ABC interview aired the day after what Syrian activists have called one of the deadliest days of the crackdown, reporting dozens of bodies dumped in the city of Homs. 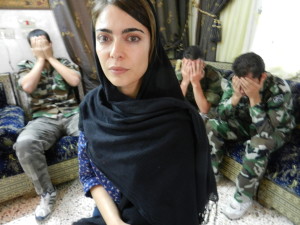