ZDVYZHIVKA, Ukraine — The carnage left by Russian soldiers on the road to Kyiv wasn’t random. It was strategic brutality, perpetrated in areas that were under tight Russian control where military officers — including one of Putin’s top generals accused of war crimes in Syria — were present, an investigation by The Associated Press and FRONTLINE found.

Troops moving down from Belarus toward Kyiv had been ordered to block and destroy “nationalist resistance,” according to the Royal United Services Institute, a London think tank that has reviewed copies of Russia’s battle plans. Soldiers used lists compiled by Russian intelligence and conducted “zachistki” — cleansing operations — sweeping neighborhoods to identify and neutralize anyone who might pose a threat.

The man in charge of this front of the war was Col. Gen. Alexander Chaiko, who earned a global reputation for brutality as leader of Russia’s forces in Syria.

“Those orders were written at Chaiko’s level. So he would have seen them and signed up for them,” said Jack Watling, a senior research fellow at RUSI who shared the battle plans with the AP.

This story is part of an AP/FRONTLINE investigation that includes the War Crimes Watch Ukraine interactive experience and the documentary Putin’s Attack on Ukraine: Documenting War Crimes, on PBS.

While there is nothing necessarily illegal about that order, it was often implemented with flagrant disregard for the laws of war as Russian troops seized territories across Ukraine.

Witnesses and survivors in Bucha, as well as Ozera, Babyntsi and Zdvyzhivka — all areas under Chaiko’s command — told the AP and FRONTLINE that Russian soldiers tortured and killed people on the slightest suspicion they might be helping the Ukrainian military. Sweeps intensified after Russian positions were hit with precision, interviews and video show, and soldiers, in intercepted phone calls obtained by the AP, told their loved ones that they’d been ordered to take a no-mercy approach to suspected informants.

Ukraine has indicted Chaiko for the broad crime of aggression — that is waging an illegal war on their territory. But it will take more specific evidence to land him in international court. Prosecutors would have to show that he played a key role in implementing illegal policies of the Russian Federation or should have known what his troops were doing and was in a position to stop, or punish, their behavior.

For now, Chaiko — a man implicated in some of the worst atrocities in both Syria and Ukraine — is still leading troops, once again as commander of Russia’s forces in Syria.

Here are four takeaways from the investigation:

Mom, I am Killing Civilians

Russian soldiers openly discussed atrocities against civilians during phone calls with their mothers, wives and friends that the Ukrainian government intercepted near Kyiv.

On March 21, a soldier named Vadim told his mother: “We have the order to take phones from everyone and those who resist — in short — to hell with the f——.”

“We have the order: It does not matter whether they’re civilians or not. Kill everyone.”

The slightest movement of a curtain in a window — a possible sign of a spotter or a gunman — justified slamming an apartment block with lethal artillery. Ukrainians who confessed to passing along Russian troop coordinates were summarily executed, including teenagers, soldiers said.

“We have the order not to take prisoners of war but to shoot them all dead directly,” a soldier nicknamed Lyonya said in a March 14 phone call.

“There was a boy, 18 years old, taken prisoner. First, they shot through his leg with a machine gun, then he got his ears cut off. He admitted to everything and was shot dead,” Lyonya told his mom. “We do not take prisoners. Meaning, we don’t leave anyone alive.”

The Dossier Center, a London-based investigative group funded by Russian opposition figure Mikhail Khodorkovsky, verified the identity of the soldiers who made those calls.

In Charge of the Carnage in Bucha

Ukrainian prosecutors say that a unit under Chaiko’s command — the 76th Guards Airborne Assault Division — participated in a lethal cleansing operation on March 4 along Yablunska street, the deadliest road in occupied Bucha and the site of an important Russian command center.

Those units were all under the ultimate command of Chaiko during the early weeks of the invasion, Ukrainian authorities told AP.

Not the Work of Rogue Soldiers

Russians transformed the village of Zdvyzhivka, an hour north of Kyiv, into a major forward operating base for their assault on the capitol. From Mar. 20 to Mar. 31, Chaiko commanded the assault on Kyiv from this village. He was spotted less than a mile down a tightly controlled road around the same time as five men were tortured and killed in the garden of a house frequented by Russian officers. The traffic of tied-up civilians to that house happened more than once, in broad daylight, within the security structures set up by the occupying forces, eyewitnesses said.

There’s no sign Chaiko disapproved of what his troops were doing. Russia’s Ministry of Defense released a video of the general pinning medals on soldiers in Ukraine. “All units, all divisions are acting the way they were taught,” he said in the March 24 video. “They are doing everything right. I am proud of them.”

There is also no sign Moscow has sanctioned Chaiko for the very public atrocities committed on his watch. Instead, Putin praised Chaiko for his actions in Syria, awarding him the title “Hero of Russia” in 2020 and promoting him to colonel general in June 2021. 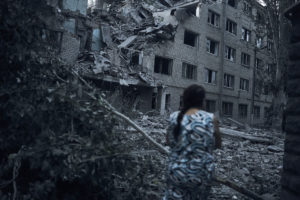