The background check bill that failed last month in the Senate was never seen by gun-control advocates as a perfect victory.

The legislation, introduced by Sens. Joe Manchin (D-Va.) and Pat Toomey (R-Penn.), would have expanded background checks, which are now required for firearms purchases at gun stores, to include sales at gun shows and online.

It also had a huge loophole that still allowed private sales and included none of the bans on high-capacity magazines or certain military-style weapons — proposals that were initially considered by the White House and supported by gun-control groups.

The Toomey-Manchin proposal was a compromise bill that could be seen as a first step towards reforming gun laws. When it failed, President Barack Obama held a rare press conference in the Rose Garden excoriating those who voted against it and blaming the pro-gun lobby for the bill’s failure. “Instead of supporting this compromise, the gun lobby and its allies willfully lied about the bill,” he said.

But while the NRA and its allies were leading a very public battle to quash the bill, members of more moderate groups were helping to write in pro-gun provisions that would ultimately ensure the background-check requirement as the only gun-control provision in the bill.

Now that it’s stalled, the pro-gun moderates are teaming up to ensure that whatever new form the bill takes, it will include far more protections for gun rights than it does provisions for gun control.

Alan Gottlieb takes most of the credit for the pro-gun edits to the first draft. Mustachioed and energetic, the 66-year-old gun collector and his staff helped to write the initial bill with Manchin and Toomey.

Gottlieb is chairman of the Citizens’ Committee for the Right to Keep and Bear Arms, a Washington state-based group that touts itself as the “common sense gun lobby” and claims around 600,000 members.

Gottlieb also tried, unsuccessfully, to persuade his pro-gun colleagues to support it.

“It’s a Christmas tree. We just hung a million ornaments on it,” he said a few days before the vote, touting the bill in a video taken at a dinner in Oregon. “We’re taking the background-check and making it a pro-gun bill.”

Among the “ornaments” Gottlieb highlighted: Veterans couldn’t be denied the right to purchase firearms after being diagnosed with PTSD, and people who already have a handgun permit could buy additional firearms without undergoing another background check.

“What we get back in return for a meaningless background check — which I admit will not solve the problems — we get more rights, and more freedom. To me that’s a win,” Gottlieb said. “I think we snookered the other side, and they haven’t figured it out yet.”

Although it once considered background-checks “reasonable,” the NRA opposed this bill from the beginning.

It decried the legislation as a first step to creating a national gun registry — even though the idea explicitly prohibited by the bill.

Then, it lobbied to kill it. The NRA spent $830,000 in the first quarter of 2013 to influence Congress on gun legislation, according to the latest financial disclosures logged by the Center for Responsive Politics. 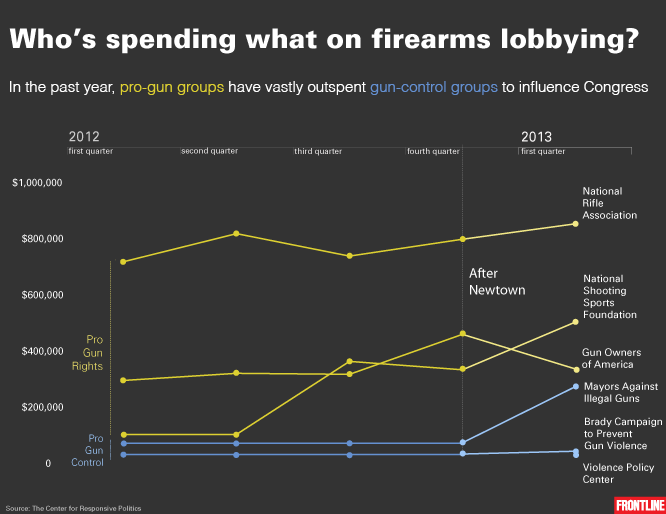 The NRA also had help from the National Shooting Sports Foundation, which represents gun manufacturers and retail companies that sell firearms. The NSSF had been reluctant to take a position on expanding background checks: Retailers could benefit from having the extra business in their stores, but the NSSF also doesn’t want to offend the NRA, its more powerful brother organization.

After telling FRONTLINE in February that it didn’t take a position on expanding background checks to include transfers between individuals, the NSSF came out in strong opposition to the bill, stressing in March on its website that “there is no conflict” between its position and that of the NRA.

The group said that it believes the background-check system should be improved to include more mental health and state criminal records, but it worried that expanding the system to require checks for transfers between individuals would lead to a national gun registry.

The NSSF spent $480,000 on lobbying in the first quarter of 2013, a sharp increase from its quarterly spending last year.

Another, smaller pro-gun group also chipped in. The Gun Owners of America, which prides itself on being more hardline on guns than even the NRA, spent a little over $313,000 this year so far.

Perhaps unsurprisingly, it was the NRA that brought the victory home. Its $830,000 in lobbying expenses so far this year dwarfed what any other group has spent on the issue, pro or con. It wasn’t a big stretch for the NRA, though: That’s about on par with what it spent on lobbying each quarter last year.

At its annual convention, held earlier this month in Houston, Texas, the NRA singled out its top lobbyist, Chris Cox, a boyish Tennessee native, for a standing ovation.

“Did any of you see what happened in the Senate?” asked David Keene, the group’s outgoing president, at the convention’s “Freedom Forum,” a three-hour rally packed with back-to-back speakers that started with the Pledge of Allegiance and ended with a speech by former Gov. Sarah Palin.

“You have Chris Cox to thank for a lot of that,” Keene said.

But most of the convention focused on the next round, what Keene called the “biggest battle for gun rights in our lifetime.” Up next: the 2014 midterm elections, and any potential new gun laws — including a reincarnated background-check bill.

At least one of the two senators who sponsored the bill the first time hopes to introduce a revamped version.

“It’s coming back,” Manchin said recently. “I have never seen something that resonated with so many people in so many parts of society because it made so much sense. … When something makes that much sense, you have facts to back you up, and you just have to walk out into your community and explain it.”

His colleague Pat Toomey (R-Penn.) is more pessimistic, saying that the bill was killed because of the polarized political climate. He’s said he wouldn’t be part of a second attempt at a bill. His office didn’t respond to a request for comment for this story.

But Manchin said in that interview that it might be possible to make some tweaks to the bill to address gun owners’ concerns about a gun registry. While the previous bill banned a national registry, gun-rights groups say penalties for misusing the background-check records or attempting to create a registry could be strengthened.

Both sides are braced for another fight.

Mayors Against Illegal Guns, the largest gun-control lobby, has been holding events in more than a dozen states to challenge the senators that voted against the bill. It also paid for a six-figure ad buy to thank Toomey for his efforts.

The NRA, on the other hand, announced a $25,000 advertising buy to shore up support for Sen. Kelly Ayotte (R-NH), who voted against the bill and has since seen her support drop by 11 points.

Meanwhile, the pro-gun moderates see a new opportunity in the dead background-check bill: They want to turn a revived bill into one that further expands rights for gun owners.

Gottlieb didn’t respond to a request for comment from FRONTLINE. But a close colleague at the Second Amendment Foundation, Joe Tartaro, said that Gottlieb would also be involved with any new iteration of the bill.

Feldman is now president of the Independent Firearms Owners Association, a group that supports the Second Amendment, but also “a rational dialogue leading to practical solutions.” He supported the initial bill, and reached out to both senators after it failed.

“There are lots of little fixes that will make it a better bill,” Feldman said. The key is to consider “what changes could be in the bill that could provide political coverage for those that voted against it to vote for it.”

Feldman has suggested a federal concealed carry amendment that he thinks could help the bill pass the House of Representatives, and an updated pass-through provision that would allow people to transport military-style weapons and high-capacity magazines across state lines.

Manchin’s communications director, Jon Kott, said that the senator had talked with the pro-gun groups, but “not in any extensive way,” he said. “People have had suggestions, but not to any great degree.” For now, he said, Manchin was engaged in “closed-door negotiations” with his colleagues.

Mark Glaze, the director of Mayors Against Illegal Guns, welcomed the pro-gun moderates’ involvement, saying it helps make the case for the background-check bill, and could make the legislation more likely to pass in Congress.

“Our views have always been where the public is,” he said. “The majority believe you have a right to have a gun in your home for self-defense, and more believe in doing everything you can to keep from guns falling into the wrong hands.”

“The fact that some gun-rights lawyers happen to feel the same way does nothing but encourage us.”

*[Editor’s note: An earlier version of this article incorrectly stated that Feldman had compromised with Clinton on the 1994 assault-weapons ban, which he in fact opposed.]