Trump Wants a Wisconsin Recount. If You Need a Refresher, Here’s How Recounts Work.

The FRONTLINE documentary "Whose Vote Counts" examined voting rights and voter suppression through the lens of Wisconsin's April 2020 primary. The state remains under the national microscope, with Trump’s call for a Wisconsin recount in the general election.

November 6, 2020, update: Georgia’s secretary of state indicated this morning that a recount there is a possibility. “With a margin that small, there will be a recount in Georgia,” Brad Raffensperger said in a press conference, emphasizing that the state’s final results are still too close to call. Those results must be confirmed before a recount could begin, according to Georgia law.

As election officials continue to count votes in the 2020 presidential election, already the most litigated in recent U.S. history, the Trump campaign said today it would seek a vote recount in Wisconsin.

President Trump’s call for a recount comes hours after his incorrect declaration of victory around 3 a.m. on November 4, when millions of votes had not yet been tallied — including in key battleground states, Wisconsin among them. Trump also hinted at pursuing legal action, saying, “We want all voting to stop.” At the time of Trump’s comments, polls had been closed for hours, although ballot counting was still underway.

States have varied timetables for vote counting, but many didn’t begin until after polls closed, with counting likely to continue for days. Of the record-breaking 100 million early votes cast, 37 million were mail-in ballots, which require manual counting. The Republican Party and the Trump campaign have sought to block the counting of mail-in ballots that were postmarked before Election Day but arrived after, or even on, Election Day.

In Wisconsin — a state FRONTLINE followed closely in the recent documentary Whose Vote Counts — election officials began counting absentee ballots after the polls opened at 8 a.m. on Election Day.

Biden has assembled a team of lawyers to tackle state-by-state collecting and counting issues, as needed. President Trump has repeatedly indicated he might not accept the results of the election if he loses. In response to the call for a recount, the Wisconsin Elections Commission says it is not aware of any irregularities.

As vote tallying continues, here’s a refresher on how recounts work.

Are All State Recounts the Same?

No. There are two types of ballot recounts for general elections: an automatic recount and a requested recount. Some states allow one or both.

A narrow margin triggers an automatic recount in the District of Columbia and 21 states, including Florida (0.5% voting margin), Pennsylvania (0.5% or less), and Ohio (0.5% for a presidential election), according to the National Conference of State Legislatures. Machine glitches or discrepancies in voting totals may also trigger a recount in certain states.

Forty-three states and the District of Columbia allow candidates, voters, and election officials — depending on the state — to request a recount under certain conditions. Some states, such as Wisconsin and Iowa, allow a losing candidate, a voter, or a party official to request a recount. Florida, while allowing for an automatic recount, does not allow requested recounts.

In Wisconsin, which does not provide automatic recounts, a recount request must be filed within three business days after the state announces its certified results.

In an election with more than 4,000 votes, a candidate can request a recount in Wisconsin only if they trail by no more than 1% of the total votes cast, according to the Wisconsin state legislature as of 2017. That’s currently the case in Wisconsin, where Trump trails by roughly 0.6%, pending the final certified tally.

No. Just think about Florida in 2000. But there are some guidelines mandated by the U.S. Elections Assistance Commission. Machines must be tested for accuracy, and counting teams — which must include at least two members, typically with representatives from each major political party — must be appointed; EAC does not specify who makes those appointments. Finally, the party responsible for recounting — depending on the state, this could be election officials, a recount or canvass commission, the secretary of state, or a court — must set rules for how candidates and individuals can observe the recount.

Recounts can either be retabulated by machines or manually, largely depending on state laws and how the ballots were originally cast.

Recounts can occur only after a state-certified vote count is released, explained John Fortier, the director of governmental studies at the Bipartisan Policy Center, a D.C.-based think tank.

“Everything that is said on election night is unofficial. The official certification is a real process that the government in charge of the elections will put a stamp on and say, ‘Here it is,’” Fortier told FRONTLINE. “Different states do that at different speeds; some are days, some are weeks.”

As of November 4, Wisconsin’s final tally is still to be determined, although with 98% of the state’s votes counted, Biden is the projected winner.

How Long Do Recounts Take?

Each state sets its own deadlines to initiate recounts, which means the duration of a recount can vary based on how many votes will be recounted, and whether the recount is automatic or requested.

Litigation and disputes can delay both initial counts and recounts, according to Mark Halvorson, the founder of Citizens for Election Integrity Minnesota, a nonpartisan nonprofit that advocates for nationwide election transparency and sometimes conducts election audits.

A recount could finish within weeks — but litigation could last far longer, Halvorson told FRONTLINE.

That said, presidential races are supposed to resolve relatively quickly, per federal and constitutional deadlines. According to the Electoral Count Act, there are two key benchmark dates.

The “safe harbor deadline” provides that a state can use procedures in place prior to Election Day to settle election controversy no later than six days before the elector’s meeting, or 35 days after the election — in 2020, that would be December 8. The second deadline is when the Electoral College votes, the Monday after the second Wednesday of December in a presidential year — this year, that’s December 14.

Should a state miss the December 14 deadline, the state legislature picks its own electors to select the presidential win for that state. Under the 14th Amendment, if neither candidate has a majority of electoral votes, Congress will select the next president by January 6.

Can Recounts Be Contested?

Kind of. Cases filed in state and federal courts could make their way to the Supreme Court, such as in the 2000 election between former Vice President Al Gore and future President George W. Bush.

But contesting lawfully cast ballots has no legal ground, said Danielle Lang, co-director of Voting Rights and Redistricting at the Campaign Legal Center, a legal nonprofit specializing in election law. Still days away from the full count of all votes, Lang said that, while it is typical for candidates to have an arsenal of lawyers, courts won’t decide this election just because a candidate requests it.

“We don’t allow politicians to pick their voters,” Lang said. “Recounts are a familiar process, and they happen all the time. Overwhelmingly, recounts just confirm the results of the original count.”

Litigation following an election is typical, Lang said, but voters shouldn’t worry about whether their votes will get counted once their ballots have been cast and accepted. Instead, Lang urges voters to wait for the final vote count.

“It’s important to remember that language about flipping results is just wrong,” she said.

This article has been updated to include a link to a companion story.

For more on voting rights, voter suppression and election integrity in Wisconsin, watch Whose Vote Counts, a documentary from FRONTLINE, Columbia Journalism Investigations, Columbia Journalism School and USA TODAY NETWORK reporters. Whose Vote Counts premiered Tues., Oct. 20, 2020, on PBS stations and is now available to stream in FRONTLINE’s online collection of streaming films, on YouTube, in the PBS Video App and below: 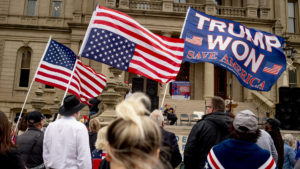