A picture taken on October 20, 2017, shows heavily damaged buildings in Raqqa, after it was retaken from ISIS. An Amnesty report says the U.S.-led coalition fired imprecise explosive weapons in areas populated with civilians during the offensive to retake Raqqa last year. (BULENT KILIC/AFP/Getty Images)

The U.S.-led coalition that bombarded the Islamic State in Iraq and Syria from Aug. 2014 onward has consistently maintained that it worked diligently to avoid civilian casualties. A former coalition commander, Lt. Gen. Stephen Townsend, wrote last September, “I challenge anyone to find a more precise air campaign in the history of warfare.”

But a new report from Amnesty International says the coalition fired imprecise explosive weapons in areas populated with civilians during its offensive in Raqqa, which began in June 2017 and ended in October, with the fall of the Islamic State’s de facto capital. From the beginning, Amnesty said, the coalition neglected to address concerns about civilian casualties, and failed in a number of cases to take all possible precautions to make sure civilians were not harmed.

The report, published today, June 5, documents coalition airstrikes that killed several members of four families in Raqqa. During the offensive to take the city, the Aswad, Hashish, Badran and Fayad families found themselves trapped between ISIS snipers and IEDs on one side, and coalition artillery and airstrikes on the other.

Ultimately, coalition bombs killed between eight and 30 members of each of the four families, according to Amnesty’s research. Its report was based on visits to 42 locations of strikes in Raqqa in Feb. 2018, 112 interviews conducted with witnesses and survivors, and analysis of satellite imagery and other publicly available material.

“The coalition’s claims that its precision air campaign allowed it to bomb [ISIS] out of Raqqa while causing very few civilian casualties do not stand up to scrutiny,” Donatella Rovera, senior crisis response adviser at Amnesty International said in a statement. “What leveled the city and killed and injured so many civilians was the U.S.-led coalition’s repeated use of explosive weapons in populated areas where they knew civilians were trapped.”

In a statement to FRONTLINE, the coalition’s public affairs office said the coalition “applies rigorous standards to our targeting process and take[s] extraordinary efforts to protect non-combatants,” adding: “We continue to conduct our strikes in a manner that minimizes their impact on civilian populations and infrastructures and commit to transparency in reporting when civilian casualties unintentionally occur as a result of our strikes.”

On Twitter, a spokesperson for the coalition, U.S. Army Col. Sean Ryan, strongly disputed the report, saying that Amnesty “didn’t thoroughly research things we said” and “failed to check the public record & get facts straight.”

But, he also said that the coalition is willing to reassess cases if Amnesty’s information is new and compelling.

In its monthly civilian casualty report released on May 31, CJTF-OIR said that at least 892 civilians had been unintentionally killed by coalition strikes since the operation to defeat ISIS began in Aug. 2014, although the figure did not distinguish how many of those deaths happened in Syria and how many in Iraq.

Airwars, a U.K.-based group that monitors civilian casualties, estimates that the civilian death toll from coalition air and artillery strikes in Syria during the same time frame is far higher — between 3,600 and 5,600 people. The Amnesty report does not offer a precise tally for the Raqqa offensive.

In the cases Amnesty documented, it found that some strikes appeared likely to cause excessive civilian harm, or didn’t distinguish between military targets and civilians, which would be a potential violation of international human law.

As the battle approached, the Aswad family — which lived on the outskirts of Raqqa — sent their female relatives and children to Manbij, a city that was no longer under ISIS control, Amnesty said. The family’s older brothers decided to stay to protect their business and the building they’d spent their life savings to construct. The remaining members of the Aswad family and neighbors took shelter in the building’s basement as ISIS and the U.S.-backed Syrian Democratic Forces, predominantly made up of Kurds, fought around them. On June 28, 2017, a coalition airstrike destroyed the four-story building where they were sheltering.

“We were sure that the warplane would have photographed our street and would know our movements,” Mohammed, one of the brothers who survived the strike, told Amnesty. After the strike, he could hear survivors crying out from the wreckage, but had no means of getting to them. He told Amnesty he asked ISIS for help, but they called him an apostate. He went to the SDF, and they accused him of being ISIS and held him for two days. The strike reportedly killed eight people, including five children, eight to 17 years of age.

In another case highlighted by Amnesty, 39 members of the Badran family and several neighbors were killed in strikes that hit the places where they sought shelter. One of the survivors, Rasha Badran, told Amnesty that they didn’t flee at first because they didn’t think the situation would get that bad. “We were naïve,” she said. “By the time we realized how dangerous it had become everywhere, it was too late; we were trapped.”

She said they fled their house after artillery shells hit the street outside their building. They sought refuge in another building, which was also hit. They fled again, but ISIS began rounding up civilians and forcing them into certain neighborhoods. When the family decided to flee in July, one of the cars they were using was hit, killing four family members. Another strike hit a house they had been staying in, killing five more. The surviving members of the Badran family continued to flee from place to place in search of medical care, food and water. ISIS fighters opened fire on them when they tried to escape in mid-August. Two days later, the houses they were staying in were hit by coalition airstrikes.

“Both houses were pulverized; nothing was left standing, there was only rubble,” said Rasha, whose one-year-old daughter was killed in the strike along with 27 other relatives. “I don’t understand why they bombed us,” she said. “Didn’t the surveillance planes see that we were civilian families?” 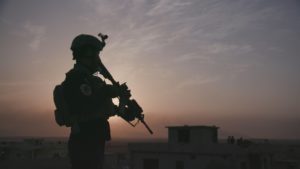 Other Articles From Terrorism