Top Photo: Anti-abortion protester Eleanor McCullen, of Boston was the lead plaintiff in the challenge to the buffer zones outside clinics that provide abortions. (AP Photo/Steven Senne)

Today’s unanimous Supreme Court decision to overturn a Massachusetts law allowing a 35-foot buffer zone around abortion clinics marks a victory for the pro-life movement, which argued that protesters have a right to approach and try to counsel women who might be seeking an abortion.

The court found the law violated First Amendment protections by prohibiting speech on public streets. Although the court said it would allow states to pass laws ensuring access to reproductive health facilities, today’s ruling rolled back protections put in place after several years of clashes at clinics in Massachusetts, where pro-life protesters attacked and even killed people who worked there.

In 1996, FRONTLINE took an in-depth look at one case that helped lead to the buffer zone law. Two years earlier, John Salvi, a radical young Catholic abortion opponent, opened fire on two clinics in Brookline, Mass., just outside Boston, and killed two women: Shannon Lowney, a 25-year-old receptionist at Planned Parenthood, and Lee Ann Nichols, who worked as a receptionist at PreTerm, the clinic down the street.

The killings ignited a fierce debate about the intersection of free speech, abortion and religion. For the first time, Murder on Abortion Row is streaming online. Watch it below.

The film was described in The New York Times as “a remarkable, heart-wrenching film” and by Tom Feran in the Cleveland Plain Dealer as “a complex and fascinating story whose tight focus provides a unique window on the bitter divisiveness of the abortion debate.”

And Alex Strachan wrote in The Vancouver Sun:

Murder on Abortion Row is the classic example of documentary journalism at its best, telling us the story of three seemingly ordinary people, reflecting their passions and dreams, while revealing, piece by piece, the arguments and themes behind one of the most divisive issues of the day. 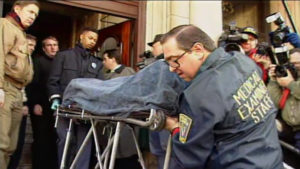 Other Articles From Social Issues

Why a U.S.-Taliban Peace Deal Could Strengthen ISIS in Afghanistan

Weinstein Convicted of Rape and Criminal Sexual Act; Acquitted on Other Charges