‘We Have Families Watering Down Soup’: Inside One City America Has Left Behind

An abandoned factory behind a barbwire fence in Dayton, Ohio in July 2016. (Ty Wright for ProPublica)

What happens when a boomtown goes bust? Companies bolt and people with them, leaving behind rising poverty and food insecurity — even for those that have jobs.

In the new documentary Left Behind America, FRONTLINE and ProPublica explore how cities like Dayton, which populate the vast span of the U.S. between coastal hubs like Wall Street and Silicon Valley, have transformed from lively, prosperous capitals into ghost towns.

In Dayton, as correspondent Alec MacGillis discovers, it has reached the point that almost half of its residents have no access to a nearby grocery store. And last year, people lined up for free groceries at a local food pantry, St. Vincent de Paul, over 31,000 times.

“All I’ve seen is the need increase, increase and increase,” Krys Davidson, who works in community enterprises for the organization, says in the below clip from the film.

That’s despite the fact that most of the people in line have jobs.

It is proof that although Dayton’s unemployment has bounced back, people are still having a hard time paying the bills and putting food on the table. Taylor Hardy, a mother of two working full-time as a nursing assistant and supplementing her wages with food stamps, still looks to St. Vincent and others for help stocking the cabinets. She and her boyfriend, Andrew, who weatherizes homes, make around $13 per hour. They say they make about $2,300 a month, which would put them just over the poverty line for a family of four.

“I think I have $5 in my bank account right now,” Hardy says. “It’s sad, it’s really sad, that I work all those hours and I miss the time with my kids and my family to make nothing.”

Sunnie Lain sees many more like her coming into St. Vincent.

“I cannot overstate the change that happened in 2008 and from there on, it was a game-changer for us. People who have never needed help came to us and they continue to,” she says. “Jobs have come back, but it’s not the kind of jobs we lost. People who were making a good middle-class income are now making $10 or $12 an hour … People did everything they were supposed to do, and it didn’t work.”

These families are now struggling for survival, isolated from the capitals of America’s industry and devastated by the impact of economic turmoil.

“People who are coming are people who will probably never recover from the great recession,” Lain says. “We have families watering down soup, and moms trying to figure out how to make a box of mac and cheese last for two days. We visit homes with no food in the cupboard at all. There is nothing.”

For nearly the last century, Americans have become accustomed to life getting better from one generation to the next. That dream has broken down in places like Dayton. For more on what happens in the aftermath of that collapse, when the economic engines driving once-bustling cities stall, watch Left Behind America. The latest from director Shimon Dotan, the film was produced in partnership with ProPublica and “Chasing the Dream,” a multi-platform public media reporting initiative from WNET in New York. 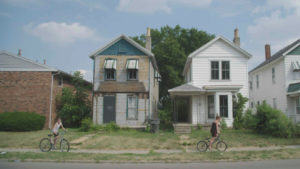