Above, a still from the July 2021 FRONTLINE documentary "Leaving Afghanistan." Amid the U.S. withdrawal, Taliban leaders claim Iran is mobilizing its proxy militia the Fatemiyoun for civil war within Afghanistan.

With the United States on track to pull all troops out of Afghanistan by August 31, Afghans and foreign powers are increasingly fearful the country will descend into civil war.

As peace talks with the Afghan government stagnate, the Taliban says it has secured control over approximately 80% of the country, surrounding most major cities.

In the new FRONTLINE report Leaving Afghanistan, correspondent Najibullah Quraishi investigated how Afghanistan’s neighbors — particularly Iran, through its proxy militia, the Fatemiyoun — are looking to fill the void as America withdraws.

Quraishi spoke to Taliban leaders and former fighters who claimed Iran is mobilizing the Shia Fatemiyoun within Afghanistan. In return, a Sunni Taliban leader told Quraishi he would target and kill Afghanistan’s Shia minority, accusing them of harboring Fatemiyoun fighters.

Here’s a closer look at who the Fatemiyoun are and why they make the Taliban nervous.

The Iranian-backed Fatemiyoun Brigade is drawn from Shia Afghan refugees in Iran and also from members of the Hazara Shia minority inside Afghanistan. Hazaras currently make up 9 to 10% of Afghanistan’s total population of 38 million. Considered infidels by the Sunni Taliban and the target of deadly attacks since the 1990s, hundreds of thousands of Hazaras have fled to Iran, where the government has recruited them to the militia.

Fatemiyoun members are “mostly in their 20s and 30s … motivated mainly by economic deprivation and vulnerabilities due to their migrant status,” per the United States Institute of Peace (USIP). According to media and human rights reports, Iran offered these refugees and their families payment, citizenship and other legal protections in return for serving in the brigade, although some refugees “report[ed] being coerced into joining with threats of arrest and deportation,” according to a report from the Middle East Institute. Iran is also known to have armed Fatemiyoun fighters in Yemen and Syria.

Estimates put the number of Fatemiyoun troops Iran deployed to Syria, to fight ISIS on behalf of President Bashar al-Assad, as high as 20,000 or even 50,000. In Leaving Afghanistan, sources told FRONTLINE that Iran is now sending Fatemiyoun back to Afghanistan, with thousands already in the country.

The Afghan government has not explicitly outlawed the Fatemiyoun and has made few public comments about the militia’s presence. Instead, Rahmatullah Nabil, the head of Afghanistan’s intelligence agency from 2010 to 2012 and 2013 to 2015, told Radio Free Europe in February 2020 the Fatemiyoun didn’t pose an “immediate threat to Afghan national security,” saying several thousand had returned.

USIP estimates the total number of Fatemiyoun fighters between 30,000 and 60,000.

Why did the U.S. designate the Fatemiyoun a terrorist organization?

In 2019, the U.S. Treasury Department designated the Fatemiyoun in Syria a terrorist organization “for providing material support” to Iran’s Revolutionary Guard, alongside other groups that assisted Iran in Syria.

“The brutal Iranian regime exploits refugee communities in Iran, deprives them of access to basic services, such as education, and uses them as human shields for the Syrian conflict,” said Treasury Secretary Steven Mnuchin at the time of the designation.

When FRONTLINE asked the U.S. State Department about its current position on Iran’s involvement in Afghanistan and the Fatemiyoun, a spokesperson responded: “Iran directs, trains, supplies and funds militia groups across the region to advance its interests, threaten U.S. partners and undermine regional stability.”

According to the spokesperson, “As President Biden said, the United States will reorganize our counterterrorism capabilities and substantial assets to prevent reemergence of terrorist threats, in Afghanistan or anywhere else.”

In a December 2020 interview with TOLO TV, a prominent Afghan television station, Iran’s foreign minister, Javad Zarif, refused to claim leadership over the Fatemiyoun in Syria but said they had begun to leave the country. “Maybe they are in Iran, or perhaps they are not in Iran,” he said, signaling they might already be in Afghanistan.

In the interview, Zarif said that if the Afghan government was “willing,” it could take control of the Fatemiyoun within Afghanistan, to “fight against Daesh [ISIS] and for the fight against terrorism and for the protection of Afghanistan security.”

Why does the Taliban fear the Fatemiyoun’s presence in Afghanistan?

The Taliban has had a historically hostile relationship with Iran and views the Fatemiyoun as Iran’s proxy. At the same time, the Hazaras and other ethnic groups in Afghanistan have begun taking up arms and forming militias.

Ibraheem Bahiss, a consultant with the International Crisis Group who analyzes peace and conflict developments in Afghanistan, told FRONTLINE the Hazaras have been the targets of many aggressors, including the Taliban and ISIS in Afghanistan, with little protection from the Afghan government.

“This makes the potential for a Hazara resistance against the Taliban that much more likely, in comparison to other groups,” Bahiss said.

According to Bahiss, while most Fatemiyoun are recruited from Afghan Shia refugees living in Iran, and most commanders have spent years in Iran, the majority of Fatemiyoun commanders and fighters appear to be ethnically Hazara.

“The fact that the Fatemiyoun are experienced veterans of the Syrian conflict and also have strong connections in the Iranian establishment make the potential of a Fatemiyoun-led Hazara resistance not only more likely but also more threatening,” Bahiss told FRONTLINE.

Iran has not publicly announced a policy toward the Fatemiyoun forces in Afghanistan, beyond Zarif’s statement on TOLO TV. And while reports from The Washington Post and Atlantic Council show Iran appearing to ease its stance toward the Taliban, Bahiss told FRONTLINE Iran has been agitated by the Taliban’s territorial gains in Afghanistan.

Meanwhile, the Taliban has not sought to establish ties with the Fatemiyoun.

“Inside Afghanistan, all the Hazaras are Fatemiyoun. I will kill Fatemiyoun and all others who are key players in the civil war in Afghanistan. I will kill thousands of Hazaras,” said the late Mullah Abdul Manan Niazi, one of the Taliban’s original leaders who was killed by an unknown assassin just over two weeks after FRONTLINE interviewed him for Leaving Afghanistan.

“Let it be a lesson in their history and to future generations,” Niazi said.

Watch Leaving Afghanistan, in full, below. 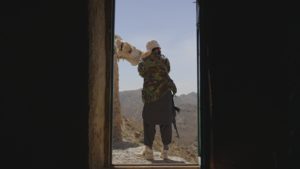