When you throw away a plastic container, how do you decide whether to toss it in the trash or into a recycling bin? If you find the choice puzzling, you’re not alone. A 2014 poll found that 65 percent of consumers didn’t understand which plastics could be recycled. Drawing from interviews with recycling and waste management experts, FRONTLINE found the answer to that and other key questions below.

Is Recycling Always a Good Thing?

For many materials, recycling is cost-effective and good for the environment. Take aluminum, which can be recycled indefinitely using 95 percent less energy than it takes to produce new aluminum. For paper, the benefit is clear: one ton of recycled newsprint saves about 15 trees and 7,000 gallons of water, according to estimates from the Environmental Protection Agency.

Recycling plastic conserves the fossil fuel — natural gas or oil — used to manufacture it. But plastics are usually “downcycled” into lower-quality and lower-value products, such as carpet fiber or car parts. And while it’s true that virtually any plastic can technically be recycled, that doesn’t mean it actually will be.

How Much Is Actually Recycled?

Despite the benefits of recycling, the U.S. recycling rate lags behind other developed countries. Overall, only about a quarter of waste is recycled, according to the EPA, and just 60 percent of communities in the country have access to curbside recycling pick-up.

Some materials are recycled at relatively high levels: more than two-thirds of paper and about a third of aluminum. But for plastic, the rate is just eight percent. Another 16 percent is incinerated. The vast majority of plastic — that remaining 76 percent — ends up in landfills.

So What Plastic Can be Recycled?

There’s a lot of reasons so little plastic is recycled. One major challenge today is that recycling plastic has steep competition from new plastic, which is cheaper due to the abundance of low-cost shale gas used to make it.

Another problem: before existing plastic can be recycled, it has to be sorted by type.  The plastics industry created a code designating seven kinds of plastic, denoted by the numbers within the triangular “chasing arrows” logo on the bottom of most packaging. Only two types are regularly turned into new products:

There are growing efforts to drop the “chasing arrows” logo, which has long been criticized for confusing customers who assume it means a product is recyclable. One industry-backed initiative is now encouraging companies to put new, clearer recycling labels on their packaging, while some local recycling programs ask residents to ignore the symbol and numbers altogether.

What Happens to the Plastic I Put in the Recycling Bin?

Recycling in the U.S. is governed by a patchwork of local rules — and more often than not, handled by private companies who recycle for a profit. So it’s always good to check with the company contracted to recycle in your community about what they can and don’t recycle. Tossing anything in the bin only makes recycling more difficult and expensive.

For people with curbside recycling, trucks haul your household recyclables to a materials recovery facility where machines and workers sort and separate paper, metal, glass and plastic. Most of these sorting companies then sell those recyclables into a global market.

While most plastic bottles and jugs sold for recycling stay in the U.S., other kinds of “mixed plastics” are now usually sent to landfills, even if they end up in recycling bins. For years, Chinese recyclers bought up the mixed plastics, sorting out what they could use. But when China stopped importing foreign plastic waste in 2018, those markets dried up.  A February Greenpeace survey of 367 sorting facilities found only a handful that would still sell mixed plastic.

So, should I only buy recyclable packaging?

Not necessarily. Sometimes, it takes a greater toll on the environment to recycle a product. David Allaway, a senior policy analyst at the Oregon Department of Environmental Quality, is the co-author of a 2019 study that challenges common assumptions that recyclable — or even compostable — materials are always the best choice.

“Often a recyclable packaging format will reduce some environmental impacts but increase others,” a report summary concluded, calling “recyclability” a “poor predictor of environmental benefits.”

Allaway’s study found that non-recyclable packaging like plastic-metal laminate bags, used often for coffee or tuna, have a smaller total impact on the planet than recyclable steel cans holding the same goods. That’s also true of paper bags, which have a bigger overall footprint than plastic ones. However, this analysis assumes that all the packaging is properly disposed of — which critics note isn’t the case in much of the world today.

So what packaging is the best?

There’s no single answer. Packaging is usually only a small part of a product’s environmental footprint. Growing the food itself often has a much bigger effect on the planet because of all the water and resources used to make it.

“You have to find the perfect balance with packaging, which is not too much, but not too little,” Allaway told FRONTLINE. “It’s a little bit like Goldilocks. Too little packaging, and you end up wasting food. That’s a deal breaker, because the impact of growing that food is much more … than the impact of producing the packaging.”

And there’s one choice that experts say is almost always beneficial: using less, and finding ways to reuse what you have. 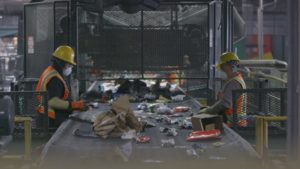