What’s the State of the Church’s Child Abuse Crisis?

The first report that church officials received about Father Shawn Ratigan, compiled by a Kansas City Catholic school principal in May 2010, was troubling.

Ratigan had taken hundreds of photographs of children, Julie Hess, the principal, wrote to church officials. He had tried to interact with kids on Facebook, and sometimes had physical contact with children in ways that appeared to other adults to be “boundary violations.”A pair of girl’s underwear was found in a planter in his backyard.

Parents and staff, Hess said, were “discussing whether he is a child molester.”

Bishop Robert Finn, who had authority over Ratigan, didn’t alert the police then, according to court documents. (Finn would later say he had only received a verbal summary of the letter from a deputy at the time.) He also didn’t call the police several months later, when a computer technician found hundreds of lewd photos of children on Ratigan’s laptop, most of which appeared to have been taken by a personal camera.

Instead, the laptop was turned over to the diocesan lawyer, and Finn called a psychiatrist, who said he thought he could help with Ratigan’s “severe loneliness that has caused this problem.”

In the meantime, as subsequent civil lawsuits would show, Ratigan continued to take photographs of young girls’ genitals.

Ratigan was arrested in May 2011 for possession of child pornography. He pleaded guilty to five counts of producing or attempting to produce child pornography, and was sentenced to 50 years in prison.

Finn, who argued in court that because others in the diocese were tasked with reporting abuse he didn’t have a legal obligation to do so, was convicted in 2012 for failing to report Ratigan to the police, and given two years’ probation.

He is still the bishop of the Kansas City-St. Joseph diocese, in good standing with the Catholic Church.

That, say former priests and victims’ advocates, represents the state of the sexual abuse crisis in the Catholic Church today. More than three decades after the initial reports of abuse began to emerge, critics say that many bishops, who have authority over their areas of responsibility, known as dioceses or eparchies, seem more committed to protecting the church than preventing abuse.

The Vatican defrocked nearly 400 priests from 2011-2012 who abused children, according to Vatican figures. But while several bishops have resigned in connection with sex abuse scandals, of those who ignored offenders’ behavior or even intervened to protect them, a scant few have been otherwise disciplined by the Vatican.

“That’s the crux of the crisis,” said David Clohessy, the national director of Survivors Network of those Abused by Priests, or SNAP, a victims’ advocacy group. If the bishops have impunity, he said, “there’s no incentive for them to reform. It’s not even in their self-interest to reform.”

The Scope of the Crisis

It’s difficult to estimate the full scope of the abuse crisis. While allegations first surfaced in the U.S., the problem has become a global one, with widespread reports of abuse emerging in Ireland, Spain, Germany, Italy, Latin America and elsewhere.

In the U.S. alone, 16,787 people have come forward to say that they were abused by priests as children between 1950 and 2012, according to the U.S. Conference of Catholic Bishops, the organization for the Catholic hierarchy in the country. Those figures are incomplete. The data excludes, for unclear reasons, any people who came forward in 2003.  The conference also counts only allegations it determined were “not implausible” or “credible.” 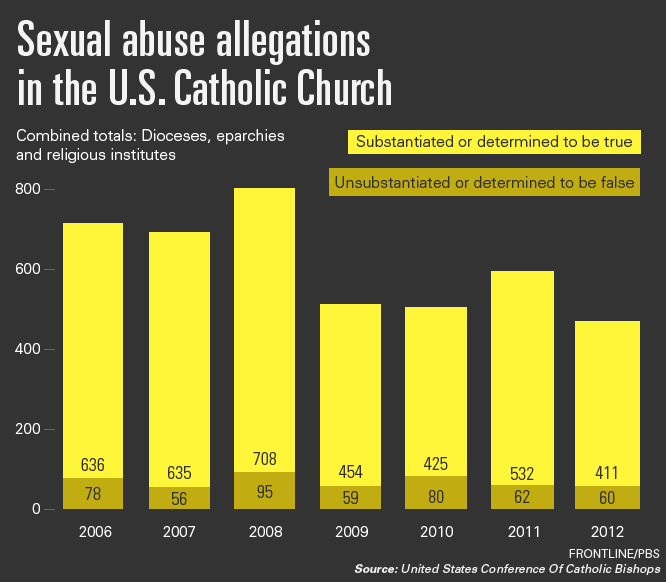 Each diocese determines on its own whether an allegation is credible. A recent investigation of the Archdiocese of St. Paul and Minneapolis by MPR News found that after adopting a rule barring abusive priests from the ministry, officials raised the burden of proof for credible allegations. “Church officials created difficult, vague and shifting criteria for an allegation to be deemed credible,” the MPR investigation found, noting that church officials dismissed some cases because the people seemed “too angry to be believed.”

To senior church officials, the pattern of allegations, the bulk of which emerged in 1970s and 1980s, suggests that the abuse crisis is winding down. “The peak of the curve is not moving forward or broadening as time goes on,” said Al Notzon III, a layperson and chair of the conference’s National Review Board, which is charged with helping to oversee the U.S. church’s efforts to protect children, at a 2012 presentation to U.S. bishops.

Victims’ advocates say it will take time to determine whether the crisis is subsiding, since most victims don’t report abuse until they’re adults. Either way, said Patrick Wall, a former priest and victims’ attorney, the hundreds of new allegations that arise each year are still cause for concern.

What the Church Has Done

When the first allegations in the U.S. emerged in 1985, the Conference brushed off advice to take proactive steps to confront them.

“They made it clear that they did not think this was a problem,” Fr. Tom Doyle, a canon lawyer, told FRONTLINE. Doyle worked with another priest, Fr. Michael Peterson, and attorney Ray Mouton, to draw up guidelines for handling the crisis. Their manual recommended reporting allegations to civil authorities and cooperating fully with police.

The men mailed a copy to every bishop in the country at their own expense. But ultimately the Conference chose not to implement the guidelines.

“They were still operating under the belief that they could use their stature, the deference that they were accustomed to receiving from the American society … in controlling what they did not see to be a potential bombshell,” Doyle said.

Nearly two decades later in 2002, after The Boston Globe broke a series of stories detailing a broader crisis, the public backlash forced the church to confront the problem. The Conference founded a committee dedicated to protecting children, and established a charter with guidelines to prevent abuse and deal with allegations.

Most of the guidelines were similar to what Doyle, Mouton and Peterson had proposed in their 1985 manual, including reporting all allegations to the police and cooperating with investigations. Today, allegations are also supposed to be forwarded to a review board appointed by the bishop. The board reviews the evidence and makes recommendations on whether or how to discipline the offender.

“Perhaps the most important advancement for the church in the last decade is a realization of its leaders that cooperation with legal authorities is in the best interest of the church,” Notzon, the review board chair, said during his 2012 presentation.

Notzon said that most dioceses now follow that procedure, but acknowledged that not all do. “Those few cases that are not reported [to the police] quickly become news,” he said. “The harm that can be done to children — and at a distant second, the negative publicity that results — should serve as reminder to all of how important it is to follow canon law, diocesan policy and state law.”

The Conference didn’t respond to an email and phone call seeking a comment on its handling of the crisis.

The Cost of the Crisis

When Doyle and his colleagues wrote their manual in 1985, they warned that abuse allegations could cost the Catholic Church $1 billion over 10 years if it failed to act. By 2012, nearly two decades later, it had spent more than $2.6 billion in civil suits in the U.S. alone, including therapy costs for victims and the price of defending the alleged abusers, according to the Conference. 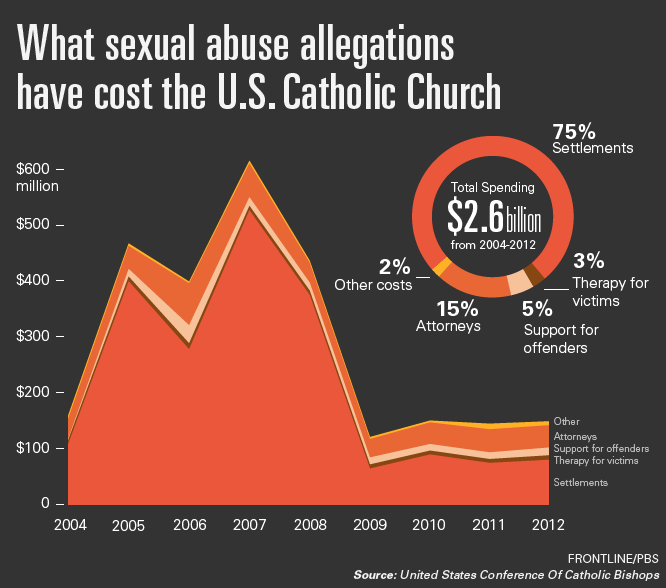 The tally is likely to rise. In Minnesota last year, the state legislature passed a law lifting the civil statute of limitations for child victims of sexual abuse, clearing the way for more lawsuits. This month, the archdiocese of Los Angeles settled with 17 people who said they’d been abused as children by a priest or other church employees, for $13 million. The Kansas City diocese has so far spent $3.75 million to settle civil suits against Ratigan. There are two more civil suits pending against Ratigan.

A Problem for the New Pope

Critics of the Catholic Church say that recalcitrant bishops have taken their cues from Rome.

“Every action taken by every bishop and archbishop and cardinal in connection with sexual abuse is effective orchestrated and controlled by the Vatican,” said Jeff Anderson, a victims’ attorney in St. Paul, Minn. “Every action taken has demonstrated to us that all roads lead to Rome and to the Vatican and to the papacy. And it is the papacy that has made the decisions historically and to the present to make sure that scandal is to be avoided.”

A year into his papacy, Pope Francis has suggested some willingness to confront the problem. Last year, he amended Vatican law to specify sexual violence against children as a crime and set up a committee in the Vatican to make recommendations for addressing the crisis.

But the Vatican also declined to cooperate with an investigation by the U.N. Committee on the Rights of the Child, which found that, when it came to child abuse, “the Holy See has consistently placed the preservation of the reputation of the church and the protection of the perpetrators above children’s best interests.” Archbishop Silvano Tomasi, the Vatican’s observer at the U.N., said the report didn’t reflect recent progress in addressing the crisis.

The Vatican also recently refused to extradite Jozef Wesolowski, a Polish archbishop who has been accused of sexually abusing teenage boys in Poland and the Dominican Republic, and is believed to be living in the Vatican.

“That’s on this pope,” said SNAP’s Clohessy. “He’s obviously a likeable, warm, humble, compassionate man. But many of us who were molested can say the very same thing about the priests who molested us, and the bishops who rebuffed us. … It takes not symbolic action, but real courage to say, ‘I’m demoting you, or kicking you out, because you put kids in harm’s way.’”

Meanwhile, back in the U.S., more than 100,000 Catholics in Kansas City signed a petition asking the pope to initiate an investigation to determine whether Finn violated church law when he failed to take action on Ratigan.

Earlier this month they received a letter from a papal representative, telling them the letter had been forwarded on to the Holy See.

Secrets of the Vatican

Charleston’s state-funded tourism marketing group stowed nearly $2 million in public money in an offshore account. The chief executive said she could understand that this might provoke some suspicion, but the account was used strictly for business and the public’s good.
September 23, 2022
Show more