In the wake of the Newtown shooting, President Obama repeatedly called for new gun-control legislation, insisting in his State of the Union address that such measures at least “deserve a vote.”

On the Congressional level, high-profile bills making it a felony to buy a gun for someone else and reinstating an assault weapons ban have passed the Senate Judiciary Committee in the past week but face an uncertain future in the full Senate. Lawmakers have quietly made four gun-rights provisions permanent, including one that prevents the Bureau of Alcohol, Tobacco and Firearms from requiring gun dealers to keep inventories to make sure no weapons are lost or stolen.

Most of the movement on gun legislation has been at the state level. Since Jan. 1, a raft of new bills has been introduced, with 574 proposed bills to strengthen gun controls, and 512 to bolster gun rights, according to a new analysis by the Law Center to Prevent Gun Violence, which tracks state gun laws. Connecticut alone has introduced more than 100 gun-control measures and as well as a handful of gun-rights bills since the shooting.

And 54 additional measures — about half pro-gun, half gun-control — were already pending when the Newtown shooting happened on Dec. 14 and are still in front of state legislatures. 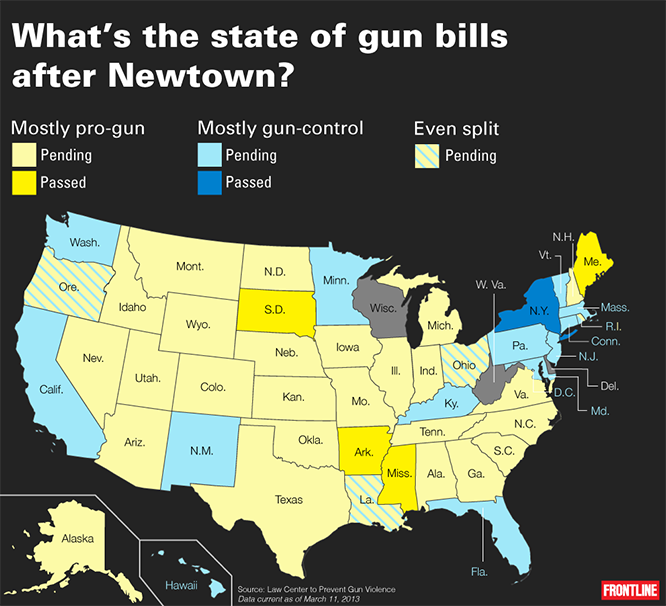 All but one of the bills that have become law to date have strengthened gun rights rather than restrained them, according to Laura Cutilletta, a senior staff attorney at the center, who compiled the analysis of passed and pending legislation, which is current as of March 11.

“There are definitely more bills that have been introduced that would strengthen gun laws, but what have been moving so far are gun lobby bills,” she said.

Only New York has passed a new gun-control law, which includes an assault-weapon ban and a high-capacity magazine restriction. Lawmakers moved it quickly, suspending the required three-day waiting period between proposed legislation and the vote, which was held at midnight. It was signed into law Jan. 15, but because of the quick turnaround, it’s already being challenged in court.

Arkansas, meanwhile, has enacted three laws that allow guns in houses of worship and on college campuses, and ban the release of concealed-carry permits to the public. Mississippi also protected concealed-carry records and expanded provisions for people seeking to carry concealed firearms in public. South Dakota allowed schools to arm employees or volunteers to protect the campuses.

Alabama, Kentucky, Tennessee, Virginia and Wyoming have also sent pro-gun bills to be signed by their governors, which include allowing judges to be armed in the courtroom (Wyoming) and schools to organized armed security forces (Alabama).

Gun-rights groups have long organized at grassroots levels. The NRA has regional offices led by staff members known as field representatives to lobby on state laws and organize gun enthusiasts. It tracks every bill, even down to municipalities, that might infringe on gun rights, and encourages its supporters to contact lawmakers to back their cause. In recent hearings on potential legislation in Connecticut and Colorado, gun-rights voters turned out in force.

But the tally of pro-gun and gun-control bills could change. Many of the states moving gun-rights legislation are rushing to pass their bills before the end of their legislative session, which comes up for some in April or May, Cutilletta said. Each state’s legislative session differs, and as some states considering gun-control legislation have later recess dates, they could have more time to enact their proposals.

“We will see what happens at the end of the year,” she said.