Why Afghanistan’s Children Are Used as Spies and Suicide Bombers

“We here in Afghanistan, we see all the fighters. We learn from them,” says the 17-year-old Afghan boy, holding a gun and swaying back-and-forth. He doesn’t make eye contact as he speaks. “God willing, we want to be like them.”

His name is Naimatullah, and he says he has been trained to carry out a suicide mission. He even has a target, a local pro-Afghan government warlord that his commander wants to kill.

The commander of Chapa Dara district, who has pledged loyalty to the Islamic State in Iraq and Syria, says Naimatullah, as well as a 13-year-old named Bashrullah, have been trained to carry out suicide attacks.

“Our commanders get their orders from ISIS,” Naimatullah says. “If they prepare a car bomb, wherever they say do it, I will do it.”

Naimatullah is on the older side, but in the new FRONTLINE documentary ISIS in Afghanistan, ISIS fighters claimed to be teaching children as young as three about jihad.

In a country that has experienced nearly endless conflict for more than 30 years, Afghan children have regularly been recruited, joining militant groups ranging from the Taliban and the Haqqani network, to state-backed militias, and local and national police forces.

But the emergence in Afghanistan of militants aligned with ISIS has only increased the chances of children joining the fighting. With rising violence and insecurity, experts say it will only get harder to protect children from a landscape in which they can be used as couriers, spies, fighters, and sometimes, even suicide bombers.

“The recruitment and use of children in most places, including in Afghanistan, has to be viewed in the context of widespread poverty, lack of opportunity, lack of access to education and employment, and a complete failure of the rule of law,” says Charu Lata Hogg, policy and advocacy director of the human rights group Child Soldiers International.

The government has limited reach in areas controlled by the Taliban, ISIS’s Afghan affiliate or other insurgent groups. These armed groups employ various methods to recruit children — including coercion, financial assistance, or offering protected status for either the child or his family.

“The Taliban in Afghanistan and Pakistan have this dynamic where they can force people to give up a child by saying, ‘You can either give us this amount of money — which is usually more than an annual salary — or you can give us one of the kids,” Mia Bloom tells FRONTLINE. “And because the families are quite large, the parents then have to make this Sophie’s choice of which child they’re going to give up.”

Bloom, a professor of communication at Georgia University, is currently co-writing a book called Small Arms: Children and Terror, which examines the recruitment and use of children by terrorist groups. She says that in some cases, families who’ve given up a child to an armed insurgent group like the Taliban might be compensated. In effect, one child is sacrificed for the wellbeing of the family.

For the children themselves, the kinds of compensation or benefits offered are also much greater today than in the past. “It used to be a mobile phone and a gun, and a level of prestige that was accorded,” says Hogg. “Now actual cash is changing hands.”

Another way children join armed groups is through family or social ties. If their father or brother belongs to a group, it’s more likely they’ll join too.

“If groups hold territory and establish an influence in schooling systems, this can be another way through which children can be recruited,” says Leah Farrall, a counterterrorism research associate at University of Sydney. This seems to be the case in the village of Shaigal, where FRONTLINE’s Najibullah Quraishi saw ISIS fighters integrating into local lives and teaching their ideology at the local school.

Insurgent groups and terrorists capitalize “on an environment in which there’s hopelessness, and a lack of feeling that there’s a future ahead of you,” Bloom says. “So, what they’re promising is an afterlife in which everything is perfect.” Because children are too young to be genuinely radicalized, to have an ideology, they are often lured in with food or candy, and the groups reinforce the notion that the children are doing something for the greater good.”

“A deep sense of filial responsibility and prestige” and patriotism play a role in children joining the Afghan National Police or Afghan Local Police, according to Child Soldiers International. But for children joining the ANP or ALP, poverty still remains the principle driver, with potential salaries for the ALP ranging from $103 to $155 per month, and salaries for the ANP ranging from $172 to $310.

Once recruited, children may be used for a range of war-related activities. The Taliban has been named as a recruiter of children since 2007, according to the United Nations. Children recruited by the Taliban and other insurgent groups in Afghanistan have been used as messengers and lookouts, as well as for espionage or even suicide attacks in more extreme cases. In Feb. 2014, for example, a 14-year-old boy detonated his explosives near a police checkpoint in Paktika province, killing himself, six civilians and injuring five police officers.

In all, 20 boys were killed carrying out suicide attacks from Sept. 2010 and Dec. 2014, according to a report prepared by the U.N. Secretary-General on children and armed conflict. Witnesses cited in the report described one incident where a suspected member of the Taliban “forced a boy to push a bicycle-borne improvised explosive device (IED) towards an Afghan National Army vehicle, killing himself and eight civilians.” In other instances, boys as young as six were used to unknowingly transport explosives in 2014, and two of the three were killed when they detonated. In 2013, another six boys were wounded while assembling an IED.

While research is scant, the general assumption among experts is that groups like the Taliban use children for such bombings because children are less likely to arouse suspicion.

“Child operatives are generally subject to less scrutiny than adults, easier to recruit, more malleable, easier to train,” Hogg says. “They’re easier to use for ‘suicide’ bombings, in which they are victims of exploitation, because they’re much more impressionable.”

And when directing children to carry out such attacks, the militants training them use trickery, says Bloom.

“They’ll tell children that if they become a martyr they won’t feel any pain at the moment of the explosion,” says Bloom. “They even go through the motions with the older kids of burying them alive to get used to the idea that they rise from the dead, or they shoot them with fake bullets to show that they’re invincible.”

Recruiting children also helps build a group’s “longevity and resilience,” says Farrall. ISIS central, based in Iraq and Syria, and its competitor, Al Qaeda’s Syria affiliate the Nusra Front, have both publicized their efforts at training children, claiming that they’re training the next generation of jihadis. ISIS’ so-called “Cubs of the Caliphate” are part of its long-term strategic plan to create what it considers an “ideologically pure” army.

Bloom, who has researched the use of children by armed groups ranging from the Tamil Tigers to child soldiers in Liberia, Sierra Leone and the Democratic Republic of Congo, says, “How much you educate the child indicates whether you see them as the next generation or canon fodder.”

Among government-aligned groups, children may cook, clean, and make tea before they’re eventually trained to take up arms. Child Soldiers International noted that it has received anecdotal reports of commanders in some parts of Afghanistan using children as bodyguards during the day and sexually abusing them at night.

IS THERE A WAY OUT?

There are no clear estimates of how many children are currently fighting in Afghanistan. The best guess is provided by a U.N. task force, which documented the recruitment and use of 556 boys and four girls during the period from Sept. 2010 to Dec. 2014, 75 percent of whom were recruited by groups fighting the government. But the U.N. noted that serious concerns of underreporting remained.

In 2011, Afghanistan signed an action plan with the U.N. to end underage recruitment and use, and last year the government started implementing a “Road Map towards Compliance” that would include measures to criminalize the recruitment and use of children by security forces. A briefing by Child Soldiers International in June, however, noted, that the government’s “ability to implement its international commitments and adhere to its own national laws and policies remains stretched.”

Another challenge in the absence of any sort of framework to criminalize the recruitment and use of children, is the lack of rehabilitation programs for those who have fought or trained in armed groups. As Hogg notes, “There’s nothing to support their rehabilitation, whether psychological, physical, emotional or educational. There is absolutely no service in place at the moment.” 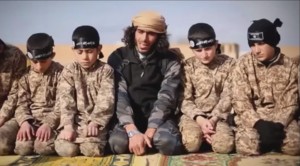