Thirty years ago, Charlie Cole snapped one of the most iconic photos of the century. And then he stashed the undeveloped film in his hotel room toilet.

It was June 1989, and Cole, a photojournalist, was in Beijing on assignment for Newsweek. After weeks of student-led protests calling for pro-democracy reforms, the Chinese government began to violently suppress the groups gathered at Tiananmen Square. Throughout their efforts to stanch protests, the People’s Liberation Army (PLA) is estimated to have killed hundreds to thousands of demonstrators. The exact number is still unknown.

As violence broke out around them, reporters and photographers from the foreign press had to crouch beneath gunfire to document what was happening. But that didn’t stop Cole from photographing what he witnessed on June 5.

The morning after violence reached its peak in Tiananmen Square, a column of tanks rolled east down Beijing’s Chang’an Boulevard.  Suddenly, a lone man in a crisp white shirt appeared. He carried nothing but a bag and jacket, as if he’d been running errands.

The Tank Man, a FRONTLINE film that aired in 2006, explored this extraordinary confrontation through the perspectives of those who were there to witness it.

In the above clip, Cole described watching as “tank man,” as he would come to be known, stood in front of the first of a line of combat vehicles, continuing to block its path as it attempted to maneuver around him. As Cole snapped photos of the standoff, he feared the worst.

“I’m thinking, ‘This guy is going to be killed any moment now. And if he is, I just can’t miss this. This is something that he’s giving his life for. It’s my responsibility to record it as accurately as possible,’” he told FRONTLINE.

Eventually, a group of people — it is still unclear who they were — ushered the man to the side, and the tanks passed through.

To this day the tank man’s identity is unknown, though photos of him ran on the front page of newspapers worldwide. And that is thanks, in part, to people like Cole, who was one of the journalists there to capture the standoff. As he photographed the scene, Cole says that he noticed the Chinese Public Security Bureau (PSB) watching him through binoculars. He had to act quickly to assure that his photos of the historic event would make it out of China.

“I went in and took the film out of the camera and reloaded it into the plastic film can, and went into the toilet, took off the top of the toilet and put it in the holding tank, put the toilet top back on,” Cole recalled.

About 10 to 15 minutes later, the PSB broke through the door of Cole’s hotel room. The officers took a roll of film that Cole had shot from the night before, forced him to sign a confession that he had been photographing during martial law and confiscated his passport.

“They were pretty satisfied they’d cleaned up the situation,” Cole added.

Cole returned to the bathroom a day and a half later to find that the film was still there.

“Luckily nobody had flushed the toilet,” he said.

He had the film developed at the Associated Press office in Beijing, and the photo was transmitted to Newsweek in time for his deadline. Cole went on to win the 1990 World Press Photo of the Year, one of the most prestigious awards in photojournalism, for the iconic shot.

Since the photos of the tank man published, the Chinese government has worked diligently to keep them from surfacing.

Earlier this year, four men in southwestern China were sentenced up to four years in prison for selling Tiananmen-themed liquor in bottles that evoked images of the tank man. The liquor had been maturing since 1989, the same year as the crackdown on the Tiananmen protests.

Though his identity and fate are unknown, 30 years later the photo of tank man’s defiance is still widely regarded as symbol of the protests. 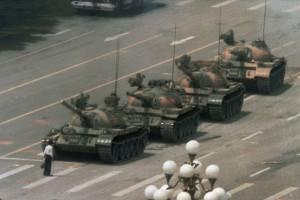