The president’s apparent departure came on the same day that the rebels seized Al Anad air base on the outskirts of Aden. Until recently, the base had been used by American counterterrorism forces.

Hadi’s exit from Aden, if confirmed, would appear to deepen a power vacuum in a country that is home to one of Al Qaeda’s most powerful branches. In January, Hadi, his prime minister and his entire cabinet, resigned from office after Houthi rebels tightened their grip on the capital of Sanaa.

So who are the Houthis? Safa Al Ahmad explored this question as she recently traveled across Yemen for The Fight For Yemen, which will air May 12 on FRONTLINE.

As recently as September, President Obama was touting Yemen as a model for the U.S. counter-terrorism strategy. But just last month, tensions between the Houthis and government forces pushed the State Department to close its embassy in Yemen, leaving the U.S. role there uncertain.

“The Houthis don’t need the West for support. And that, I’m sure, is worrying Washington,” said Laura Kasinof, the author Don’t Be Afraid of the Bullets: An Accidental War Correspondent in Yemen, in a recent interview with FRONTLINE. “We just don’t know yet what the Houthis are going to do.”

Explaining the history of the Houthis in Yemen, Kasinof added:

They fought an on-again, off-again war since 2004 with the Yemeni government, but it was always fought in the far north, far away from the capital.

But since the government broke down in 2011, as a result of the Arab Spring, the Houthis have expanded their territory within the north — where they live — and have slowly made their way to the capital, fighting tribes along the way and making alliances with other tribes.

Eventually, last September, they stormed Sanaa, took over some government ministries, and since then have been pushing their will on the Yemeni government. The president, Hadi, didn’t really have a choice other than to resign given the situation.

There certainly is a relationship with Iran. The extent to which Iran is dictating the Houthis decisions and movements right now? Not so much. There are a lot of local grievances in Yemen. It’s not like every single move they do is somehow dictated by Iran. Iran tried to increase its influence in Yemen since 2011. It saw an opening when the [Arab Spring] protests started. I spoke to young Houthi activists who were flown to Tehran to attend [ideological] conferences. It seems that they’re also financially backed by Iran.

Certainly, the Houthis are an enemy of Saudi Arabia. Saudi Arabia sees them as being an extension of Tehran in Yemen.

Part of Houthi rhethoric is anti-American, but their actions have not been anti-Western — yet. The Houthis have been against Al Qaeda, for sectarian reasons. Al Qaeda encroached upon their territory in northern Yemen.

[The current situation] is certainly going to disrupt American relations. The Houthis have a local base of support whereas President Hadi did not. 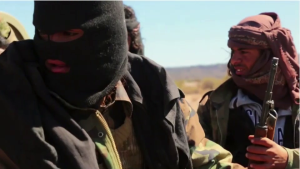