The Case of the Liberty City Seven

Dan Reed (Leaving Neverland) discusses his new FRONTLINE documentary, In the Shadow of 9/11, the story of how seven Black men from Miami were accused of planning an Al Qaeda plot to blow up American buildings.

Their indictment marked the federal government’s first major post-9/11 counterterrorism sting within the U.S. Yet the men, who came to be known as the Liberty City Seven, had no weapons and had never communicated with anyone from Al Qaeda.

Reed joins The FRONTLINE Dispatch to discuss why this was a story he wanted to tell; how he built trust with sources, including the accused men themselves and an FBI agent with a key role in the sting; and what the documentary reveals about the federal government’s post-9/11 counterterrorism tactics — notably its use of informants and sting operations.

“It’s a story that really needs to be told, because Americans … have the right to know what techniques have been used to keep the country safe after 9/11,” Reed tells FRONTLINE’s executive producer, Raney Aronson-Rath. “But it’s just a very challenging story to tell. … I really think that FRONTLINE is the only place on American television that I could have done this.”

The feature-length documentary In the Shadow of 9/11 is now streaming on FRONTLINE’s website, the PBS Video app and YouTube. 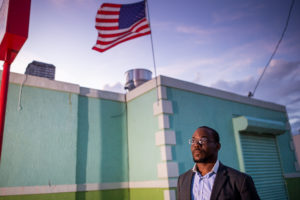