Get a Closer Look at "The Daily Citizen" 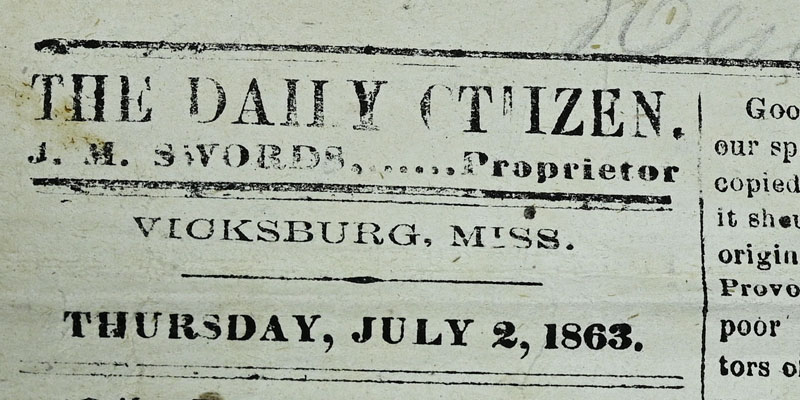 During ROADSHOW’s 2019 stop at Desert Botanical Garden, one guest brought in what appraiser Catherine Williams considered “one of the most famous pieces of memorabilia from the Civil War."

During ANTIQUES ROADSHOW’s 2019 event at the Desert Botanical Garden in Phoenix, Arizona, a guest named Robert brought in a wallpaper edition of The Daily Citizen that was published in Vicksburg, Mississippi, on July 2, 1863, the day the Union Army took over the city. Robert found the paper folded up in an envelope one day while he and his wife were organizing a few of his mother-in-law’s belongings. After researching the newspaper on the internet, he checked with the Library of Congress and confirmed the paper’s provenance.

Robert's wallpaper edition refers to the newspaper having been typed up and printed on an actual piece of wallpaper. According to an article published on April 1, 2015 through the Serial & Government Publications Division of The Library of Congress, the publisher and editor of The Daily Citizen, J.M. Swords, had resorted to using pieces of wallpaper to publish the Citizen on as the supply of newspaper print dwindled in the South during the Civil War.

Collectibles appraiser Catherine Williamson pointed out the significance of this edition of The Daily Citizen, calling it “one of the most famous pieces of memorabilia from the Civil War.” According to Williamson, on July 2, 1863, the editor of the paper — J.M. Swords — set up his type to run that day's edition, but then had to abandon his work and flee the city. Two days later, the Union Army arrived:

“They find this typeset paper almost set up, and they add a little bit of a note here at the bottom that indicates that the authors are not the Confederate sympathizers of the Vicksburg press...but in fact, […] is the Union Army.”

The note Williamson identified read, “Two days brings great changes.” She then went on to explain why she believed the newspaper was a true first edition:

“There's actually a first state and a second state. The first few printings, this word, "citizen," is misspelled, C-T-I. Several copies were run off, and then somebody figured out, ‘Oops, that's misspelled.’ They corrected it and continued to print them.”

Robert had the misspelled version.

“So, you have the true first state of this very famous piece of memorabilia,” Williamson said.
Based upon the historical significance of the item, Williamson gave Robert's copy of The Daily Citizen an auction estimate of $3,000 to $5,000.

Get a close-up look at Robert’s incredible family heirloom below!

Note written in The Daily Citizen on July 4, 1863 by the Union soldiers

“Two days brings great changes. The banner of the Union floats over Vicksburg. Gen. Grant has “caught the rabbit;” he has dined in Vicksburg, and he did bring his dinner with him. The “Citizen” lives to see it. For the last time it appears on “Wall-paper.” No more will it eulogize the luxury of mule-meat and fricasseed kitten — urge Southern warriors to such diet never more. This is the last wall-paper edition and is expecting this note, from the types as we found them. It will valuable hereafter as a curiosity.

Concerning Confederate Materials in the Marketplace
ANTIQUES ROADSHOW seeks to balance cultural sensitivity with its aim of examining the full spectrum of America's antiques and collectibles.

Note written by members of the Union Army when they arrived in Vicksburg.
About the Author Melanie Albanesi
Melanie Albanesi is an associate digital producer for ANTIQUES ROADSHOW.
More from PBS