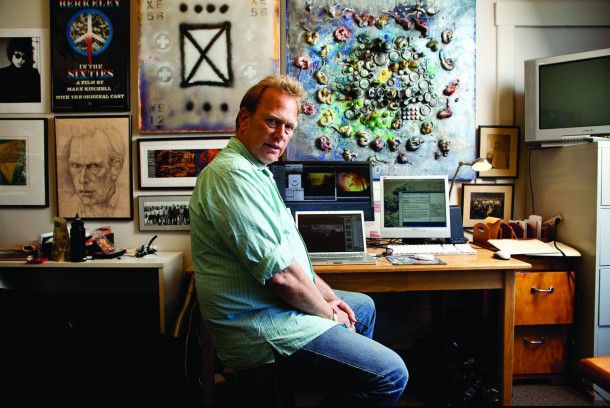 Like Berkeley in the Sixties, my previous work which has become one of the defining films about the protest movements of the 1960s, A Fierce Green Fire started with the idea that a big-picture synthesis of environmentalism was needed. It’s the biggest movement the world has ever seen, yet so broad and diffuse that we lack a larger sense of what it was about. This film is meant to take stock, explore the historical meaning of the environmental movement, where we’ve come from and where we’re heading. A hugely ambitious undertaking, it has proved to be the greatest challenge of my career. 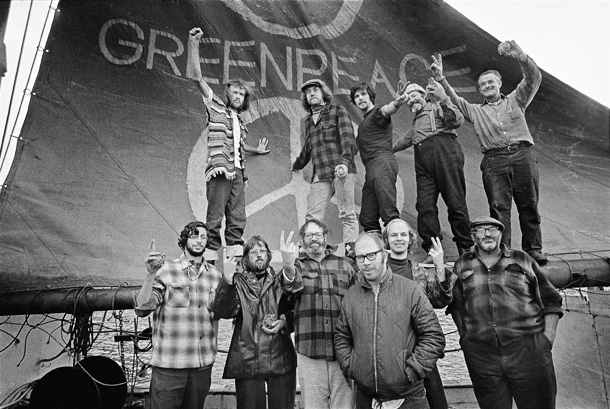 The crew of the Phyllis Cormack, also called Greenpeace, formed the original group that became Greenpeace. This is a photo taken on the first Greenpeace voyage, which departed Vancouver, Canada on September 15, 1971. The aim of the trip was to halt nuclear tests in Amchitka Island (Alaska) by sailing into the restricted area. Photo Credit: Greenpeace / Robert Keziere

In making the film we had two big concerns. One was what to include and what to leave out. The second was shaping the film — how to connect the diverse parts, structure it all into a cohesive and coherent story, find the arc of the environmental movement. The first iteration of this film was a six-part series. After a few years of trying to launch it, Edward O. Wilson, eminent conservation biologist and advisor to the film, told me we were never going to get something so big funded; and, if we did, no one would watch it. He suggested a smaller film that focuses on five of the most important and dramatic events and people. That proved to be the key.

Those five main stories – David Brower and the Sierra Club halting dams in the Grand Canyon; Lois Gibbs and the people of Love Canal battling 20,000 tons of toxic waste; Paul Watson and Greenpeace saving the whales; Chico Mendes and the rubbertappers saving the Amazon forest; and (what else could we end on?) the twenty-year struggle to deal with climate change – are emblematic of strands and eras of environmentalism. So we built the acts into an hourglass shape. Each begins wide, with origins and context. Next we narrow in on the main story. Then they open up again, to explore ramifications and evolution. 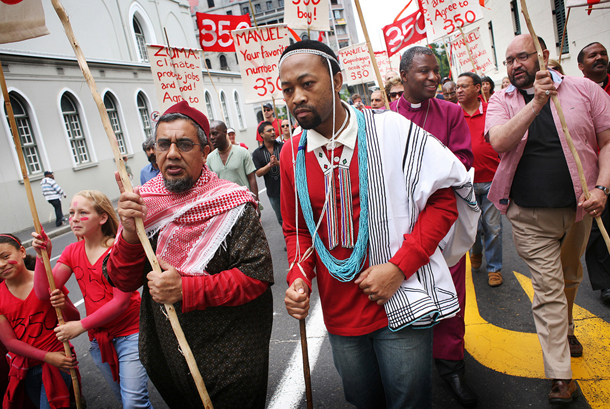 The film went through two rounds of shooting interviews, gathering archival material, scripting and editing a rough-cut. Some stories, like biodiversity, fell out. The last act on climate change had to be put off until there was more funding. We worked on the acts in pieces and I wasn’t sure it would all connect. By May of 2010 we had a first cut of the full film. It showed a lot of promise. The middle acts were working well but the first and last acts needed to be taken further.

The fine-cut phase in 2011 was tortured. We got a Sundance Documentary Fund grant, but it ran out and we had to stop. Then a deal for completion funds fell through and we had to stop again. It was only upon acceptance to the Sundance Film Festival that finishing the film came together. We had a 135-minute cut, but the consensus was that it was too much. In an amazing three weeks, two great editors working with me cut the film down to 110 minutes. We shaped it into a whole, and finally figured out the ending.

After Sundance we took the film the final 10 percent of the way. The biggest task was narration. Robert Redford and Meryl Streep agreed; then Ashley Judd, Van Jones and Isabel Allende rounded out the cast. We also edited the film down to 100 minutes; licensed and mastered archival material; did a new opening to The Chamber Brothers’ “Time Has Come Today” (1968); and reworked the closing mosaic. It was great to have a chance to finish the film right and I’m most grateful to the funders who made it possible.

However we weren’t done yet. For American Masters, which wanted a one-hour version, we had to further cut down the film in half. So I went back to Edward O. Wilson’s idea of five stories. Just those main scenes got us close to length right away. Then the challenge became how much exposition was needed. Scripting it, I took out big chunks and did a lot of smaller cuts. Then editor Bob Dalva did amazing work, “pinching” and finding edits I never imagined. The cutdown went well. I’m amazed at how good and complete it is.

It was deeply gratifying all the favors and contributions everybody brought to my baby. And in the end I think, I hope we succeeded in capturing that big-picture synthesis of the environmental movement. How well we explored the meanings of environmentalism and how useful it is going forward remain to be seen. But it’s exciting to see the world taking interest. It’s time for that next step of the environmental journey.

Mark Kitchell is best known for Berkeley in the Sixties, which won the Audience Award at the 1990 Sundance Film Festival, was nominated for an Academy Award, and won other top honors. The film has become a well-loved classic, one of the defining documentaries about the protest movements that shook America during the 1960s. Since, he has worked in non-fiction television, made films for hire, taught at University of California, Santa Cruz (UCSC), done freelance production and devoted over a decade to developing, making and distributing A Fierce Green Fire. Kitchell’s career began with Grand Theft Auto. He went to New York University (NYU) film school, where he made The Godfather Comes to Sixth St., a cinéma vérité look at his neighborhood caught up in filming The Godfather II — for which he received another (student) Academy Award nomination.

Marc Weiss is best known as creator and executive producer of P.O.V., the award-winning independent documentary series now preparing for its 27th season on PBS. He has been a leader in the independent media movement for 40+ years as a filmmaker, journalist, organizer and innovator in using the Internet to engage people on social issues. In 2011, Marc co-produced When Strangers Click with Robert Kenner and Gun Fight with Barbara Kopple, both for HBO. Since then, he has put his film work on hold to become a climate change activist with several organizations.

Ken Schneider has lots of distinguished documentaries to his credit: Have You Heard From Johannesburg?; Sowing the Seeds of Justice; Orozco: Man of Fire; Freedom Machines; American Masters – Ralph Ellison: An American Journey; The Good War and Those Who Refused to Fight It; Born in the USA; Regret to Inform; School Colors; Brother Outsider: The Life of Bayard Rustin and many more. With his wife, Marcia Jarmel, he produced and directed Speaking in Tongues and their latest is Havana Curveball.

Gary Weimberg has directed Soldiers of Conscience; Three Women and a Chateau; Teens; The Story of Fathers and Sons; The Story of Mothers and Daughters; The Double Life of Ernesto Gomez-Gomez and Loyalty and Betrayal: The Story of the American Mob. Editing credits include Have You Heard From Johannesburg?; Ballets Russes; And the Band Played On; Earth and the American Dream; Super Chief: The Life and Legacy of Earl Warren; Dear America: Letters Home from Vietnam and many more.

Veronica Selver, a veteran, and Jon Beckhardt, a newcomer, co-edited the rough-cut of A Fierce Green Fire. Veronica directed the seminal film about gays in America, Word Is Out. She also made KPFA on the Air and Raising the Roof. She has edited some great documentaries: On Company Business; You Got to Move; Coming Out Under Fire; Blacks and Jews; and Berkeley in the Sixties. Jon is a graduate of Oberlin. He worked as animator on Mark Kitchell’s previous project, Integral Consciousness. A Fierce Green Fire was his first big editing assignment.

Vicente Franco’s credits include The Storm That Swept Mexico; Waiting to Inhale; The Most Dangerous Man in America: Daniel Ellsberg and the Pentagon Papers; Speaking In Tongues; The Judge and the General; California and the American Dream; Thirst and Freedom on My Mind. He also produced and directed three films with Gail Dolgin: Cuba Va; Daughter From Danang; and The Summer of Love for American Experience.

George Michalski wrote the theme song. A high school friend of Mark Kitchell (they built a driftwood house together) George has worked with Barbra Streisand and has numerous gold records. David Denny supplied vocals and guitar. He formed one of the seminal psychedelic bands, Frumious Bandersnatch, and in 1970 joined the Steve Miller Band, writing one of his hits, “The Stake.”

Garth Stevenson is a bassist and budding composer of films, including Tracks, The Red Knot, The Young Lakota and The Jazz Funeral.

Randall Wallace is a supporter who stepped in to help with scoring in the rush to finish the film.

Todd Boekelheide is a popular film composer from the San Francisco Bay Area.

Currently producing and directing films for HBO, Susan Lacy was an award-winning originator of primetime public television programs from 1979-2013, and created and launched the American Masters series in 1986.

As the executive producer of American Masters, she was responsible for the production and national broadcast of 200 documentary films about our country’s artistic and cultural giants, those who have made an indelible impact on the American landscape. Now entering its 28th season on PBS, American Masters has garnered unprecedented awards and is recognized by television critics as “the best biographical series ever to appear on American television.”

Garrison Keillor: The Man on the Radio in the Red Shoes
Althea
The Women's List
Jacques Pépin: The Art of Craft
John Muir in the New World
Billie Jean King