Film director Rex Miller’s childhood bedroom also served as his parents’ “tennis room.” A photograph there on the wall showed his mother, a tennis player, posing next to Althea Gibson at a tennis club outside Philadelphia. His mother always remembered her lost match against the champion Gibson with pride. It was Gibson’s tennis achievements that initially drew Miller to tell her story, but it was also her other accomplishments — recording a jazz album, earning a college degree, acting in a John Ford film — that intrigued the director and led to his documentary Althea.

Rex Miller is a visual storyteller, whose photographs have appeared in major international publications such as Newsweek, New York Magazine, Time, NY Times, Rolling Stone. In 1997 Miller completed All The Blues Gone, a hardcover book/CD package documenting Mississippi blues culture. He is co-producer and cinematographer of A Chef’s Life (2013-2014), a 13-part series broadcast nationally on PBS stations, which received a Peabody Award for Excellence in Broadcast. Learn more about his recent work on the Althea film site. 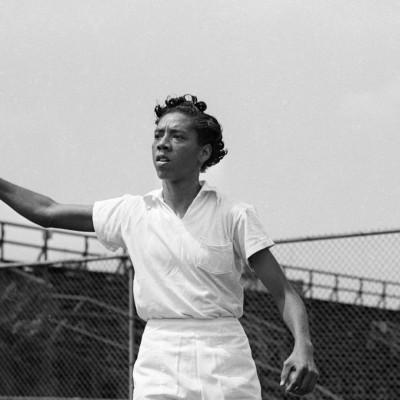 Althea Gibson Photo Gallery
Althea Gibson Biographical Timeline
Clip | When Tennis Clubs Didn’t Allow Black or Jewish Members
Clip | What it Was Like to Play at the “Mecca of Tennis,” West Side Tennis Club in Forest Hills
Althea - Preview
TRANSCRIPT

- For me, this project started with a photograph that hung on my childhood bedroom wall, which was also my parents' tennis room.

And it's a photograph of two brown skinned women in their tennis whites standing on the hallowed grounds of the Merion Cricket Club, a restricted club at the time outside of Philadelphia.

One of the women in that photograph was Althea Gibson.

And the other, was my mother, Millicent Miller who was born and raised in Jamaica and learned to play tennis down there, basically in her backyard.

She was a good local player in New York and got a chance to play in that tournament and played Althea in the first round, lost 6 0 6 1, but loved to talk about that match.

It was her tennis claim to fame playing Althea Gibson.

So years later, about 5 or 6 years ago, I got reacquainted with that photograph and basically Googled Althea Gibson and was so fascinated with her story that by the end of that day, I was making this film.

What drew me to Althea's story was initially what she achieved in tennis in that she was a trailblazer, groundbreaker, won Wimbledon and The US Nationals, which is now the US Open, 2 years in a row.

But really what intrigued me was how many other accomplishments she achieved.

She also played jazz music, she sang, she recorded an album, she got a college degree.

She became an actress and starred in a John Wayne film directed by the great John Ford, which very few people know about.

So as I delved deeper into her story, I was constantly getting surprises over how many things she did.

One of the things that surprised me and impresses me most about Althea is just her strength of character, her attitude that allowed her to break through these barriers in the world of tennis and accomplish all these things.

And I think that makes her a great role model for kids today.

And it was surprising to me how many people in the course of making this film I met, who did not know who she was or may have heard of her.

So we hope to, with this film, increase her visibility, bring her out to icon status where she belongs and just basically tell a great story in the documentary format.