Life Through A Lens

Annie Leibovitz has photographed musicians, actors, and writers since the early 1970s. She has captured some of the most enduring images of our time. 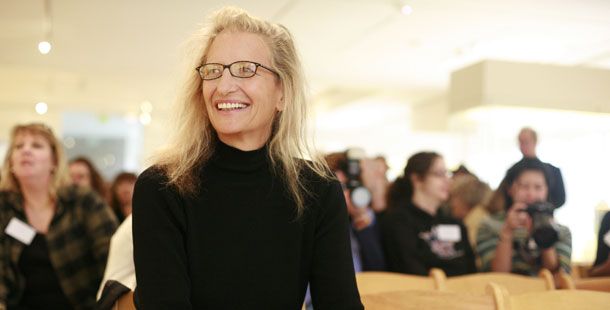 Born in 1949 in Waterbury, Connecticut, Annie Leibovitz enrolled in the San Francisco Art Institute intent on studying painting. It was not until she traveled to Japan with her mother the summer after her sophomore year that she discovered her interest in taking photographs. When she returned to San Francisco that fall, she began taking night classes in photography. Time spent on a kibbutz in Israel allowed her to hone her skills further.

When the magazine began printing in color in 1974, Leibovitz followed suit. “In school, I wasn’t taught anything about lighting, and I was only taught black-and-white,” she told ARTnews in 1992. “So I had to learn color myself.” Among her subjects from that period are Bob Dylan, Bob Marley, and Patti Smith. Leibovitz also served as the official photographer for the Rolling Stones’ 1975 world tour. While on the road with the band she produced her iconic black-and-white portraits of Keith Richards and Mick Jagger, shirtless and gritty.

In 1980 Rolling Stone sent Leibovitz to photograph John Lennon and Yoko Ono, who had recently released their album “Double Fantasy.” For the portrait Leibovitz imagined that the two would pose together nude. Lennon disrobed, but Ono refused to take off her pants. Leibovitz “was kinda disappointed,” according to Rolling Stone, and so she told Ono to leave her clothes on. “We took one Polaroid,” said Leibovitz, “and the three of us knew it was profound right away.” The resulting portrait shows Lennon nude and curled around a fully clothed Ono. Several hours later, Lennon was shot dead in front of his apartment. The photograph ran on the cover of the Rolling Stone Lennon commemorative issue. In 2005 the American Society of Magazine Editors named it the best magazine cover from the past 40 years.

Annie Leibovitz: Photographs, the photographer’s first book, was published in 1983. The same year Leibovitz joined Vanity Fair and was made the magazine’s first contributing photographer. At Vanity Fair she became known for her wildly lit, staged, and provocative portraits of celebrities. Most famous among them are Whoopi Goldberg submerged in a bath of milk and Demi Moore naked and holding her pregnant belly. (The cover showing Moore — which then-editor Tina Brown initially balked at running — was named second best cover from the past 40 years.) Since then Leibovitz has photographed celebrities ranging from Brad Pitt to Mikhail Baryshnikov. She’s shot Ellen DeGeneres, the George W. Bush cabinet, Michael Moore, Madeleine Albright, and Bill Clinton. She’s shot Scarlett Johannson and Keira Knightley nude, with Tom Ford in a suit; Nicole Kidman in ball gown and spotlights; and, recently, the world’s long-awaited first glimpse of Suri Cruise, along with parents Tom and Katie. Her portraits have appeared in Vogue, The New York Times Magazine, and The New Yorker, and in ad campaigns for American Express, the Gap, and the Milk Board.

Among other honors, Leibovitz has been made a Commandeur des Ordre des Arts et des Lettres by the French government and has been designated a living legend by the Library of Congress. Her first museum show, Photographs: Annie Leibovitz 1970-1990, took place in 1991 at the National Portrait Gallery in Washington, D.C. and toured internationally for six years. At the time she was only the second living portraitist — and the only woman — to be featured in an exhibition by the institution.

Leibovitz met Susan Sontag in 1989 while photographing the writer for her book AIDS and its Metaphors. “I remember going out to dinner with her and just sweating through my clothes because I thought I couldn’t talk to her,” Leibovitz said in an interview with The New York Times late last year. Sontag told her, “You’re good, but you could be better.” Though the two kept separate apartments, their relationship lasted until Sontag’s death in late 2004.

Sontag’s influence on Leibovitz was profound. In 1993 Leibovitz traveled to Sarajevo during the war in the Balkans, a trip that she admits she would not have taken without Sontag’s input. Among her work from that trip is Sarajevo, Fallen Bicycle of Teenage Boy Just Killed by a Sniper, a black-and-white photo of a bicycle collapsed on blood-smeared pavement. Sontag, who wrote the accompanying essay, also first conceived of Leibovitz’s book Women (1999). The book includes images of famous people along with those not well known. Celebrities like Susan Sarandon and Diane Sawyer share space with miners, soldiers in basic training, and Las Vegas showgirls in and out of costume.

Leibovitz’s most recent book, A Photographer’s Life: 1990-2005, includes her trademark celebrity portraits. But it also features personal photographs from Leibovitz’s life: her parents, siblings, children, nieces and nephews, and Sontag. Leibovitz, who has called the collection “a memoir in photographs,” was spurred to assemble it by the deaths of Sontag and her father, only weeks apart. The book even includes photos of Leibovitz herself, like the one that shows her nude and eight months pregnant, à la Demi Moore. That picture was taken in 2001, shortly before Leibovitz gave birth to daughter Sarah. Daughters Susan and Samuelle, named in honor of Susan and Leibovitz’s father, were born to a surrogate in 2005.

Leibovitz composed these personal photographs with materials that she used when she was first starting out in the ’70s: a 35-millimeter camera, black-and-white Tri X film. “I don’t have two lives,” she writes in the book’s introduction. “This is one life, and the personal pictures and the assignment work are all part of it.” Still, she told the Times, this book is the “most intimate, it tells the best story, and I care about it.”

Rachel Somerstein is a writer who lives in New York. 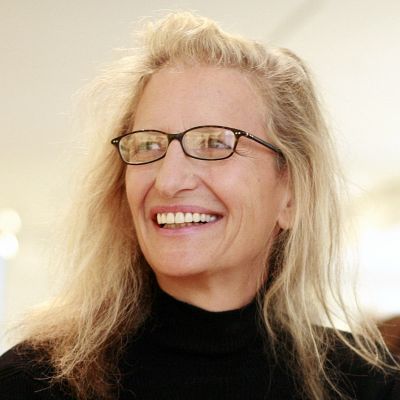