Artists discuss how Jean-Michel Basquiat painted a portrait of himself with Andy Warhol minutes after taking Polaroids together.

STREAM WITH PASSPORT
Basquiat: Rage to Riches
About the Master 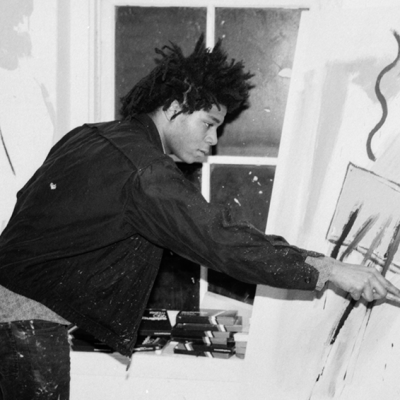 I saw Jean-Michel Basquiat he was brought by Bruno Bischofberger who was Andy's art dealer in Zurich and very close to Andy and the factory And, uh, so Andy took some Polaroids of Jean-Michel which is the way Andy started his portraits Basquiat asks me could you do a few pictures as well of Warhol and me together so Warhol gave me gave me his camera was his long camera and I made a few pictures of Basquiat and Warhol standing together.

And then instead of having lunch Basquiat said he'd like to go home to do something he can't stay for for lunch And we were we were hardly getting up for lunch the assistant of Basquiat came running up with a weight of five foot square painting which he painted after this Polaroid of the two of them.

We all gathered around to see you know this portrait of Andy and there was not only a portrait of Andy but a self-portrait of Jean-Michel and they were absolutely stunning works We put it on the floor because it was still wet you know so it wouldn't run around and we would all stand around him everybody laughing so much and Andy was like, 'Oh god you're so fast and these are so great I mean I didn't even send the Polaroids out to the lab yet And he would was looking at me halfway smiling halfway serious but fulfilled he said, 'Oh, I'm so jealous he's faster than me.'