The career of A-list Hollywood screenwriter Dalton Trumbo (Dec. 9, 1905 – Sept. 10, 1976) is notable for the films not credited to his name. Convicted for contempt of Congress in 1947 when he declined to state whether or not he was a member of the Communist Party (see archival footage of hearing, above), Trumbo spent 11 months in federal prison and lost all right to ply his craft. His remarkable life story hits the big screen this week with director Jay Roach’s biopic, Trumbo, starring Bryan Cranston as the blacklisted screenwriter. The film premiered to great acclaim at the Toronto Film Festival in September and opens in select theaters nationally on Friday, November 6. 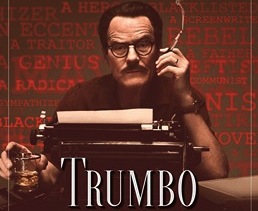 Roach’s narrative film dramatizes many of the same events depicted in the documentary American Masters: Trumbo (2009), tracing Trumbo’s mid-twentieth century journey from celebrated member of Hollywood’s inner circle to an outcast after his political battle and tenacious moral stance against the House Un-American Activities Committee (HUAC). The HUAC was formed to expose those with Communist Party membership or sympathies, as well as to undermine the activities of Leftists.  Trumbo’s defiance of HUAC was shared by nine other Hollywood creatives who together became known as The Hollywood Ten. Beyond Trumbo’s professional and personal turmoil, Trumbo depicts the exiled writer’s ultimate triumph: he secretively wrote award-winning screenplays under pseudonyms and eventually had the last laugh.

Much like the documentary American Masters: Trumbo, the drama Trumbo features a star-studded cast, including Helen Mirren, Diane Lane, Elle Fanning, Louis C.K. and John Goodman, among many other noteworthy actors.

Trumbo screenwriter John McNamara based his script loosely on Bruce Cook’s 1977 biography, Dalton Trumbo, and supplemented the text with testimony from Trumbo’s family, friends and, of course, drew on Trumbo’s own words. McNamara had access to the many memorable letters written by Trumbo, which are brought to life in American Masters: Trumbo through dramatic readings by Paul Giamatti, Nathan Lane, Josh Lucas, David Strathairn and others.