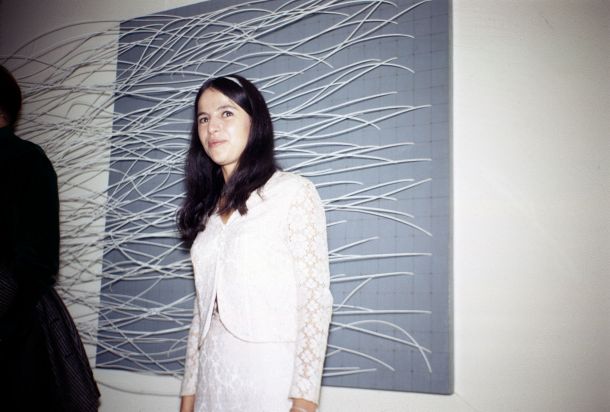 Her short but extraordinary life is the subject of American Masters: Eva Hesse, now streaming as part of “Artists Flight,” which concludes Friday, September 14 at 9 p.m. on PBS (check local listings) with a new documentary about visual artist Jean-Michel Basquiat.

She was a prolific writer
For some of her childhood and most of her adult life, Hesse kept a diary in which she recorded her thoughts and artistic desires. Published posthumously, her writings have been hugely influential in shaping the legacy of Hesse as a determined, self-assured yet anxious young woman. “Only painting can now see me through and I must see it through,” she wrote in 1960. “It is totally interdependent with my entire being. It is the source of my goals, ambitions, satisfactions and frustrations. It is what I have found through which I can express myself, my growth — and channel my development.”

Eva Hesse at her working table at her 134 Bowery studio. Photo courtesy of Hesse estate.

Her tragic death has been the subject of rumors and speculation
Eva Hesse died at the age of 34, less than a year after being diagnosed with a brain tumor. She underwent numerous treatments shortly after diagnosis, including three invasive yet unsuccessful surgeries. Rumors and speculation that her tumor was caused by exposure to resin — a compound she used frequently in her work — have lingered for decades, though they remain unproven.

Eva Hesse (right) and her sister, Helen, on the streets of New York, circa mid-1940s. Photo courtesy William Hesse.

She experienced trauma in early childhood
Hesse and her family, all of whom were observant Jews, fled Nazi Germany in the 1930s. While still a toddler, Hesse traveled with her older sister on one of the last Kindertransport trains to the Netherlands before being reunited with her family in England. After moving to New York, her parents separated and her father remarried. When she was just 10, Hesse’s mother committed suicide. Her sister, Helen, said that Eva had a strong attachment to her mother and may have suffered from separation anxiety as a result.

Learn more about ALL ARTS.