Filmmaker Kyra Thompson answers a few questions about Bob Newhart and the film.

What first got you interested in doing a film of Bob Newhart?

When I was growing up my family used to spend Saturday nights with a bowl of popcorn watching THE BOB NEWHART SHOW. And I knew the Driving Instructor and King Kong and some of Bob’s most famous routines from his early albums and loved them. So I was always a fan. Before this project I had done a documentary about at-risk youth who attended Comedy Camp and learned how to do stand-up from famous comedians. I had the chance to interview a lot of comics and became very interested in the lives of comedians. I was particularly intrigued by the processes comedians go through to create material and to prepare themselves to go on stage in front of an audience and try to make people laugh. I wanted to do something more in depth and began thinking of some of my favorite comedians — Bob Newhart topped the list. As a documentarian, you’re always looking for untold stories and as public a figure as Bob is, his story and his impact on American comedy had never fully been told before.

Yes, absolutely. Although I knew how much I enjoyed Bob’s work, I hadn’t quite realized how influential he’d been on the craft of comedy on his albums, on stage and on television. He’s such a modest person and his comedic style is so understated that he’s easy to miss when you’re looking for the giants in the field. But he absolutely is one of the giants. His first album was huge — it spent 14 weeks at the #1 spot on the charts, which is an incredible feat. That album helped usher in a golden age of comedy albums and it is still listed in Billboard in the top 20 most popular albums of the second half of the 20th century. Then you look at his TV career: He was one of the first stand-ups to transition to sitcom as a full-blown character that was still true to his comedic persona. Today the stand-up to sitcom star move is standard but he really paved the way for that. And he carried two hugely successful sitcoms over two consecutive decades. Almost no other star, except perhaps Lucy, has done that.

Another thing that surprised me and inspired me actually, was the fact that Bob had been living at home with his parents, feeling very uncertain about his future until he was 30. He had a dream of pursuing comedy and didn’t give up on it even though his chances must have looked pretty slim by then. As he told me, he wondered whether he could succeed in comedy and he just had to find out. I like stories about late-bloomers because it gives the rest of us hope.

One of my favorite parts of the process was during the pre-production when Bob agreed to have several private lunches with me so I could pick his brain and just get to know him a little better. It was such a privilege to have one-on-one time with a comic legend and listen to all his stories and insights. I just sat there and tried to stop laughing long enough to eat. We also made a real find during the production phase. We had interviewed an old friend of Bob’s from Chicago (Paul Blume) who revealed that he had an original acetate recording of one of Bob’s earliest comic attempts. It was a group of routines he did with his short-lived partner Ed Gallagher, way before Bob was “discovered” by the rest of the world. It was amazing to listen to these scratchy old bits and hear how Bob’s comic sensibility was beginning to take shape. Bob himself had no idea a copy that this material still existed so it was pretty exciting. And of course, interviewing such icons as Garry Shandling, David Hyde Pierce, Tom Smothers, Larry Gelbart, Dick Martin, Tim Conway, Don Rickles, and listening to them analyze comedy was an incredible experience.

First of all, of course, I wanted the film to be funny. But I figured I didn’t have to worry too much about that — I knew Bob would take care of the laughs. But I also wanted the film to be more than that. I wanted it to convey the weight that Bob’s career has. I wanted to delve into the history of comedy itself and explore how stand-up comedy evolved over the decades and Bob’s role in that evolution. I also really wanted to involve Bob in a creative way beyond just the standard interview. He is still so vital today and continues to tour and perform and I wanted to incorporate that into the show somehow. So I asked Bob if he would be willing to do an original open for the film and I also asked if we could follow him as he prepared for one of his upcoming concerts. Bob didn’t hesitate on either score. Both of those elements are in the film and, I think, give it a fresh and unique look.

One of the trickiest things was finding a way to match the pacing and the style of the film with Bob’s. His brand of humor utilizes so much silence and his timing is so precise that you can’t edit it without ruining it. So we had to work really hard to find the right balance between moving the story along and remaining true to his delivery. We learned quickly that to do justice to his material, the film would have to be allowed to breathe the same way his comedy does.

I have been making documentaries for 15 years. This is my first AMERICAN MASTERS, which I am really excited about. As I mentioned before, I did a film about kids learning how to do stand-up comedy, so I was very familiar with that world. Previous to that experience, my subjects have ranged from war journalists to Nobel Peace Prize-nominated teens, and from women’s history to film history. I must have a short attention span because one of the things I love about this job is that you’re constantly learning everything you can about one particular subject — and then moving on to the next. 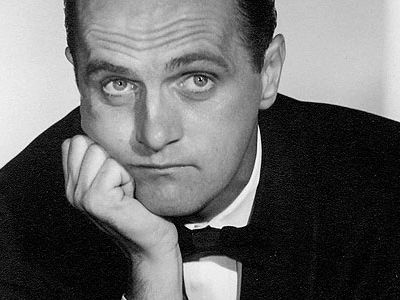