Iconic writer, director, actor, comedian, and musician Woody Allen allowed his life and creative process to be documented for the first time. Filmmaker Robert Weide followed the film legend over a year and a half to create the ultimate film biography. Woody Allen: A Documentary premieres Sunday, November 20 from 9-11 p.m. and Monday, November 21 from 9-10:30 p.m. on PBS (check local listings).

Iconic writer, director, actor, comedian, and musician Woody Allen allowed his life and creative process to be documented on-camera for the first time. With this unprecedented access, Emmy®-winning, Oscar®-nominated filmmaker Robert Weide followed the notoriously private film legend over a year and a half to create the ultimate film biography. Woody Allen: A Documentary premieres nationally Sunday, November 20 from 9-11 p.m. (ET/PT) and Monday, November 21 from 9-10:30 p.m. (ET/PT) on PBS (check local listings) as part of the 25th anniversary season of American Masters.

“This is the Woody doc everybody has been waiting for, and I am delighted that this creative giant is finally assuming his rightful place in the American Masters library,” says Susan Lacy, series creator and executive producer of American Masters, an eight-time winner of the Emmy® Award for Outstanding Primetime Non-Fiction Series. The series is a production of THIRTEEN for WNET, the parent company of THIRTEEN and WLIW21, New York’s public television stations, and operator of NJTV. For nearly 50 years, WNET has been producing and broadcasting national and local documentaries and other programs to the New York community.

“Woody Allen was always the big ‘get’ for me,” says Robert Weide, best known for his long-term directing/producing stint on Curb Your Enthusiasm, which earned him Emmy® and Golden Globe® Awards. “The prolific nature of Woody’s output has provided me with an embarrassment of riches. In fact, Woody will have made three features just in the time it’s taken me to make this one documentary.”

Beginning with Allen’s childhood and his first professional gigs as a teen — furnishing jokes for comics and publicists — American Masters – Woody Allen: A Documentary chronicles the trajectory and longevity of Allen’s career: from his work in the 1950s-60s as a TV scribe for Sid Caesar, standup comedian and frequent TV talk show guest, to a writer-director averaging one film-per-year for more than 40 years. Weide covers Allen’s earliest film work in Take the Money and Run, Bananas, Sleeper, and Love and Death; frequent Oscar® favorites such as Annie Hall, Manhattan, Zelig, Broadway Danny Rose, Purple Rose of Cairo, Crimes and Misdemeanors, Husbands & Wives, Bullets Over Broadway, and Mighty Aphrodite; and his recent globetrotting phase with Match Point, Vicky Christina Barcelona, and this year’s commercial success Midnight in Paris.

American Masters – Woody Allen: A Documentary also touches on Allen’s contributions as a writer for the theater and his casual pieces for The New Yorker, as well as his frequent moonlighting gig as a clarinet player with a New Orleans-style jazz band. “He never refused a request and he never declined to answer a question,” says Weide.

American Masters is made possible by the support of the National Endowment for the Arts and by the Corporation for Public Broadcasting. Additional funding for American Masters is provided by Rosalind P. Walter, The Blanche & Irving Laurie Foundation, Rolf and Elizabeth Rosenthal, Cheryl and Philip Milstein Family, Jack Rudin, Jody and John Arnhold, Vital Projects Fund, The André and Elizabeth Kertész Foundation, Michael & Helen Schaffer Foundation, and public television viewers. Funding for this program is provided by Miriam and Sam Blatt. 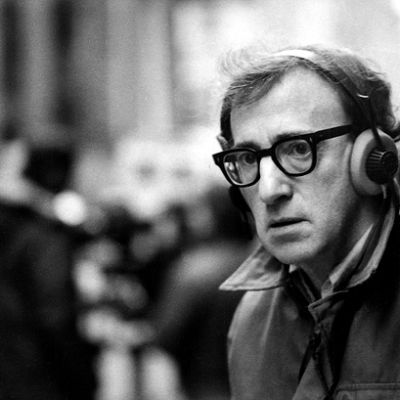 Mort Sahl: Shaping Laughter
Samuel Goldwyn: Samuel Goldwyn
Preston Sturges: The Rise and Fall of an American Dreamer
Gloria Steinem on the legacy of Marilyn Monroe
Buster Keaton: A Hard Act to Follow
HITCHCOCK,SELZNICK AND THE END OF HOLLYWOOD