1919
Cab Calloway grows up in Baltimore, a predominantly black city. During this time Cab works as a paper boy, walks horses at the racetrack, and sings all while going to school.

1924
Calloway attracts notice for both his athleticism in basketball and artistic skills. He follows in the footsteps of his older sister, Blanche, who is already a recognized performer. Cab receives a few lucky breaks filling in for important shows and helping hands from established peers, such as Louis Armstrong.

1927
Cab performs his first tour with Plantation Days (1927) in the black theatre circuit with the attendant difficulties.

1929
Calloway manages to make an impression at the Savoy Ballroom despite his orchestra’s failure (his band is kicked out, while he is hired to lead the band that beat them!). He attracts notice from Irving Mills and Duke Ellington’s musicians.

1931-1940
Cab Calloway has a residency at the Cotton Club under a  white manager and plays for predominantly white audiences.

29 December, 1931
Cab plays the Lucky Strike show. This is the first white radio show to welcome a black big band.

1932
Cab Calloway appears in 3 Betty Boop cartoons and from then on is repeatedly caricatured in cartoons of the time. 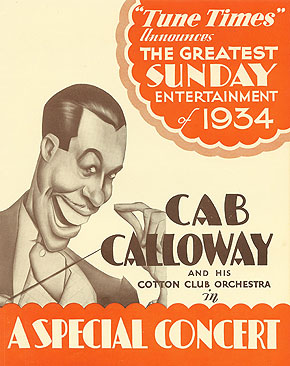 Poster for Cab Calloway and his Cotton Club Orchestra

1934
Cab takes a European tour (England, Holland, Belgium, France), and experiences the differences between the ways Blacks are treated in America versus in Europe.

1935
Cab attempts to move into a white neighborhood and is rejected by the neighbors, who put racist signs up in his front yard.

1937
Cab writes an article about how white jazz musicians are robbing black orchestras.

1941
Calloway gets involved in the struggle for black jazz musicians’ right to take the bus rather than be obliged to travel by car.

1943
Cab appears in Stormy Weather, one of the first films with an all-star black cast. Racial problems occur during filming, such as eating and housing arrangements for the cast and black press reactions. The film is censored by a Memphis D.A. 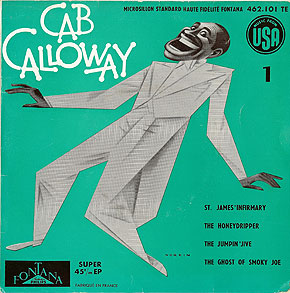 1945
Cab Calloway gets in an altercation at a Lionel Hampton concert. He is beaten by a white cop but is charged with assault.

1946
Cab throws a benefit concert for Isaac Woodard, a black soldier blinded by a racist policeman.

1948
The FBI starts a file on Cab’s activities.

1952
Cab appears in Porgy and Bess for the US and European tour.

1954
Cab is refused a seat at a bar in Las Vegas, where they’d gone for a drink with Louis Prima after a concert. Prima is so outraged by the incident that it affects the course of his career.

1958
Cat participates in the Nat King Cole Show on TV, which is in danger for ending for the same reasons as the Quizzicale.

1980
Blues Brothers creates a tribute to black culture, and a resurgence in popular interest in Cab Calloway.

1992
Cab is invited to the White House where he is decorated by Bill Clinton. 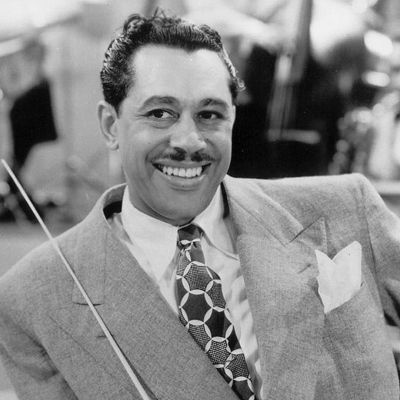