A resolutely private artist who seldom looks back, Neil Young has never before unfolded his career on camera. With unprecedented access to one of the world’s renowned music legends, American Masters presents Neil Young: Don’t Be Denied premiering nationally Wednesday, June 10, 2009 at 9 p.m. (ET) on PBS (check local listings). The film explores how Young’s unbending dedication to the muse has created an awe-inspiring body of work and bruised a few egos along the way.

“There’s no denying Neil Young as music’s most uncompromising rock royalty,” says Susan Lacy, creator and executive producer of American Masters, a six-time winner of the Emmy Award for Outstanding Primetime Non-Fiction Series. “He’s an irreverent poet with a rock and roll heart. His music embodies the arc of American experience, challenges authoritative views, defies industry pigeon-holing and continues to have an impact on musicians and fans worldwide.”

Charting Young’s musical journey from his suburban Canadian childhood to his Hollywood superstardom, an intimate camera captures the critical benchmarks and personal pitfalls of the godfather of grunge. In the late 60s, he achieved early acclaim with the short-lived yet influential psychedelic garage band, Buffalo Springfield, which launched his solo career. During this creative streak, he founded Crazy Horse and collaborated with Crosby, Stills and Nash. Adding fuel to his already rising success, these bands also shot to meteoric fame. The intensity of mega-stardom, mixed with frequent bouts of artistic differences, led to Young’s departure from both groups. He later explained his anti-star status, “I didn’t spend 10 years in the 60s and 70s creating something so I could be a prisoner of it … You know if you’re trying to stay in the favor of the public, you’re a loser – you’ll never get there.”

In the 70s, Young wrote introspective songs on multi-platinum hallmark albums, After the Gold Rush (1970) and Harvest (1972). He became an emotional chronicler on the harrowing On the Beach (1974). With his signature falsetto and idiosyncratic guitar riffs, the crude collection of tracks reflected a bleak mood stemming from the Manson massacres and Nixon’s resignation during that decade. Following the drug casualties of his two confidants (Crazy Horse’s Danny Whitten and roadie Bruce Berry), he gave the music’s answer to cinema vérité: Tonight’s the Night (1975), a spine-chilling wake for his dead friends. By the end of the 70s, he reached his peak of popularity with critics and fans favorite, Rust Never Sleeps (1979).

In the 80s, the rock veteran entered an experimental phase with hits and misses. Embracing the new waves of punk and electronica, Young teamed up with Devo on his art-house epic Human Highway (1982), a comedy film. Not one to stay static, he also released records exploring various genres including This Note’s for You (1988), a concept album criticizing the commercialism of the music industry. In the 90s, Young reunited with Crazy Horse and released the acclaimed album Ragged Glory (1990). Crazy Horse served as back-up band on Young’s solo release throughout the 90s. In 1995, Neil Young was inducted into the Rock and Roll Hall of Fame. More recently, Young promoted his Grammy-nominated, Iraq war protest album, Living with War (2006) on a Crosby, Stills, Nash and Young’s “Freedom of Speech” tour. The film ends with Young still refusing to be denied, playing an anti-Bush anthem to a Republican audience in the South.

Neil Young: Don’t Be Denied is a production of the BBC. Ben Whalley is producer and director. Mark Cooper is the producer for the BBC. Susan Lacy is the creator and executive producer of American Masters. 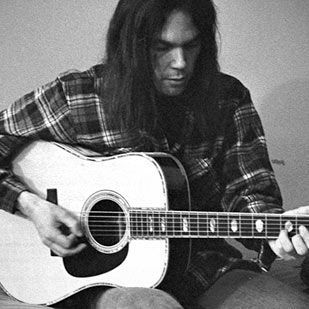 Neil Young’s archive reveals much about an artist we thought we knew well.
Live at Massey Hall 1971

Genius Within: The Inner Life of Glenn Gould
Yours For a Song: The Women of Tin Pan Alley
Sarah Vaughan: The Divine One
Ray Charles: The Genius of Soul
Tony Bennett: The Music Never Ends
Muddy Waters: Can't be Satisfied