The Grammy-winning bassist Israel “Cachao” Lopez died in Coral Gables, Florida in March 2008, almost 90-years old. A maestro of legendary status on the world stage and ultimately considered one of the greatest Afro-Cuban musicians of all time, he had made his home in the United States for the past four decades. Coming from a family of classical musicians, he had formal conservatory training and held a seat in the Havana Philharmonic Orchestra for 30 years, performing under the direction of all of the legendary international conductors of the time – beginning at age 10! American Masters pays tribute to the Father of Mambo in the series’ bilingual film, Cachao: Uno Más premiering Monday, September 20, 2010 at 9 p.m. (ET) on PBS (check local listings). The film is produced, narrated and illuminated by the actor Andy Garcia, a close friend and ardent fan, who helped re-establish Cachao’s career in the ‘90s. Among the film’s many treats is Garcia playing the bongos with Cachao.

“Cachao’s stature is peerless,” says Susan Lacy, series creator and executive producer of American Masters, a seven-time winner of the Emmy Award for Outstanding Primetime Non-Fiction Series. “There are few who have come close to his legacy. What American Masters does best is to capture an artist’s creative process. It’s extraordinary to see Cachao’s impeccable improvisations on stage and in the studio.” The heart of the film is a sold-out 2005 concert at Bimbo’s 365 Club, a famous San Francisco nightclub. Shot with nine cameras, bathed in warm lighting, with pitch-perfect sound recording and mixing, Cachao’s infectious warmth and musical genius is palpable. Woven throughout the film is Cachao reminiscing about his remarkable life over lunch with Garcia and saxophonist Ray Santos. Other voices, including Cachao’s daughter Elena, his driver, and fellow musicians such as percussionist and historian John Santos and Gloria and Emilio Estefan, shed light on his near nine-decade contribution to world music. As Garcia says, “You can put [Cachao] right next to Louis Armstrong, Dizzy Gillespie, Charles Mingus, and Charlie Parker. That’s the lexicon of the names that he’s up there with.”

“I think we would be a less rich musical country if we were not to really embrace and applaud and enjoy the music Cachao has contributed to the world and most definitely to America,” notes Grammy-winning singer/songwriter Gloria Estefan.

Cachao: Uno Más takes viewers from his start as a child prodigy in Cuba to his personal struggles in Vegas to his triumph as a world-class composer. A classical musician by day, he always had a double life at night, playing the Havana clubs and dance halls with his brother Orestes. Together, they revolutionized the heart of Cuban music – first in the late 1930s, literally inventing the mambo from the stately Cuban danzón – and later in the 1950s, at highly electric descargas cubanas – Cuban jam sessions – their spontaneous improvisations and innovations laid the groundwork for contemporary Latin jazz and salsa, rock ‘n roll and rhythm and blues. Around this time, Cachao wrote “Chanchullo” which contained the signature hook appropriated in Tito Puente’s classic hit “Oye Como Va,” later made popular in Carlos Santana’s hit crossover cover.

Cachao became an exile shortly after Fidel Castro came into power in 1962. He relocated to New York and played with leading Latin bands. As the ‘70s wore on, his life hit a sour note in Vegas, where he headlined casinos and battled his growing gambling habit.

Eventually, he settled in Miami as a forgotten artist, playing for tips at local venues. He slowly slipped into obscurity in the ‘80s until Garcia helped revive an appreciation of Cachao and his music and reinvigorated his career in the ‘90s. Their musical collaboration culminated in a series of Grammy-winning albums, cementing Cachao’s well-deserved recognition in the industry.

In his final years, Cachao received numerous honors including a Hispanic Heritage Award, a National Endowment for the Arts Award, a star on Hollywood Walk of Fame and an induction into the Smithsonian Institute. In the words of John Santos, “Underlying his consummate professional demeanor, he [was] a sage and poker-faced philosopher…warmth, humor and humility [were] his trademarks.” 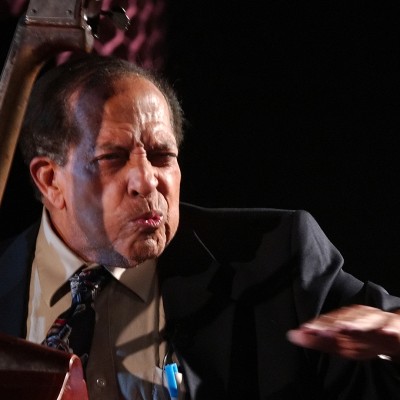