Q. What first got you interested in doing a film about Carol Burnett?

A. I have been a fan of Carol Burnett for years. I know that American Masters has wanted to do a film about her for a long time. She is such a natural subject for American Masters because of the breadth of her career. She is, of course, an American comedy icon. But she is also a fantastic singer, talented actor and now an accomplished writer. There aren’t that many artists with that kind of range and we wanted to do justice to that.

Q. When did you first become aware of Carol Burnett?

A. I grew up in the 70s on my family’s couch every Saturday night watching the Carol Burnett Show. I was thrilled to be staying up so late, but more than that I loved the show. I loved watching Carol inhabit all these different characters and I especially loved watching the cast try to keep a straight face during the sketches. You felt like you were being included in the fun – it was a very inclusive style of comedy.

Q. While making the film, did you learn anything that surprised you about the subject?

A. I was pretty well-versed in The Carol Burnett Show lore, but I had never had the opportunity to see much of Carol’s early work. I especially enjoyed watching all the Gary Moore Show appearances. Here she was in her 20s and yet that talent was already so developed. She was so physical and broad and yet there was always a certain vulnerability there that made her so relatable.

Also, I knew she was a singer, but I don’t think I fully realized what a great singer she is. There was one song she sang in her special with Julie Andrews (Meantime, which is not in the film) that was just a knockout performance. Her voice is great but she also projects such real emotion when she sings and you feel that.

Q. Are there any interesting anecdotes about the filming or the interviewees?

A. We filmed one of Carol’s live performances in Santa Barbara that was sort of patterned on the Q&A sessions she used to do at the beginning of her variety show. It’s always tricky to film a live performance that hinges on audience interaction because you never know what you’re going to get. Of course Carol was wonderful and can handle any question, but there was such a real and magical moment at the end when a young girl ended up coming on stage and sitting with Carol. It was one of those moments you can’t plan for, but it just makes the event come alive on film.

Q. Please describe you approach to the film.

A. Carol has been asked every question imaginable over the years so we decided to use that to our advantage. We used her Q&As (from both her old show and from the new performance we filmed earlier this year) as the framing device for the film. We were able to jump around in time by using audience questions to introduce different events or themes from her life. It freed us from doing a more traditional, chronological structure.

Q. What were some of the obstacles in achieving your vision of the film?

A. Scouring through all eleven seasons of The Carol Burnett Show and the many appearances on The Garry Moore Show and other programs was both a treat and very labor intensive. There were many instances where Carol or another Interviewee would reference a specific story or sketch and we would dig through the archives to find the material that supported their comments. It was a lot of work but it’s hard to think of it as “work” when you’re sitting there laughing all day long.

Q. Please describe your background credits, and how they led to this film.

A. I have been making documentaries for about fifteen years on all manner if subjects from war journalists to women’s history, but most recently I was fortunate enough to do an American Masters on Bob Newhart. I know I’m no comedy expert and I can’t tell a joke to save my life, but I am a good audience and I love to laugh so moving from Bob Newhart to Carol Burnett was a thrill. 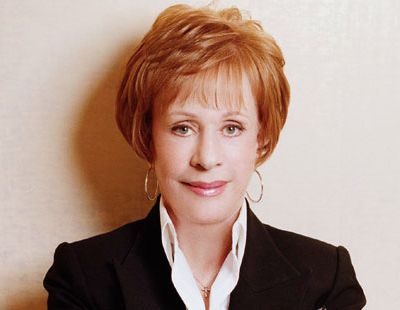 Lena Horne: In her Own Words
Inspiring Women
Edward R. Murrow: This Reporter
Joan Rivers: A Piece of Work
Buster Keaton: A Hard Act to Follow
Nichols & May: Take Two