Talia Smith looks at the influence “The Carol Burnett Show” had on generations of comedians and audiences. Written as part of the American Masters Digital Archive project, this essay draws on original interviews conducted for “Carol Burnett: A Woman of Character” directed by Kyra Thompson, including extensive conversations with Phyllis Diller, Garry Shandling, Betty White and Carol Burnett herself. 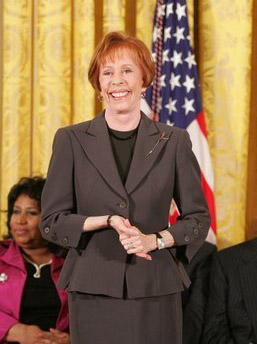 Carol Burnett at ceremony for the Recipients of the Presidential Medal of Freedom. Photo by Paul Morse.

“Little girls, little girls, everywhere I look I can see them,” bellowed the voice of Carol Burnett through my television set.

The malicious, yet endearing, quality of Burnett’s Ms. Hannigan character in the 1982 film “Annie,” captivated me as a little girl. I just could not understand how someone so funny and musical could be so mean. Mean, yet hilarious. She could sing, yet she didn’t take herself too seriously. Carol Burnett’s Ms. Hannigan was an iconic part of my growing up. The irony is, “mean” is not a word anyone would use to describe the real life Burnett.

I don’t know when I learned about Carol Burnett outside of “Annie,” but it seems to be that she has always been there. Her humor, physicality and voice have been omnipresent. I wish I could remember the first time I saw her iconic “Went with the Wind” sketch or heard her sing with Julie Andrews. What I do remember is watching and learning how a strong woman could command a stage.

“I’m so glad we had this time together,” are not only the concluding lyrics to each episode of “The Carol Burnett Show,” but is the sentiment reflected by the interviewees in “Carol Burnett: A Woman of Character.” Funny, smart, charismatic and relatable, Burnett has been bringing people joy for decades. While many who grew up watching Burnett on both the big and silver screens can reflect on the comedy, excitement and personality that she brought to America’s television sets, her friends and colleagues interviewed reaffirm that not only is she great to watch, but she is a loving, hardworking and hilarious woman in real life, too.

The production team and stars, including Vicki Lawrence, Tim Conway and Harvey Korman, along with Burnett herself, reminisce about the magic of the show’s creation. Other interviewees have had the opportunity to work with Burnett, meet her, or just admire the content that she created.

For Vicki Lawrence, who was told throughout school that she bore a striking resemblance to Burnett, getting a job on the show as a teenager was equivalent to attending the “Harvard School of Comedy in front of America,” because she got to work so closely with some of the greatest comedians of her time, while becoming one herself. “Everything wonderful in my life,” she says, “I owe to Carol.” Lawrence discusses Burnett’s selflessness in the writing room and the opportunities she received because of Burnett’s influence.

Lawrence’s cast mates agree that Burnett was not only the star of the show, but the heart. The cast raved about Burnett’s selflessness and willingness to do what it takes to foster not only great comedy, but a great working environment as well. Tim Conway and Harvey Korman, two of the shows leading players, both remarked how “The Carol Burnett Show” ran so smoothly and how that was unlike anything else they’ve worked on.

Despite being on air during the height of the Second Wave Feminist Movement, Burnett refused to take jabs at anything overtly political. In the opinion of the cast, hosting her own show was a statement in and of itself, and having a successful show took it to another level. Instead, the comedy in her show was musical and theatrical. The sketches were long and inspired by classic movies and personal experiences of the writers. “Carol would never do well in politics for the simple reason that she is likable,” said Conway.

“You just felt welcomed by the whole show,” said Jon Cryer of “Two and a Half Men,” who grew up watching the show and following Burnett’s career. Her success in show business can be credited to the fact that “she is natural, she is open, she is vulnerable,” said Korman.

The interviews featured in the archive highlight the joyous side of Hollywood. Carol Burnett’s impact on all the interviewees reinforce that she continues to be a hilarious, kind and selfless soul who uses her talents to spread love and laughter. “I worship Carol,” harped Phyllis Diller, a famous comedian in her own right who came up in show business around the same time as Burnett, “everything was right!” 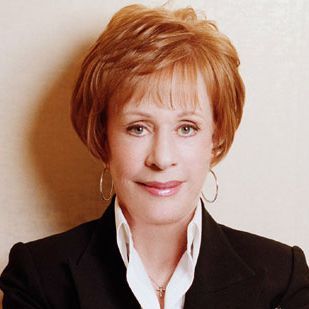