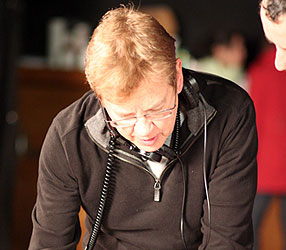 How did you first become involved with Christopher Trumbo and the stage play TRUMBO?

A New York based producer asked me to direct it – this was prior to 9/11, and, I read an early draft of Chris’ play while I was in London directing HEDWIG. Since the play was based on some  of his father’s letters, I ended up reading all of them, some 600 pages. Hedwig during the day, Trumbo at night, I didn’t get out much, but it was a lot of fun.

How familiar were you with the work of Dalton Trumbo when you took on directing the play?

I’d seen a few of this movies. PAPILLON is still a favorite and stands up because of the performances  of Hoffman and McQueen, which feel so contemporary. I had also seen EXODUS, and, of course SPARTACUS and ROMAN HOLIDAY. I had also read JOHNNY GOT HIS GUN in school. But, I’d never read any of his letters, I just new he was one of the Hollywood Ten.

What is it about Trumbo’s writing in particular that piqued your interest?

God, what doesn’t? His wit, certainly, but also his eloquence, his rage, his bawdy sense of humor. Above all, perhaps, his courage, his fearlessness, a clear sense of passion in what he believed was the right way, the principled way, for a man to live.

What was the motivation for bringing Dalton Trumbo’s story to the big screen and carrying along with it the performative letter-reading aspect of the stage production?

Well, the letters had to be central to anything we did. They are great, absolutely unique material for actors to work with which had they had been proven that on stage. And, they told a story about a man, an American, defending himself and his family, during an extraordinary period in American history. The story of the blacklist has been told before, but Trumbo’s letters gave us access to a unique perspective on it. When we started finding interviews with Trumbo himself, we knew we had something.

What can you tell us about the casting process and bringing in A-list actors to participate in the documentary?

As we found with the play, actors really responded to the letters as terrific dramatic material. The only real challenge was finding time in their schedule. Nathan (Lane), Brian (Dennehy), and Paul (Giamatti) had done the play, and they committed early. Others were reached, sometimes through personal contacts. But, again, it was the material that hooked them, even more than the politics it represented.

What about Dalton Trumbo’s persecution by the HUAC and thus the Hollywood power structure as a whole struck you as timeless?

As I said, I read the letters prior to 9/11, before the Bush-Gore campaign, before the events of the Florida re-count hanging chad, before the Patriot Act and Iraq. Now, of course, Trumbo’s words ring prophetic, and his fight against the perversion of American ideals that held sway at the height of the Cold War has new immediacy. The cost to personal freedoms feels as threatening as anything George Orwell could have predicted.

What lessons can be learned from Trumbo’s strength in standing up for what he believed in, even at the expense of prison time and the many hardships his family was put through?

Trumbo believed in the Constitution and its Amendments and he never, ever wavered from that. No one ever doubted where Trumbo stood on issues. Those beliefs, those principles, gave him the strength to endure hard times. His strength gave strength to others – compare that constancy to some of the political waffling that goes on today.

As HUAC stifled Trumbo’s primary creative outlet, he took his skills and eccentricities to the more personal and private mode of letter writing.  How did you choose to approach the familial aspect of Trumbo’s story, in particular in relation to Christopher and Mitzi Trumbo, his two children and two primary subjects of your film?

I’ve now known Chris now for more than six years, and, we’ve worked on this material, in one form or another for that long.  It’s still hard for me to get him to talk about the more personal aspects of his relationship with his father, and God knows I’ve tried. He’s understandably careful about what is said and done with his father – and his family story.  But, the film version benefited from the level of trust we established during the play. It probably also helped in getting Mitzi to agree to be interviewed because she had never done so before. Mitzi’s participation gave us access to the family photo library and almost all the family stills in the film were taken by either Mitzi or her mother, Cleo.

As the writer of the play, how involved was Christopher Trumbo in piecing together his father’s and therefore, his own story for the documentary?

Simply put, we wouldn’t have been able to make this film without him. He has an encyclopedic knowledge of his father’s life and the time in which he lived and was able to guide us in the choice of letters, how to edit them, in some cases combine them, and contextualize them. This is what Chris did for the play, and even though he played a less active role in that aspect of the film, the blueprint was there.

While you worked on the stage play and had the benefit of first-hand accounts from Christopher Trumbo, how did you go about researching the rest of the story, particularly in regards to the inner workings of the HUAC and Hollywood?

This aspect of the film followed a more traditional path. A lot of archival research through increasingly disparate sources, and, a lot of interviews. Most of both never get used, but you need to do the research anyway so, at the end of the day, you have choices. The film is comprised of four elements; inspired acting performances of Trumbo’s letters, film clips, interviews and archival material. That we found interviews with Trumbo himself in this last category, was extraordinary good luck.

Which Dalton Trumbo scripted films are your favorites?  What themes presented in these films did you want to carry over to the documentary?

My favorite Trumbo films are PAPILLON, LONELY ARE THE BRAVE, SPARTACUS, ROMAN HOLIDAY, A GUY NAMED JOE, THE FIXER and JOHNNY GOT HIS GUN.  Themes that carried over are his loyalty to friends, courage in adversity, idealism, the rights of the individual, anti-war and constancy in one’s beliefs.

How do you feel Trumbo would react to the current state of screenwriting in Hollywood, both in regards to the WGA strike that recently ended and how writers are treated as part of the creative process?

Trumbo was not precious about his screenplays. He never wanted to direct and only did so once, on JOHNNY GOT HIS GUN, although his original choice for that film was Luis Bunuel. As a child of the depression, he believed in the power of the many, hence his interest in Socialism and Communism, but, he was also a Westerner and an individualist.  I expect he would’ve been a loyal supporter of the WGA strike and loyal to writer friends today as he was in the ‘40s. But to friend and foe alike, he would have made his opinions clear, and would not suffer fools kindly. 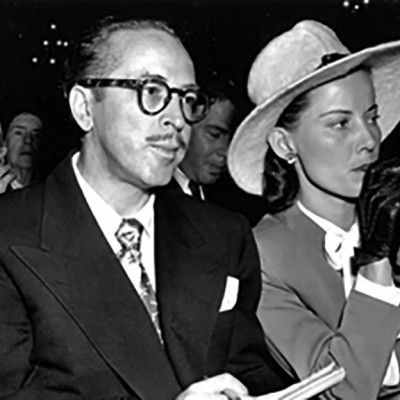