Meet James Watson, the Nobel Prize-winning scientist behind the double helix as he confronts his complex legacy. With unprecedented access to Watson and his family, "American Masters: Decoding Watson" explores his life, achievements, controversies and contradictions.

Thrust into the limelight for discovering the secret of life at age 25 with Francis Crick, influential Nobel Prize-winning scientist James Watson has thrived on making headlines ever since. His discovery of DNA’s structure, the double helix, revolutionized human understanding of how life works. He was a relentless and sometimes ruthless visionary who led the Human Genome project and turned Harvard University and Cold Spring Harbor Laboratory into powerhouses of molecular biology. With unprecedented access to Watson, his wife Elizabeth and sons Rufus and Duncan over the course of a year, American Masters explores Watson’s evolution from socially awkward postdoc to notorious scientific genius to discredited nonagenarian, also interviewing his friends, his colleagues, scientists and historians. Controversial and unapologetic, Watson still thrives on competition and disruption. The film uncovers his signature achievements, complexities and contradictions, including his penchant for expressing unfiltered and objectionable points of view. Directed and produced by Mark Mannucci.

Decoding Watson contains the first interview in which James Watson’s wife, Elizabeth, has spoken candidly and at length about their relationship and their son Rufus’ schizophrenia. The film is also the first time Rufus Watson has been interviewed for a film. 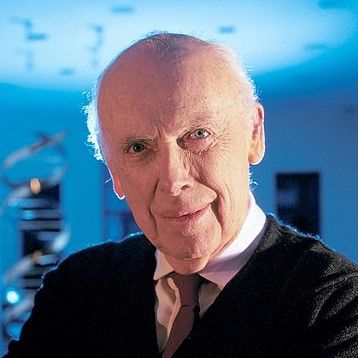 Pop, do you still consider yourself a scientist?

I'm the most accomplished person living on earth.

There are many adjectives one could use to describe Jim Watson.

And humble is probably not the first to jump to your lips.

He discovered the secret of life when he was 25 years old.

I wanted to do something big.

Jim is a radical.

He'll deliberately untie his shoes and mess up his hair to give him what they were paying for *laughs* The book was controversial... just insulting... Francis Crick wouldn't talk to him for years after that book came out but it was a best-seller.

Roslyn Franklin had that famous photograph for eight months and never concluded it was the helix.

Had Jim Watson and Francis Crick stolen her work?

This is clearly unethical behavior in science.

He confesses to have a penchant for pretty girls.

You knew when you heard him that you were at the start of a revolution in understanding.

He was yawning extremely loudly in the first row throughout my talk.

I'm just not afraid to say what I think.

Hubby pie Watson. You know, you said an absent-minded scientist. I imagine it's in his DNA.

Now in this, I'll be labeled as a schizo, right? I mean, that would be truth in advertising, right?

In our school, we had a Meeting of the Minds project... Yea.

Which is basically where people dress up as someone.. like my brother did Beethoven and I did you.

Given my desire to never to stay away from messy problems uh, I was bound to have ... myself sometimes and that's what I did.

He's been put on a pedestal but is the responsibility that comes with being on that pedestal being met?

What's happened? You know, where's the Jim I knew?