Dionne Warwick on Lena Horne and her musical influences

On February 8, 1996, Dionne Warwick discussed her musical influences and the impact that Lena Horne and others had on her career, in this clip from our digital archives. Interview conducted for "American Masters—Lena Horne: In Her Own Words" (1996), directed by Susan Lacy.

On February 8, 1996, Dionne Warwick discussed her musical influences and the impact that Lena Horne and others had on her career, in this clip from our digital archives. Interview conducted for “American Masters—Lena Horne: In Her Own Words” (1996), directed by Susan Lacy. 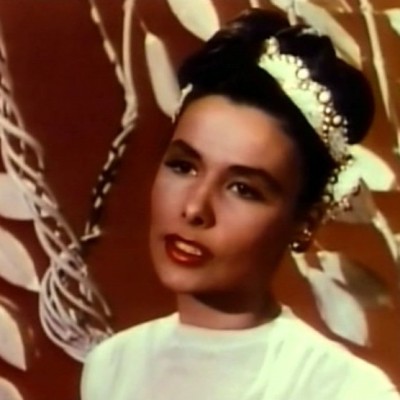 - [Interviewer] Let's talk about how you study.

(Dionne laughs) - I wish I had that damn thing.

- [Interviewer] Tell me about your system of study.

And I know you did this with Lena and other folks.

Tell me about that.

Many more than I had at the time.

And that were at a point in their careers and working in places that I eventually wanted to work in.

I literally would take a yellow legal pad and go sit in the back of the Persian Room and watch Diahann Carroll and Eartha Kitt.

I'd go to the Waldorf, I'd watch Johnny Mathis, I'd watch Lena Horne.

And I'd go to the Copa and see Sammy Davis Jr and Frank Sinatra.

I mean, the list of places that I would go, if my car could get me there with my pad and pencil, I would be there, in the shadows, taking notes.

Watching how they moved on a stage.

Listening to what they said before a song, how they would set up a song.

Their choices of material.

How they related to an audience.

And I think that I learned very well.

Lena was a major influence in my classes.

Just the mere fact of how she walked out on the stage the first time you saw her.

What she had on, what she said to the audience, the choice of songs.

Any movement at all that she made.

The things that she said between songs to set up the next song made a great difference in the way that I perform and the things I say, and the way I look and the way I feel I command my stage.

So I'd have to say that she was one of my major professors.

On my 16th birthday, Lena Horne was at the Waldorf Astoria.

And it was part of her farewell performances, as a matter of fact.

And as my birthday gift, my parents took me to see her.

And I have to say, it was probably the greatest of influences on me, with regards to the business that I am now in, which is show business, that has ever taken place.

I think that that was probably one of the best gifts I've ever gotten.

- [Interviewer] What was so special about this performance?

- Watching Lena Horne then, and even to this very day, there was a majestic command of those boards, that stage she was on.

You knew that she was in command.

From the very moment she walked on, to the last bow.

The way she moved.

I mean, absolutely one of the most divine people in the world to look at.

And from a vocal point of view, as well, doing what she was doing, I had not heard anybody doing that kind of thing better.

- [Interviewer] Now when you were in London, you went to see her, and you had a big surprise waiting for you back stage.

- [Interviewer] Could you tell me about that?

And I was doing a television show.

And I was informed that Lena Horne was in town.

And the young man who was doing the show with me as well, his name was Sacha Distel, said that it would be wonderful if he and his friends could go along with us.

So we made reservations and we got to a place called The Talk of the Town, which unfortunately no longer exists.

But we had dinner, and we were talking about who she is, Lena Horne, and the contributions she's made, et cetera, et cetera.

And during the course of the conversation, Sacha said to me, 'Obviously, you're gonna go back stage after.'

He says, 'Well, let's make a pact here 'so that we're not back stage 'forever and ever and ever.

'If she happens to say, ''I have every recording you've ever made,' 'we will say 'Thank you very much ''for a wonderful performance,' and we'll leave.'

He says, 'Because that happens to be the M.O.

'of most of our superstars.'

So I said 'Okay, I have no problem with that.'

And we went backstage, and Lennie Hayton, who was her husband and also her conductor arranger at the time, was performing with her.

Greeted us at the dressing room area, and had us sit in there, where she was gonna receive our company.

And we were sitting there, just kind of talking back and forth and I had walked with Lennie on 'Valley of the Dolls.'

He was the music coordinator for MGM Records, Movies at the time.

So we had a lot to reminisce about.

And in walks Lena.

And she sat on the corner of the chair that Lennie was sitting in.

And we were, how much we enjoyed the show, introduced her to Sacha and to Claude and a few other people that were with us.

As a matter of fact, Catherine Deneuve was with us as well.

And she was very cordial, very inviting.

And she said, 'And you,' pointing at me.

She says, 'I have every record you've ever made.'

Well, it really kind of stunned me, and my heart just fell to my stomach.

And I looked over at Sacha, and he looked at me.

She says, 'And you don't believe me.'

And proceeded to tell me them.

'I not only know about your recordings, 'I know that you're going to Paris.

'And you're gonna be at the Olympia.

'I know where you're going after you leave Paris, 'and a few other places after that even.'

Which made me feel terrific.

And she says, 'I followed your career.

'I've watched the way you've handled it, 'the steps you're making, 'and it makes me feel good 'to let you know that you're one of my children.

And believe me, she has.

- [Interviewer] What is it that you call her sometimes?

- [Interviewer] She was the role model for a lot of black women.

And often, she couldn't really be the full Lena.

Did you ever get a sense of that, in terms of the person that she presented to the public?

The person that she presented on a night club stage, versus the person that we then saw in 'The Lady and Her Music'? Did you ever get a feeling for that?

- The sense of her that I happen to have, personally, might be a little different than somebody else that doesn't know her as well as I do, or for the length of time that I've known her, or have had the opportunity to be in her company, not only because she's performing somewhere.

I've had dinner with her.

She's been in my home.

She loves my children.

I know her grandchildren very well.

I know her daughter.

So there's another kind of a relationship that we have.

It's something, unfortunately, she can't get away from.

She's been looked at by me, and by so many others, as the person that I would most like to not only imitate but emanate in my persona when dealing with people on whatever level it has to be dealt with.

It's a very difficult role to play.

And I, fortunately, am smart enough to understand that she cannot be all things to all people.

She has to be a human being too.

So there's gonna be those moments of frailties, and of mistakes.

But that's only human.

And if you're not bright enough to understand those things, or put such a charge on people that they have to be one way all the time, then that's not being fair.

But she will, unfortunately, always be that role model that so many of us, who are already in the industry, and those who are bright enough to understand that that's the image that we all want, or should be, will look for her to portray.

- [Interviewer] As you were growing up, hearing about Lena Horne, what was the image... Was your mother a fan of hers?

- Yes, my family, my entire family were fans of Lena Horne, and still are.

In my house, musically, it ran the gamut of music.

My family had gospel singers.

So obviously, I know 99% of every single gospel singer that ever breathed a breath or sang a note.

I mean, it just ran the gamut.

My cousins, who were recording artists at the time, The Monotones, recorded 'The Book of Love.'

So you know, we had a wide range of music within our homes.

And Lena Horne was very much a part of that.

I had the privilege of calling Sarah Vaughan Aunt Sassy.

My mother went to school with her.

They got their hair done at the same hairdresser.

So I have been a very fortunate young lady, in that I've been exposed to people in this industry who were not only mega stars, but were mega human beings.

And were so warm and wonderful to me.

I was known as the baby.

And to this very day, I hope it's taken an effect in my persona and the way that I perform, and the information that I am able to impart to others who ask for it.