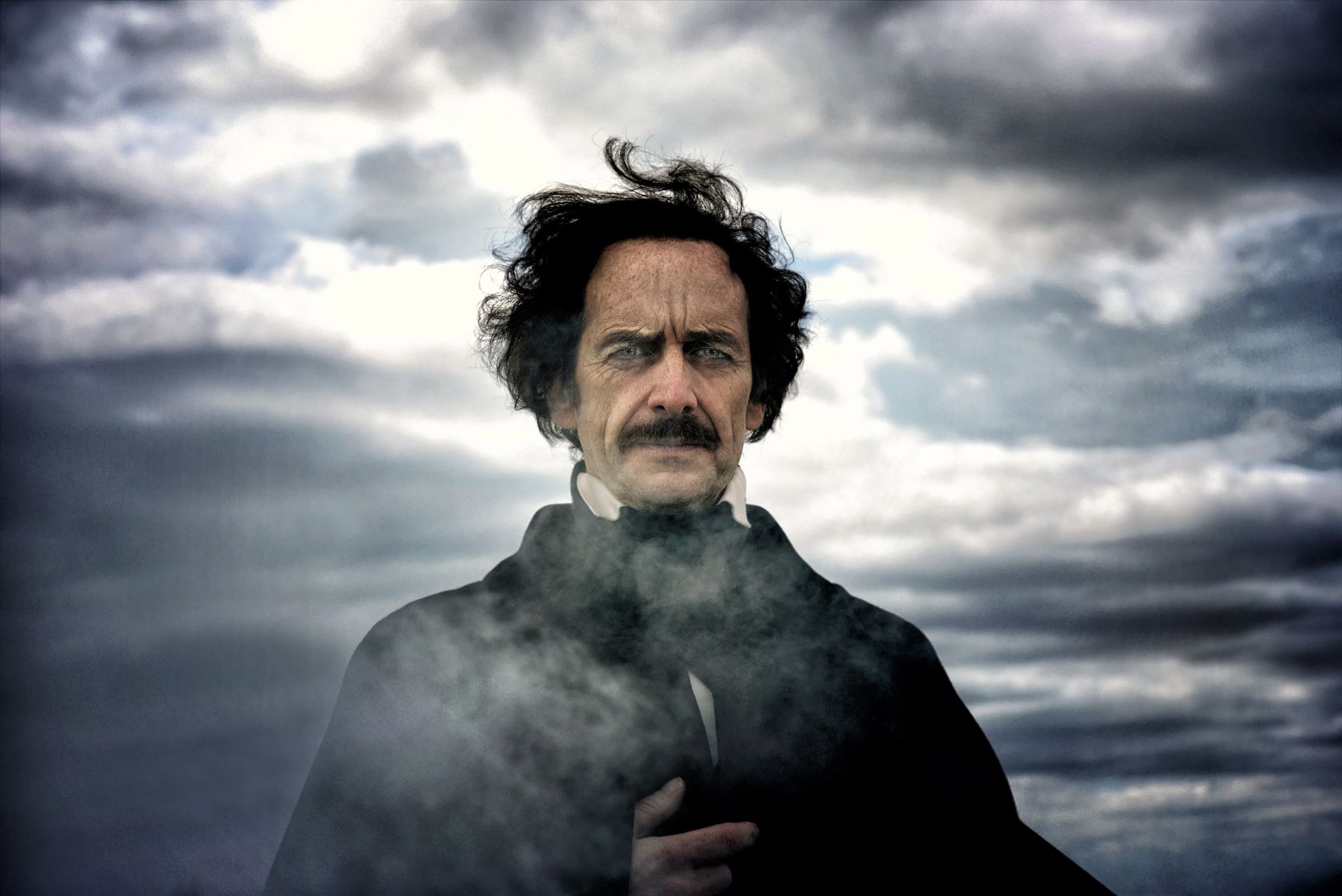 1811 – Poe’s father, David Poe, Jr., abandons his family and disappears. A few months later, the Placide and Green Company, a traveling acting troupe, brings Elizabeth Poe and her children to Richmond, Virginia. In December, Poe’s mother dies and Poe is taken into the care of John and Frances Allan in Richmond, Virginia, while his older brother, William, is sent to the Poe family in Baltimore and his young sister, Rosalie, is taken to the home of William and Jane Scott Mackenzie in Richmond.

1815 – Poe moves to England with John and Frances Allan. Their journey by ship takes about four weeks. John Allan expects to stay in England for several years to develop new business for his general merchant and tobacco trading firm, Ellis & Allan.

1816 – Poe enters the boarding school of the Misses Dubourg. He would later name the laundress in The Murders in the Rue Morgue Pauline Dubourg.

1818 – Poe is enrolled at the Manor House School in Stoke Newington. Poe’s experience at the school would later inspire his short story William Wilson.

1820 – Poe and the Allans board the sailing ship Martha and begin their journey back to Richmond, Virginia. In September, Poe continues his education under the tutelage of Joseph H. Clarke, who would later recount, “While the other boys wrote mere mechanical verses, Poe wrote genuine poetry: the boy was a born poet.” His fellow students also remember him for his poetic skill, as well as his athletic prowess in swimming, boxing and running.

1827 – After a series of quarrels with John Allan, Poe leaves Richmond for Boston where he enlists in the U.S. Army under the alias Edgar A. Perry. He is stationed at Fort Independence at Castle Island in Boston, where he serves as an occupation clerk. Poe’s first book of poetry, Tamerlane and Other Poems, is published by Boston publisher Calvin F.S. Thomas.

1828 – Poe is stationed at Fort Moultrie in South Carolina.

1831 – Poe admits to John Allan that he plans to resign from West Point and requests his permission. He then neglects his studies, which results in a court martial. He is dismissed from West Point. Poe’s third book of poems, Poems, is published in New York. The book is dedicated to “The U.S. Corps of Cadets.” Poe returns to Baltimore to live with his aunt Maria Clemm, his cousin Virginia, and his brother Henry, who dies in August.

1833 – The Baltimore Saturday Visiter announces Poe’s short story MS. Found in a Bottle as the winner of its short story contest.  Poe wins a $50 prize and the newspaper publishes the story.

1834 – Poe reportedly visits John Allan, who is gravely ill, however Allan refuses to see him. When John Allan dies later this year, he does not name Poe in his will.

1835 – Poe’s short story Berenice is published in the Southern Literary Messenger. Shortly thereafter, he begins writing literary reviews for the journal, returning to Richmond in August to serve as an editor. Shortly thereafter, Poe’s aunt Maria Clemm and cousin Virginia join him in Richmond.

1837 – Thomas White dismisses Poe from his editorial position at the Southern Literary Messenger. The magazine proceeds to publish Poe’s only novel, The Narrative of Arthur Gordon Pym, in serialized installments.

1838 – Poe and his family move to Philadelphia. The first issue of the American Museum magazine includes Poe’s tale Ligeia.

1840 – Poe begins to circulate a prospectus for his own journal, The Penn Magazine, but becomes extremely ill and is forced to postpone its publication.

1841 – Poe accepts an offer to be the book review editor for Graham’s Magazine for a salary of $800 per year. Shortly thereafter, Poe invents the detective story with The Murders in the Rue Morgue, which appears in the April issue of Graham’s Magazine. Poe meets fellow literary critic and editor Rufus W. Griswold.

1842 – Virginia Poe becomes ill with tuberculosis. Friends and acquaintances remark that Poe is drinking heavily. He resigns from Graham’s Magazine and George R. Graham hires Rufus W. Griswold as the magazine’s new editor. In the same month, Griswold’s anthology The Poets and Poetry of America is published. It contains only three of Poe’s poems. At Griswold’s own request, Poe writes a review of The Poets and Poetry of America. His review is fair, but not the laudatory review that Griswold expected.

1843 – Poe’s short story The Tell-Tale Heart is published in the first issue of James Russell Lowell’s Boston magazine, The Pioneer. Poe also resumes soliciting investors for his own magazine, now titled the Stylus. Poe wins first prize in Dollar Newspaper’s literary contest for his short story The Gold-Bug and receives a $100 prize. Following the popularity of The Gold-Bug, a collection of Poe’s stories, titled The Prose Romances of Edgar A. Poe, is published by William H. Graham. Poe’s story The Black Cat is featured on the first page of The Saturday Evening Post. In November, Poe begins a lecture tour with a talk on American poetry. His Philadelphia lecture is sold out.

1844 – Poe and Virginia leave Philadelphia for New York. They find lodging and send for Maria Clemm. Poe sells The Balloon-Hoax to the New York Sun. Published anonymously, the story leads the public to believe that a small crew of men has crossed the Atlantic Ocean in a hot air balloon. Poe becomes assistant to the editor of the Evening Mirror.

1845 – The Raven is first published in the American Review as well as the Evening Mirror under the pseudonym “Quarles.” The poem is extremely popular. Poe and Rufus Griswold meet again and Griswold requests of Poe additional poems to include in a new edition of The Poets and Poetry of America, as well as short stories to include in a new publication, Prose Writers of America. In March, Poe begins attending Anne C. Lynch’s gatherings of New York literati. He develops a friendship with Frances Sargent Osgood, and they exchange flirtatious poems in the pages of New York’s literary magazines.

Poe’s negative review of Henry W. Longfellow’s The Spanish Student appears in the American Review. This is the latest in a series of critical reviews Poe has written about the beloved poet. In October, Poe is invited to lecture at the Boston Lyceum. He is expected to read an original poem, but instead he gives a rambling apology and reads one of his earliest poems, Al Araaf. At least one Boston reviewer lambastes him, and Poe responds with public letters highly critical of Boston and Bostonians.

1846 – The Raven and Other Poems, a collection of Poe’s work, is released in England. At home, the New York literary circles begin to scrutinize Poe’s close friendships with Mrs. Osgood, and Mrs. Elizabeth Ellet. Anne C. Lynch withdraws his invitation to her literary soirees. Poe, Virginia and Maria leave the city for a country cottage in Fordham, New York. Several newspapers report that Poe is ill with “brain fever.” Poe himself writes that he is experiencing “continued ill health, with a pressure of engagements.” Poe engages a literary “battle in print” with some of his fellow writers over his review of their peers, The Literati of New York City. Poe sues the proprietors of the Evening Mirror and the Weekly Mirror for libel.

1847 – Virginia dies of tuberculosis. Poe is devastated and suffers from his own ill health. The Superior Court hears Poe’s libel suit against the Evening Mirror and the Weekly Mirror. The Court rules in Poe’s favor and awards him $225 in damages. 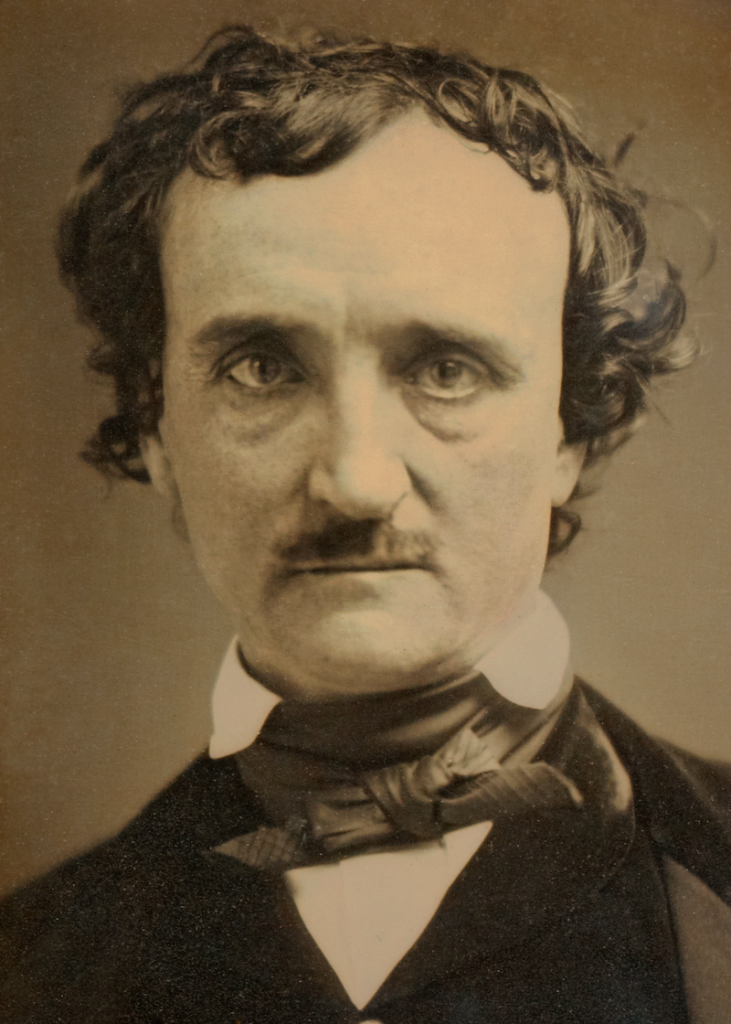 Edgar Allan Poe. A recurrent theme in his writing is death and mourning.

1848 – Poe becomes acquainted with Sarah Helen Whitman and Annie Richmond. After several months of exchanging letters and poems with Whitman, Poe proposes marriage, but she declines. Poe admits he loves both women and, in a moment of despair, takes laudanum in an attempted suicide. In the following days, he recovers and sits for a daguerreotype, now known as the “Ultima Thule” daguerreotype.

Poe returns to Providence and Sarah Helen Whitman agrees to marry Poe on the condition that he remains sober. When Whitman learns that Poe has been drinking, she breaks their engagement.

1849 – Poe reunites with his childhood sweetheart, Elmira Royster Shelton, who is now a wealthy widow. He proposes marriage, and in September, Shelton accepts. Poe writes to Maria Clemm to inform her of the impending marriage and his upcoming trip back to New York to fetch her for the wedding. He leaves by steamship on September 27. His plan is to disembark in Baltimore in order to board the train north to Philadelphia and New York.

Poe’s whereabouts are unknown in the days following his arrival in Baltimore. On October 3, he is found at a local tavern, ill, disheveled and incoherent. Baltimore editor Joseph Snodgrass is called and Poe is admitted to Washington College Hospital, only to die four days later, October 7, without regaining his reason. There has never been a conclusive diagnosis or cause of death.