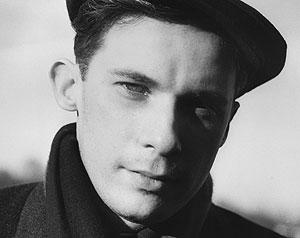 Gould, the artist as a young man photographed by his close friend John P.L. Roberts. Toronto.

1932 – Glenn Herbert Gold is born in Toronto on September 25 to Florence Greig and Russell Herbert (Bert) Gold. (The family changed its surname to “Gould” around 1939).

1947 – On October 20, Gould gives his first public professional solo recital, held in Eaton Auditorium, Toronto. He is now managed by Walter Homburger. Around this time, the Gould family acquires one of the earliest tape recorders, and Gould begins eagerly to explore the new technology and document his playing.

1949 – Gould decides to become a concert pianist under tutor Alberto Guererro, whom he clashes with over his singing and flamboyant style.

1952 – Gould ends his piano lessons with Guerrero. For the next few years, he spends an increasing amount of time living at his family’s cottage, practicing, thinking, reading, composing, and generally preparing himself for an adult career as a musician.

1955 – Gould gives his New York debut recital in Town Hall on January 11. The following day, he is offered an exclusive recording contract with Columbia.

1956 – In January, Columbia releases Gould’s recording of Bach’s Goldberg Variations. It is released to almost universal critical and popular acclaim, launching his international career as a recording and concert artist.

1957 – On May 7, he begins his first European tour and becomes the first North American pianist to perform in the Soviet Union since WWII.

1959 – At age 27, Gould finally moves out of his parents’ home, at first, into the Windsor Arms Hotel. On August 31, he gives his last public performance in Europe at the L.

1960 – Gould spends the first half of the year living at the Algiers Apartments on Avenue Road, and then moves into a penthouse (No. 902) at The Park Lane Apartments, 100 St. Clair Avenue West – his home for the rest of his life.

1962 – Gould meets Cornelia Foss, a painter and the wife of Lukas Foss, a composer and pianist Gould greatly admires. He befriends the couple. By 1964, his friendship with Cornelia has evolved into the most important romance of his life. Gould performs a controversial Brahms concert with Leonard Bernstein in New York with very slow tempi. His performance, and the conductor Leonard Bernstein’s pre-concert speech alluding to their differences over interpretation, provokes criticism in the press.

1968 – The performer-manager relationship between Glenn Gould and Walter Homburger ends.

1968 – Cornelia Foss leaves her husband Lukas and brings her two children to live in Toronto to be close to Gould. They intend to marry.

1971 – On January 10, Gould records his first session in Eaton Auditorium, Toronto, where he will make most of his recordings for the rest of his life. Around this time, he also hires a personal assistant, Ray Roberts, who becomes a close friend.

1979 – “Glenn Gould’s Toronto” (part of the series “Cities”) appears on CBC-TV on September 27. The program receives two ACTRA awards and is nominated for a GENIE award in 1980.

1982 – CBS releases Gould’s new recording of the Goldberg Variations. The album wins two GRAMMY awards and a JUNO award in 1983, as well as a Gold Disc from the Canadian Recording Industry Association in 1984. In the summer, he conducts a recording of the chamber version of Wagner’s Siegfried Idyll for CBS.