About the Group Theatre

The Group Theatre was conceived as a response to what 3 idealists saw as the old-fashioned light entertainment that dominated the theater of the late 1920’s. 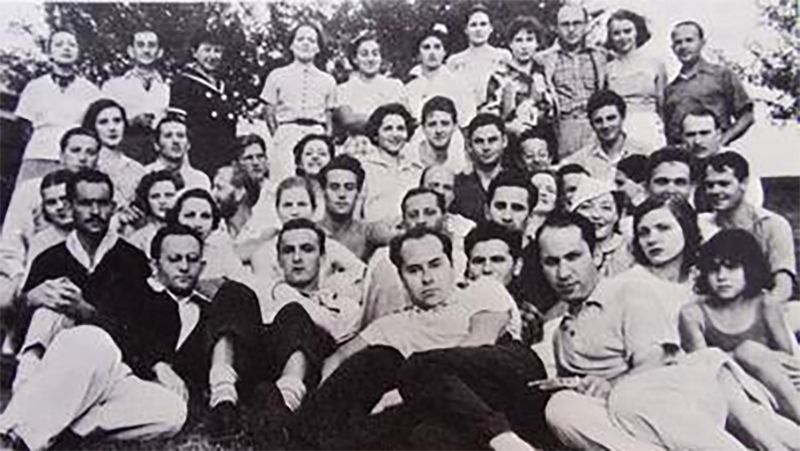 In the summer of 1931, three young idealists, Harold Clurman, Cheryl Crawford and Lee Strasberg, were inspired by a passionate dream of transforming the American theater. They recruited 28 actors to form a permanent ensemble dedicated to dramatizing the life of their times. They conceived The Group Theatre as a response to what they saw as the old-fashioned light entertainment that dominated the theater of the late 1920’s. Their vision was of a new theater that would mount original American plays to mirror — even change — the life of their troubled times. Over its ten years and twenty productions, they not only met these goals, but altered the course of American theater forever.

The Group Theatre was a company based on an ensemble approach to acting. First seen in the work of the Moscow Art Theater, the ensemble approach proposed a highly personal and cooperative method. That individual actors played individual parts was no longer important. The focus was on a cast that was familiar and believable as a whole. If the actors had relationships off-stage, then the relationships on stage would not only seem, but be more “real.” As the members of the ensemble grew to know each other, this familiarity was successfully reflected in their work.

Based on the innovative techniques of the Russian master Constantin Stanislavsky, Lee Strasberg came up with “the method.” The method, or “method acting”, as it has come to be known, proposed a series of physical and psychological exercises. It held, for example, that if a part called for fear, the actor must remember fear and bring this honest emotion to the stage. These exercises were meant to break down the actor’s barrier between life on and off the stage. By the time the curtain came down on their first production, “The House of Connelly”, the Group Theater knew they had succeeded. What was important was not simply the enthusiastic response, but that the audience and reviewers had recognized that this one performance signaled a shift in American theater.

The Group Theatre believed what they were doing to be of great political significance. While disregarding the calls for individual fame in an embrace of cooperation. It was not, however, until Clifford Odets, then an actor in the group, wrote “Awake and Sing!” that they found their full voice. His highly charged plays, which were often expressed in the language and circumstances of working-class characters, mirrored the essence of what the group wanted to be and do, fulfilling the dream of a theater speaking to and for its audience. Both audience and critics responded enthusiastically, and such works as “Awake and Sing!,” “Waiting for Lefty, ” and “Paradise Lost” were among the most memorable productions of the decade.

By the late 1930’s however, the cohesiveness of the group began to crumble. The chronic financial problems and long-simmering disputes about “the method” began to chip away at their solidarity. An attempt to solve their financial problems that sent many of the actors to Hollywood (where some stayed) ended in the resignation of both Lee Strasberg and Cheryl Crawford. As a last resort, Harold Clurman decided to take on Hollywood stars in an attempt to enhance box office appeal. To many long-time members this seemed a compromise of the fundamental ideals of the group. Even the financial success of Clifford Odets’ “Golden Boy” in 1937 was not enough to halt the decline, and in 1941 the group dissolved.

Despite its relatively short life span, The Group Theatre has been called the bravest and single most significant experiment in the history of American theater, and its impact continues to be felt. Many of the group’s members went on to become leading acting teachers and directors, passing on to subsequent generations the spirit and principles that motivated them. Stella Adler, Lee Strasberg, Sanford Meisner, and Robert Lewis have counted among their students actors, directors, and playwrights such as Marlon Brando, James Dean, Paul Newman, Meryl Streep, Gregory Peck, and David Mamet. To this day institutions such as the Actors Studio, founded by Cheryl Crawford, Elia Kazan, and Robert Lewis continue the tradition of The Group Theatre.

About Harold Clurman
About Sanford Meisner
About Stella Adler
Greenwich Village: A Hub for American Masters