In 1981, Twyla Tharp commissioned David Byrne of the Talking Heads to write music for a Broadway show featuring Tharp’s modern choreography. Not only did Tharp push the well-trained dancers to their limits, she pushed David Byrne, he says, more than anyone had before. 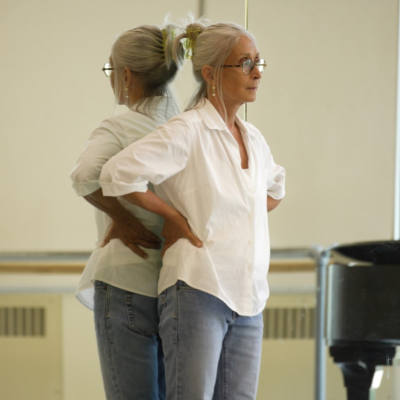 (David Byrne's 'His Wife Refused' begins) ♪ A great big house-with nothing in it. ♪ He comes home says, 'Now wait a minute.'

He's comin' in... (song continues in background) - [Twyla] I commissioned David Byrne to write the score.

It was his first independent work, apart from the Talking Heads.

- [David] She wanted to do a full length, evening length piece.

That was a big gulp for me.

I mean, that's a lot of music.

This was kind of putting a stake in the ground and saying, contemporary dance can be on Broadway.

Which meant I was rehearsing during the day, and then in recording studios with him working at night.

Stop talking, help us get ready.

(song continues in background) - [David] I could tell that she would drive the dancers pretty hard.

These are top-notch, trained dancers, and she would push them to the limits of what they could do physically.

And, they'd get that, and she'd push them further.

And see if they could go further.

- To get through the whole evening, it was, you had to get yourself much more mentally prepared than I've ever had to before.

- Well, it's the longest piece I've ever done.

- [David] There was worries of whether we'd get through the evening.

And I said, 'No, just you go listen to more Bach.

We're not done yet.'

- [David] I'd never had anyone push me like that before.

Turned out to be really good for me.

♪ And on the second day, there was nothing else we could hold.

Oh, what a day that was.

(song continues in background) - [David] I got a taste of how a show like this got put together.

And watching Twyla manage all that was incredibly influential to me, because not too long after that, I started working with Talking Heads on staging a show, and so, this was maybe the beginning of me starting to exercise those muscles creatively.